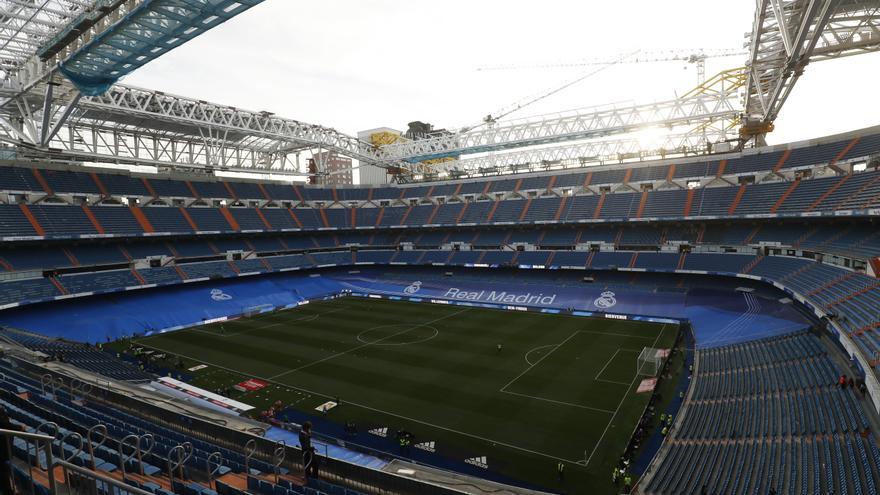 560 days later the public returned to a Santiago Bernabéu, which shows the skeleton of what will be in the future with some trusses that astonished the madridistas and onlookers who came to the vicinity of the stadium and its interior, where the excitement grew in the pre-match tribute to Lorenzo Sanz, former president of Real Madrid between 1995 and 2000 and the rest of those who died during the pandemic.

Almost everything has changed since that March 1 in which the Santiago Bernabéu was filled for the classic against Barcelona, which ended with a victory by two goals to zero for the team at that time trained by the French Zinedine Zidane.

The situation that the stadium works are experiencing meant that, even three hours before the game, accesses were still being set up for the public and elements of them were removed in the vicinity to allow the passage of people.

No crowds except when the fans wanted to welcome the Real Madrid bus, although security measures separated them by about 300 meters. Just after, an hour and a half before the match, the 20,000 fans in a staggered manner to try to maintain a safe distance.

For this, numerous previous accesses, in which it was essential to show the entry in digital format, Among those who also appeared several people advertising their businesses adjacent to the Santiago Bernabéu and who have seen themselves alone in these 560 days.

In the bowels of the Santiago Bernabéu, concrete predominated, the result of the current state of the works and so different from the final plan that, according to forecasts, it is expected to be ready by mid-December 2022.

At the first glance, as soon as you look inside again, the remodel is immediately visible. The trusses dominate the aerial view, the third and fourth amphitheater on the east side, just above the press area in which a roofing system was installed in case of rain, it no longer exists and almost the entire lower tier of the background The south is covered with a tarp, as well as the west side.

For the public and the press, security measures are maximum for this type of event. Safety distance and mandatory mask at all times except when you want to drink, but in no case eat.

After this acclimatization to what had previously become routine, the Madridistas were able to welcome their team after a long time apart. Karim Benzema and Luka Modric got the biggest ovation, with indifference regarding the figure of Eden Hazard and illusion with the latest signing, the Frenchman Eduardo Camavinga.

Then came the most emotional moment of the night, the tribute to Lorenzo Sanz. The club made a canvas with his face that occupied the entire center circle and club legends such as Iker Casillas, Fernando Hierro, Chendo, Michel Salgado and Pedrag Mijatović, among others, they took to the field with the seven titles that were achieved during their tenure.

After this, the 20,000 fans who gathered at the Santiago Bernabéu went from joy and shouts to receive the team when they jumped onto the pitch to the minute of silence as a token of respect and memory of those who died due to the Covid- 19.