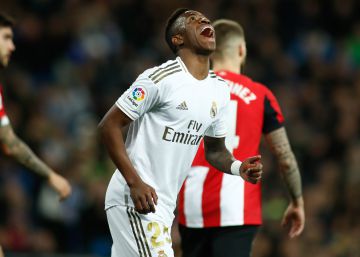 In addition to Athletic, in Santiago Bernabéu there was another enemy, this invisible. He was notified of the displeasure of his presence when he was announced by public address system, even if it was to remember the reasons for his existence. The issuance of the VAR performance protocol, the announcement of the referee in charge of the VOR and that of the collegiate at field level were even more whistled than the names of the rojiblancos players. All were received with the sound reproaches of an audience that does not forget the two plays of the Camp Nou that were not marked as penalties and that generated an unease that could even with the cold that also appeared punctual to the appointment.

The Real Madrid fan made it clear that any technical decision would receive his corresponding sentence, even if the party did not generate disconcerting situations and even decided in favor of Madrid at the time of canceling a Kodro goal for offside. He had nothing to do yesterday's encounter with that of Barcelona, ​​to the point that Zidane modified the composition of his eleven, which gave Vinicius and Rodrygo a start entry.

The two Brazilians were part of the four changes, which Zidane introduced with respect to the team that tied for the Camp Nou classic - the others were Militão for Varane and Modric for Casemiro. If both live permanently united to a comparison that does not stop, seeing them at the same time on the green showed that they are two completely opposite players. Faced with a closed defense such as Athletic, with Lekue and Yuri joining the line of three centrals, once the danger was detected, each used their weapons to try to overcome their mark. Vinicius turned to his explosiveness, to that rocket that light his legs, to face without fear. Rodrygo, on the other hand, was somewhat more withdrawn in terms of direct confrontation and diversified his resources. Encaró when he saw field, but threw centers with dry ankle movements and generated superiority looking for walls with Carvajal.

He foresaw a party to the Garitano approach and raised in response a kind of retractable net that complicated Benzema's life. The French tried to act as a reference for his companions, like a lighthouse near the coast. He invited Athletic to the center, strong and prepared for the clash (none of his players measured less than 180 centimeters), although he lived on the oxygen delivered by the interventions of Unai Simón, capitals to continue breathing until rest. However, Madrid tried to adapt to the storm surge, adding the largest number of players to the attack. Without Casemiro, sanctioned for card accumulation, Valverde served as a replacement for the Brazilian, although with the free anchor.

Faced with the buttoning of the Athletic space, Vinicius resorted to that waist dance without comparison but without definition that raised the audience even with his mistakes. The Brazilian lives connected to the spirit of the stands and changed the pulse of criticism. His were the most celebrated bankruptcies of the game, more than any other cut that threw a span of Simon although the auction failed. Just the opposite as Rodrygo, with less effervescent blood, but with the same ability to find water in the middle of the desert. Despite this temperance, Zidane decided to replace him with Bale, ending the dance between two players who are rarely observed closely on the field. Vinicius did not last much longer, that he retired due to some hamstring discomfort and that before leaving he had time to raise his arms demanding passion from the public. The problem is that all that energy already had an identified receptor.