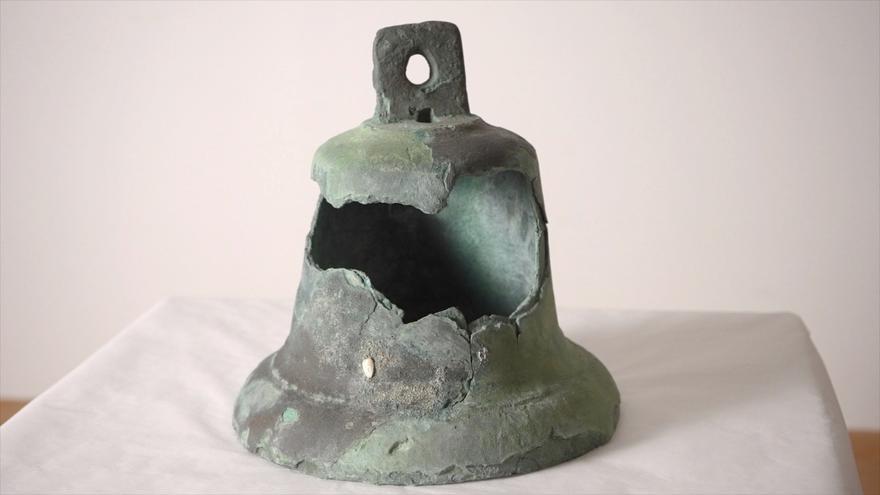 Miami, Sep 13 (EFE) .- A bell that is believed to have belonged to the “Santa María”, the largest of the three ships on the voyage of discovery of America in 1492, will be put up for sale at a private auction in Miami by its discoverer, the Italian ex-seaman and diver Roberto Mazzara.

In a statement released Monday, Mazzara, who found the bell in 1994 off the coast of northern Portugal and has kept it in a safe place in Miami since 2006, noted that “there is no doubt about the authenticity of this historic gem.”

The bell, weighing less than 31 pounds (14.07 kilos) and less than 10 inches (25.4 centimeters) in diameter, has a value that, according to Sotheby’s and Christie’s appraisers, is at least 100 million euros. dollars, adds the former Italian Navy officer.

Mazzara suffered the confiscation of the object that he now wants to sell, but he recovered it thanks to a court ruling in Spain in 2006.

According to the statement, the tests carried out by the University of Zaragoza on the chemical composition of the metal of the bell, the archives of the Indies in Seville and Simancas (Spain) and documents that point to the Casa de Contratación del Rey, which recorded all the maritime traffic between Spain and America, “they coincide in the origin of the bell.”

“As I grew up with the documentaries of Jaques Cousteau, I have always loved the mysteries of the seas and, as a professional diver, I was able to unite these two passions when the search for this bell was first introduced to me almost 30 years ago,” Mazzara noted. .

“The auction will be a wonderful opportunity to give collectors the opportunity to own a unique piece of history,” he said without specifying when and where it will take place.

In the first decade of the 21st century, Mazzara tried to auction the bell of the caravel Santa María in Spain for a symbolic starting price of one million dollars, but the sale was provisionally suspended by the Spanish justice due to a request from the Portuguese Government.

Portugal demanded in February 2004 the application of a European directive for the “restitution of a cultural property that left the territory of a Member State of the European Union illegally”.

But in 2006, a Madrid court dismissed the claim, because it was not filed within the established deadlines, and returned the bell to Mazzara, who had found it in 1994 in front of the port of Buarcos, in Figueira da Foz (Portugal).

The bell was placed on the keel of a Spanish ship, the San Salvador, which sank in 1555 off the coast of Portugal on the way to Spain.

The bell of Santa María was part of the equipment of the fort that was built with the remains of the ship when it ran aground on the north coast of the island of Hispaniola, in an area that today is part of Haiti.

The discoverer of America, Christopher Columbus, left 39 sailors there and when in 1493 he returned on his second voyage he found that the Indians had burned the fort, called Navidad, and killed all the Spaniards.

The bell was sold years later, according to a document that appeared in Puerto Rico, where its purchase is recorded for a high amount for its time (32 pesos), and it is embarked on the San Salvador ship, captained by Gonzalo de Carvajal to Spain. .

Tags: auctioned, campaign, holy, it will be, Maria, miami, ship