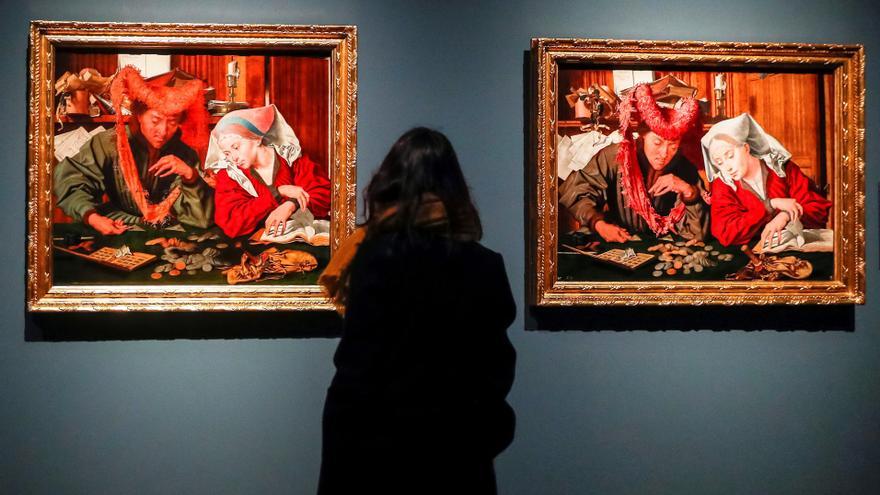 Madrid, Mar 8 (EFE) .- The name of Marinus van Reymerswale does not say much, but his paintings have been illustrating economics manuals and financial texts for decades. The enigmatic Flemish painter, who dedicated himself to portraying the effervescent financial world of Antwerp in the 16th century, stars in his first exhibition at the Prado Museum.

“Marinus: Painter of Reymerswale” is a small-format exhibition and will be on view until June 13 at the Madrid museum. In total, there are a dozen paintings featuring lawyers, tax collectors, money changers, bankers and other characters who were portrayed in enigmatic scenes by this unknown painter.

“The money changer and his wife” is one of his most recognizable and famous works in the show. Property of the Prado, it has been restored for the occasion along with the rest of his works, and is an icon of the history books of the economy and financial manuals of all time.

In it, a woman and her husband count money at a table full of gold and silver coins and accounting books. The characters appear dressed in eccentric clothes, large colorful hats and enigmatic cartoonish gestures.

The scenes, very theatrical, have traditionally been considered a “representation of greed” or a reflection of ambition, but recent research seeks to expand that conception, in the words of Christine Seidel, curator of the show.

Seidel, a curator of painting until 1800, received a scholarship at the Prado from the Maria Cristina Masaveu Peterson Foundation in the Prado in 2018 to study the work of the unknown artist, which has been scarcely studied despite the relevance and originality of his scenes. .

The curator believes the set of works can help the general public to get to know the author and his work, the financial environment of the time, but also the material culture of his time.

The starting point of the show is the five paintings that the Marinus museum in Madrid has housed, and has been completed with five other works from the Louvre, the Hermitage, the Thyssen-Bornemisza or the Museum of Fine Arts in Ghent, as well as a small collection of coins and engravings of the time to contextualize the work of the unknown artist.

“All the paintings have been restored and studied for the exhibition,” explains its curator. Although small, the list of paintings included accounts for more than a third of all works attributed to the author in the world, to which only 26 works are attributed worldwide.

The restoration process of the works as a whole has helped to obtain new data on this little-known author, especially regarding his copying technique, since his works used to be repetitions of the same scene.

In the exhibition there are two versions of “The money changer and his wife”, and three of “Saint Jerome in his cell”, clearly influenced by the portraits of Dürer.

“We have managed to better outline Marinus’ way of painting,” he explains, “how he copies his paintings, he used traces and grids to repeat the motifs.”

Along with the magnificent “The Moneychanger and His Wife”, there are also iconic scenes from Marinus such as “The Municipal Treasurer”, which comes from the Hermitage; and “The Tax Collectors” of the Louvre.

In these last two two characters appear: while one works calmly, the other looks at the viewer with a defiant attitude. Everything always accompanied by a multitude of books and innumerable types of coins, which Van Reymerswale copied with great detail.