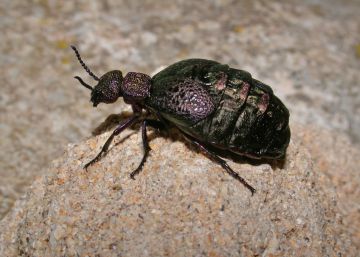 Climate change is taking ahead to large numbers of insects. But it is not the only element of extermination. The agricultural fields converted into large areas of monocultures and the fumigations linked to urbanism without control make up the perfect storm of its decline. Although the bad letters are not distributed equally, according to the studies of a group of scientists from the Superior Council of Scientific Investigations (CSIC), which compares for years the situation of some species of beetles in the Iberian Peninsula and Morocco.

Among them are the Tenebrionids, a few flying beetles They arrived in the Iberian Peninsula more than 60 million years ago and managed to bring forward a lineage of 179 endemic species. Step by step, they traversed the centuries and became one of the most important groups of beetles, occupying the entire peninsula, from the coasts to the mountains. A time of prosperity that comes to an end at a speed of vertigo.

The Spanish lineage is currently immersed in a process of extinction caused by man. However, in Morocco, they are still easy to find. "It is clear that something is happening with these insects in the Iberian Peninsula that does not occur in the neighboring country, therefore, it does not have to do with climate change, which affects both states equally," explained Mario García Paris, researcher of the Superior Council of Scientific Investigations (CSIC), in the National Congress of Entomology.

The scientists have carried out genetic studies of both populations and have no doubt: "they are from the same family and with the same physiological needs". What is happening with the Spaniards? "The only relevant point between both countries that could make the difference between living or agonizing is the different agricultural management and land use," he responds. In Spain there has been an intensification of crops, with an increase in the use of insecticides, in addition to an urban development "unbridled on the Mediterranean coast," says Garcia Paris. One of the fundamental problems, he adds, is that the crops "continue to be thrown out of everything, to the point that the ditches are fumigated. They do not leave the insects nor that redoubt. "

In addition, the field is abandoned and filled with macro-exploitations that make disappear the borders with the neighbor, in which insects lived. "As for fumigations, it's as simple as thinking about the processionary. You kill her, but you take on all the other butterflies that live in the forest, "he says. The researcher believes that it is necessary to study agricultural management in greater depth. "They are insects that are associated with grasses, so the change to the cultivation of barley or rye was not a problem. His sentence came from the hand of mechanization, fumigations or conversion into irrigation.

It is not the only case that the group of experts has found. The center of Spain (Madrid, Toledo, Cuenca …) was plagued at the beginning of the last century by another beetle on Mylabris uhagoni. They traced them for five years. They found nothing. "The last copy of which we have record is of 1956 taken in Getafe, this bug is extinct," he describes. It is not the same in Morocco where a sister species lives. "It's everywhere, you're looking for them and you see dozens and dozens of copies." Another clue that the situation is not due to climate change.

The evolution of the coleoptera Meloe cavensis, very abundant at the end of the last century in Andalusia, follows the same pattern. Now there are two locations, in Jaén and Almería and, perhaps, one in Murcia. "Once again, the same thing happens, you go to Morocco and you find it on all sides, from the coastal plains to the mountains."

Eduardo Galante, president of the Spanish Association of Entomology, corroborates that these disappearances are linked to the development of the last 50 years. "The coast has been occupied by cementing the territory, agriculture has become intensive with high production, together with uncontrolled mass tourism," he says. Factors linked to an economic development that has not happened, at least in Morocco, and that has preserved insects. Because "we can not attribute everything to climate change, which is the thermometer of nature that gives the signs that something is happening".