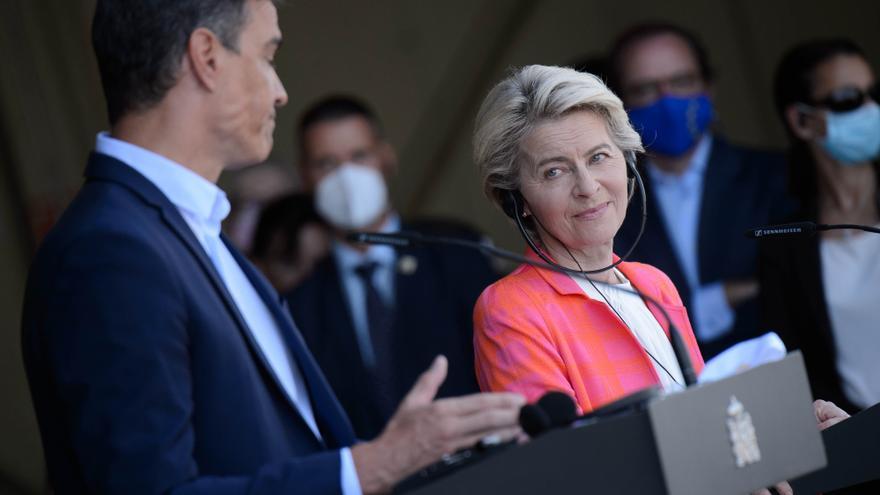 The problem has crept into the first item on the Eurogroup’s agenda this Monday. To such an extent that the director of the EU Agency for the Coordination of Energy Regulators (ACER), Christian Zinglersen, will inform the finance ministers of the euro zone on the recent evolution of energy prices, which it’s driving inflation across Europe as well as wreaking havoc on households.

The community sources consulted acknowledge that they do not expect great conclusions on Monday, but, as explained in the Spanish economic vice presidency, “the important thing is that the debate takes place.”

Spain is one of the countries that is pushing the most to involve the European Union in solving the price escalation, while the electricity market is common in the EU: “It is an important issue to be seen at the European level, it is a common challenge and there must be a common solution. The fact that it is discussed is relevant, and it is an element that will be recurrent in the discussions from now on. The main thing is to wait for the reaction of the European Commission, which has already announced that it will present a toolbox for possible measures “.

The point of this Monday in the Eurogroup is for discussion, so there will be a debate among the 19. “We are waiting for the contribution of the discussions,” acknowledges the Spanish Government: “It is important that there be a rich discussion of our arguments, of the measures presented and a preview of positions and a discussion. We want the discussion to focus on the issue of light. “

The Energy Commissioner, the Estonian Kadri Simson, explained that what they will present will be a series of measures that the Member States can take within the Community legal framework both in the short and long term to cushion electricity prices: “They can be used different measures to help vulnerable consumers, to promote self-consumption and energy, which is the one that is sold at the best price for consumers “.

“Member states are asking for guidance,” Simson said: “And that is why we are also proposing long-term solutions. But in the short term they are willing to take temporary measures in accordance with EU regulations.”

But it will not only be debated this Monday in the Eurogroup, even without the guidance from Brussels. The European Council has already confirmed that it will be a topic on the agenda of the leaders’ summit on October 21 and 22, something that the Spanish Government formally requested.

The President of the Spanish Government himself, Pedro Sánchez, in line with the letter sent by his vice-presidents Nadia Calviño and Teresa Ribera to the European Commission, insisted this Friday on the defense of a European platform to buy gas and constitute strategic reserves. “The Government of Spain has presented to the European Commission a proposal to provide a common response to the rise in wholesale energy prices,” he said at the III La Toja Forum, reports Irene Castro. Sanchez also asked himself: “If the joint purchase of vaccines worked, why don’t we increase our negotiating power by making a joint purchase and a strategic gas reserve in Europe?”

In your non-paper or reflection document sent to the EU, the Spanish Government stated: “Europe’s strategic autonomy is incompatible with the current level of exposure to fluctuations in international energy markets. While we cannot reduce our dependence in the short term, we can and must increase our bargaining power. This requires a centralized European platform to buy natural gas. We have done this quite successfully for vaccines and we should replicate this model in other strategic fields like this one. In addition, we could use our greater negotiating power to build strategic reserves that allow us to mitigate our exposure to market fluctuations. Gas producers are behaving strategically to maximize their profits, we must act together to avoid being at their mercy. This is not only important to contain current energy prices, but also to protect ourselves from producers use energy prices as their tool branch of political negotiation in other matters “.

According to the spokesperson for the European Council, “the current price hike occurs during the recovery from the COVID-19 pandemic, which has severely affected our economies and societies. High energy prices are putting strong pressure on the economy. purchasing power of our citizens. Many families still feel the impact of the consequences of the pandemic. ”

“In the short term,” he continues, “we must focus on the immediate concerns of our households, industry and SMEs. This is primarily the responsibility of the Member States. But we have to discuss how the EU can help. The Commission Has announced a communication on the matter. Member States will discuss this point in preparation for the European Council. In the medium and long term, we must continue to significantly increase our investment in innovation and clean energy. The current situation further underlines the importance of determining a ambitious and realistic path towards meeting our collective climate goals for 2030 and 2050, while ensuring a just green transition that leaves no one behind. “

Iberdrola and Endesa, together with large banks and investment funds, have sent a letter to the European Vice President of the Green Pact, Frans Timmermans; the Vice President of Competition, Margrethe Vestager; and to the European energy commissioner, Kadri Simson, to complain about the measures taken by the Spanish government to lower the price of the electricity bill.

The large energy companies ask the European Commission to overturn the legislation on company profits: the Government seeks to lower the electricity bill by 2,600 million on account of reducing the profits (fallen from the sky) that it has produced to the companies. electricity the increase in the cost of natural gas in other technologies such as renewables, hydroelectric or nuclear.

According to the letter, the large companies that share the electricity market ask that “they do not distort or break the confidence of investors, because the decree could violate Community regulations.” The letter is also signed by the European renewable energy employers and the Association of Large Investment Funds in Infrastructure.

The Second Vice President and Minister of Labor, Yolanda Díaz, has reminded the electricity companies that they have to comply with the law and that they should commit “a little” with the country. In statements to the SER, Díaz has affirmed: “We must give democratic debates, and the large companies of our country cannot question this. This country has to speak loud and clear about economic democracy,” Díaz said. , who has insisted that, according to Eurostat data, the profit on sales of the large Spanish electricity companies is 18.5%, compared to 10.5% of the European average and 5.6% of the German ones.

For her part, the First Vice President and Minister of Economic Affairs and Digital Transformation, Nadia Calviño, has lamented “the surprising lack of sensitivity of some companies” regarding the current situation of high electricity prices and, in light of this, has indicated , which should be in the interest of all energy companies “to accompany the Government in the adoption of measures to cushion the impact on consumers’ bills.” In addition, he stated that “energy companies have to be careful and sensitive given the impact it may have on their public image and reputation in the eyes of the country’s citizens and companies.”

As the Chinese government orders major state-owned energy companies to ensure winter fuel supplies at all costs as the country battles the energy crisis, as published by The Guardian, European economies are also moving. Spain is not the only country that is approving measures to cushion the scale of energy prices.

The French government, for its part, has decided to block increases in gas and electricity prices to ease the pressure, according to Financial Times. In a televised speech on Thursday night, Jean Castex, French Prime Minister, announced that, after an already scheduled 12.6% increase in gasoline prices for Friday, the government would block any further price increases until April.

“We are going to implement what I would call a ‘price shield’ for gas and electricity,” Castex said on TV channel TF1: “We are going to protect ourselves from these price increases.” With the presidential elections scheduled for April and the yellow vests in memory, the government is well aware of the risks that consumers will face higher prices.

The French government had already announced an exceptional energy subsidy of 100 euros for the 5.8 million poorest households in the country, representing 580 million of public spending. Castex said that if measures to freeze energy prices failed to ease the pressure on households, the government would consider increasing this payment.

Eurozone inflation hit a 13-year high last month, and it looks likely to rise further. Inflation in the 19 countries that share the euro accelerated to 3.4% year-on-year in September from 3% the previous month, the highest rise since September 2008 and just ahead of analysts’ expectations of 3, 3%, data from Eurostat, the EU statistical agency.

Prices rose mainly due to an increase in energy costs, mainly a reversal of the oil price drop that took place during the COVID-19 pandemic.

With rising natural gas prices and bottlenecks affecting everything from car production to computer manufacturing, inflation could hit 4% by the end of the year, double the ECB’s target, earlier. of what the bank anticipates will be a relatively rapid decline in early 2022.

For now, the ECB remains true to its narrative that this inflation spurt will pass quickly and price growth will remain below its target for years to come. The president of the ECB, Christine Lagarde, this week has been pointing out that the increase in inflation risks, although she asked for patience and not overreact.