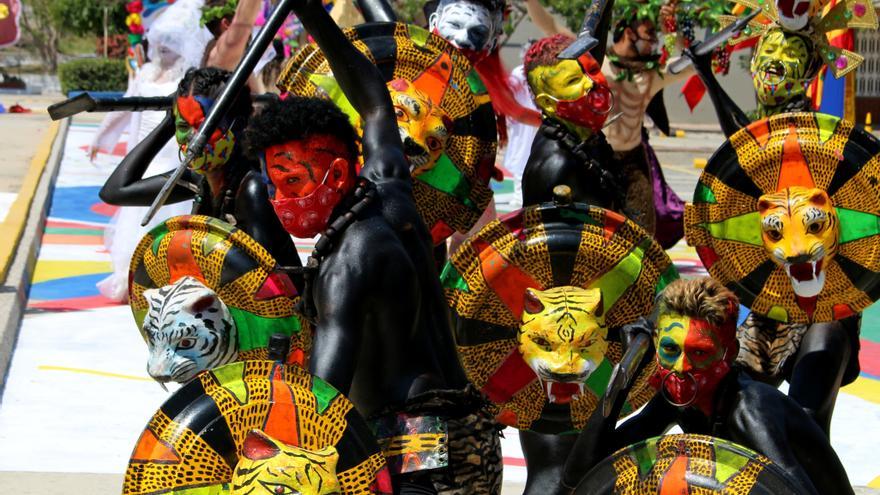 Barranquilla (Colombia), Feb 13 (EFE) .- For 156 years the Barranquilla Carnival has been the popular festival par excellence in which people from all social classes indulge in fun, enjoyment and merriment, but the pandemic The way of celebrating changed and this year the shows went from the streets to the virtual world.

This second weekend of February was marked on the calendar as the traditional Battle of Flowers, the Great Parada or the Carnival of the 44th, festivities that every year bring crowds to the streets of Barranquilla, in the Colombian Caribbean, to witness the waste of color and creativity of folk groups and the exuberance of the costumes of thousands of artists.

However, in this 2021, the most popular party in Colombia, the one with the motto “Who lives it is who enjoys it”, had to be kept for the first time in more than a century and a half and rely on technology to pass the bitter drink from the pandemic with the hope of returning next year in all its glory.

This year it was not possible to carry out the activities prior to the four-day marathon day that, since January 20 with the Lectura del Bando, marked the beginning of the pre-carnival season.

There was neither the Parade of the Guacherna, nor the Children’s Carnival and much less the coronation of the queen because there was no queen, nor was there King Momo, but the party does not turn off.

For the organizers of the Carnival, declared in 2003 “Masterpiece of the oral and intangible heritage of humanity” by Unesco, the artists assume the current situation to create “new spaces and experiences, taking advantage of technology to live and enjoy a different carnival from Barranquilla and from anywhere in the world “.

Carla Celia, Director of Carnaval SA, a company that organizes the party annually, explained that this year’s “will be a Carnival to promote well-being, care, respect and responsibility through various cultural events transmitted by multiple digital platforms” .

He indicated that everyone will be able to enjoy the carnival activities thanks to the transmissions of local television and the “streaming” through the festivity’s web pages, as well as through different applications.

To that end, during this week the different folkloric groups that recorded some of the specials that will be broadcast on the days when the massive parades and concerts were traditionally held at the facilities of a Barranquilla school.

There will be a special Orchestra Festival, another a staging of folk groups, and a presentation of ancestral dances.

GOODBYE TO THE CROWDS

According to Carlos Sojo, who for more than three decades has participated as an organizer of the parties, in addition to the economic losses, for musicians, dancers and artists in general, “not being present” becomes the main challenge for a celebration in the traditionally dominated by crowds, in which physical contact between actors and audience is part of its essence.

“Every year, in the different parades during the four days, more than 750 groups of dancers, musicians and costumes participate and this year for the acts that will be transmitted virtual there will only be about 130, something that will undoubtedly impact the perception of those who live and they enjoy Carnival, “Sojo told Efe.

For local authorities, the role of artists in the reactivation of the creative sector of the city is important, since Carnival is a benchmark of the so-called orange economy, and for that reason the agenda will be extended throughout the year to allow the participation of the different groups in concerts, dances and other virtual activities.

The Secretary of Culture of Barranquilla, María Teresa Fernández, explained that virtuality aims to highlight the aspects that make Carnival an Oral and Intangible Heritage of Humanity.

Angélica Ortega, artistic director of the Dacana fantasy troupe, believes that despite the difficulties caused by covid-19, the commitment to the festivities and tradition motivate them to continue to be linked to this year’s celebrations.

One of the peculiarities that draws the attention of the artists is that this year they all incorporated masks into their wardrobe, which they creatively combined with the showy outfits.

A HIGH IN HISTORY

Due to the covid-19 pandemic, 2021 is the first year in which the face-to-face, live and direct activities of the Carnival that has been celebrated in Barranquilla since 1865 are suspended.

The Battle of Flores, the most colorful of the parades, appeared in 1903, when the country was coming out of the Thousand Day War and was a symbol of the end of the armed conflict. Since then it has become the protagonist of the Carnival with its colorful and joyous passage every year along Via 40, as well as the Great Parade.

The only time the official acts were suspended, but not the popular parades, was in 1947 when a plane crash occurred on Carnival Saturday in which several members of the Barranquilla society died, among whom was the footballer Romelio Martínez whose name was perpetuated in a city stadium.

According to official data, each year at the Barranquilla Carnival more than two and a half million people, including locals and visitors, gather to enjoy the festivities.

This year’s hiatus due to the pandemic will be a severe blow to the finances of the city, the main one in the Colombian Caribbean, since the Carnival moves more than 300,000 million pesos each year (about 86 million dollars) left by more than one million attendees to the different mass shows.