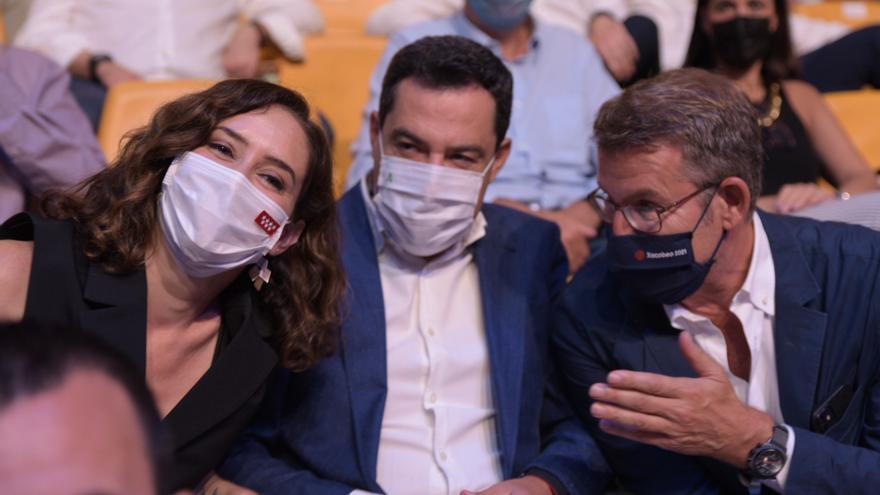 The war between Pablo Casado and Isabel Díaz Ayuso for control of the PP in Madrid has put the other four regional presidents of the party on guard. Since last Thursday, Alberto Núñez Feijóo, Fernando López Miras, Juan Manuel Moreno and Alfonso Fernández Mañueco have publicly intervened in the open conflict since last summer and which threatens to extend until the spring of 2022. The Galician president described it as “noise “, the Andalusian said that it” hurts them electorally “, and the Castilian-Leonese demanded” good sense “and” intelligence “from the two main media figures of his party, whose anger takes the headlines and hides the actions not only of the head of the opposition to the Coalition government, but the rest of the administrations controlled by the PP.

The four regional presidents are the same ones who escorted Ayuso that Saturday in October in which he told Casado not to fear because he had no intention of trying to move the chair of the party president. “I am perfectly clear that my place is in Madrid,” conceded the Madrid president, who perhaps calculated that Casado would thus give him free rein to lead the PP in the region this fall, as he intended. But Casado not only did not give in, but who is determined to keep the pulse.

A month later, the president of Madrid returned to the load in his intention to set the times for the national leadership and advance the party congress as much as possible. The new offensive caused a cataract of leaks to the press in which he even realized that Ayuso has the Secretary General blocked on his WhatsApp, right hand of Casado, Teodoro García Egea.

But not only. It has also caused, it seems, the fatigue of the barons of the PP. The first to open fire was the president of the Xunta de Galicia, Alberto Núñez Feijóo, who recognized that Casado and Ayuso is “noise.” “The noise does not benefit anyone. The noise does not benefit the party and I would like not to participate in it,” he said last Thursday. Perhaps to fulfill his own advice, and true to his style, Feijóo came to agree with both parties. De Ayuso said that “the usual thing is that in Spain the regional presidents preside over their parties in their communities”, one of the unwritten rules that in Madrid has not always been applied. He also noted that “it would be very surprising” that the president “did not want to preside over the party in Madrid.” “Of course, for that you have to win the congress,” he dropped.

But the only baron of the PP that maintains the absolute majority of the expired two-party system also threw a cloak on Casado by stating that “a different thing is when the congress is called.” “It was called for the first quarters of the year and I understand that the party will want to keep the date,” he settled.

On the same November 4, the president of Murcia also asked his party to be “focused on what is important.” Fernando López Miras does not hide his preferences for the national leadership in this battle. Not in vain, the number two Genoa is Murcian, ally and friend of the head of the Executive of the Region, and whom he defended with everything when the PSOE and Ciudadanos promoted the motion of censure against him that gave Ayuso the perfect excuse to call an election that Casado had prohibited him from advancing .

López Miras demanded that the fire friend to “make constructive opposition to the Government”, something that “Pablo Casado and Teodoro García Egea are leading.” The Murcian thus places on the table in public another of the elements that disturb Genoa: the state projection of Ayuso. Against this fear, the Madrid president spoke at the Palau de les Arts in Valencia on October 2 when she said, in a speech that she had written and read in full, “I know that my place is Madrid and that I will do my best for Madrid because Madrid is Spain”. A couple of turns later, López Miras took the microphone, precisely, who visibly annoyed, paraphrased Ayuso to emphasize the message that the candidate had just left to succeed Esperanza Aguirre as leader from Madrid: “President, I’m staying in Murcia too.”

But the main dishes have arrived this weekend in interviews published on Sunday in The world and The reason. In the first, Juan Manuel Moreno unambiguously recognized that “the internal battle of Madrid electorally harms the PP brand“, that is, to himself, who has to face the polls, yes or yes, in 2022. The reason is none other than to divert attention from the” objective “of the PP:” Defeat the policies of Pedro Sánchez. ” Anything that is distracting us from that great objective of political change in Spain I think is a mistake, “declared the Andalusian president, who demanded” that it be resolved as soon as possible “, although without giving a solution:” I am not in Madrid, nor I have the information, nor is that decision for me, but I think the important thing is that this situation is resolved, if it can be, tomorrow. “

Fernández Mañueco, who has also been said to be able to bring the elections forward, pointed in the same direction. “We all have the obligation to preserve the value of unity. All efforts have to be oriented in that line,” he said in the interview, to recognize that “anyone has the legitimacy to choose to preside over the PP. And if you are regional president , of course, you also have it “.

The president of Castilla y León left three more ideas, the last two directed against Ayuso’s proposals. “I hope this situation is solve sensibly and from intelligence“, he said first, implying that neither of the two have shined until now. Second, that the national leadership sets the dates:” There are certain rules of the game. Established by the Board of Directors. And what you have to do is respect the calendar and the rules of the game. “And finally, that there should not be a double round only among militants, as Ayuso’s team has leaked:” The decision will be made by the affiliates and delegates. ” .

In Genoa they say they are prepared for a prolonged war. “This is not going to last seven hours or seven days, but seven months,” they say from the surroundings of Pablo Casado, referring to the fact that the PP congress in Madrid will not arrive until May. Or June.

Those that are going to be celebrated are already those of the multiprovincial autonomous communities. In Aragon, for example, the mayor of Zaragoza, Jorge Azcón, has run with the support of Genoa, which will definitely break the unwritten rule that the organic president is the president of the region or, failing that, the parliamentary leader. . In Galicia, the Secretary General, Miguel Ángel Tellado, said last week that “there is still no congressional calendar planned” and “that it will be decided in the coming months.” And as long as those of these communities are not concluded, those of the uniprovincials will not be addressed.

The most imminent, however, is that of Castilla-La Mancha. The PP will elevate, without internal opposition, Paco Núñez, although the state projection of the election will be, predictably, less because in the reelection of the leader Teodoro García Egea and Isabel Díaz Ayuso will meet again.