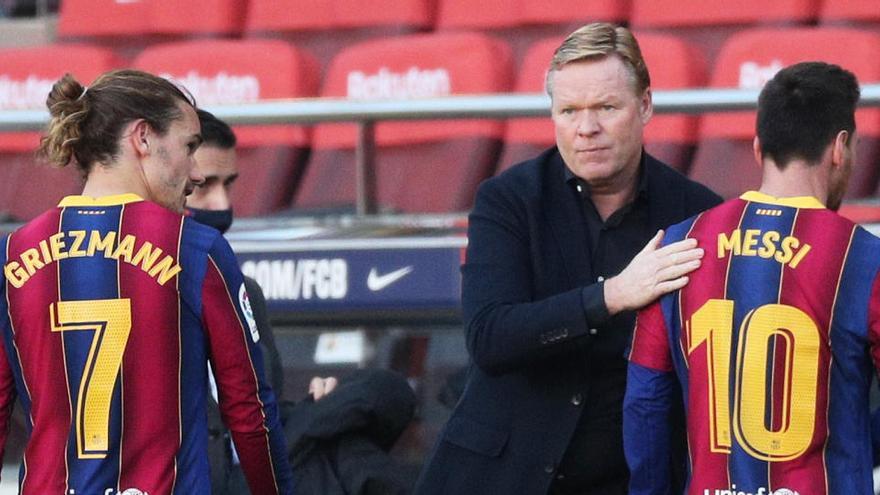 He Barcelona He goes with the loss of Leo Messi to play the last game of his turbulent year 2020, this Tuesday at 7.15pm against an Eibar that arrives at the Camp Nou with emergencies in the lower part from the table of the The league Santander.

After the Christmas break, Barça returns to the pitch to close a blank year, without any title achieved. 2020 has been an ‘annus horribilis’, marked by the debacle in the Champions League against Bayern Munich, the resignation of the board of Josep Maria Bartomeu and the coaches’ dance.

After the dismissal of Ernesto Valverde and Quique Setién, the current Barça coach, Ronald Koeman, intends to establish himself in office with a mixture of good results and attractive game. With this combination, the culés managed to defeat Valladolid (0-3) last Tuesday, in the last league match played.

In Pucela, Koeman hit the mark using a 3-5-2 system, with three centrals and two offensive lanes on the wing. Facing the game against Eibar, the absence of left-back Jordi Alba, who saw the fifth yellow card in Valladolid, becomes a sensitive loss for the 3-5-2 tactical scheme.

The sanction of Alba, who will be replaced by Junior Firpo, could open the door to the return of the 4-3-3 system. However, most likely Koeman molds the team to give continuity to 3-5-2, relying on Firpo for the left lane and repeating with full-back Sergiño Dest on the right wing.

In defense, the line of three centrals will be formed by Óscar Mingueza, Ronald Araújo and Clement Lenglet. In the center of the field, Busquets will play pivot behind De Jong and Pedri González, who showed a good harmony with Messi against Valladolid.

However, against Eibar, the Barça captain is out due to some discomfort in his right ankle and has the club’s permission to extend his vacation in Argentina. This opens the doors of ownership to Phillipe Coutinho to act as a hitch with a front formed by Antoine Griezmann and Martin Braithwaite.

Koeman the letter from Ousmane Dembélé could be reserved as a shock In the second half. After three weeks off due to a right thigh injury, the French attacker will be the main novelty in the Barça squad.

While, Eibar has all the red lights on before this game, and the loss of Messi feeds their aspirations to change the trend of their meetings.

The Gipuzkoan team comes from conceding two consecutive defeats, the first in Ipurua against the Real Madrid and the second in Mendizorroza against Alavés, who have deprived him of the cushion of points that separated him from the relegation places and after these two lost games he has been placed just one point from the places that mean the loss of category at the end of the season.

He Barcelona stadium is not the most historically indicated to start the comeback, given that in the six seasons that Eibar has been in the First Division they have never been able to score in it.

The balance is not much better in the matches in Ipurua, since accumulates five defeats and only one draw, which he achieved in May of last year 2019 to two goals and which has been the only time he has been able to score against Barça.

The precedents therefore do not help and only the fact that Lionel messi, the most unbalancing player that Barça has, does not go to play tomorrow due to an ankle injury according to his club, he can open a small door to the hope of achieving a positive result, although the eibarreses also lose their best player, the young Bryan Gil, afflicted with a common disease.

Eibar will have the already known casualties of José Ángel Valdés ‘Cote’ and Roberto Correa, to which are added those that the last-minute medical services of the club have announced today: Anaitz Arbilla and Kevin Rodrigues due to muscle discomfort and Bryan Gil’s for a “mild common illness.” On the other hand, he recovered defender Paulo Oliveira, Polish midfielder Damian Kadzior and forwards Yoshinori Muto and Sergi Enrich, all of whom were absent in the match against Alavés.

As well recovered in the previous day the midfielder José Recio and the Valladolid forward Quique González, who had been in the dry dock for several weeks and the number of troops that José Luis Mendilibar can count on has therefore increased slightly.

The key: Check if Koeman reinforces his commitment to the 3-5-2 system and gives continuity despite the sensitive loss of Jordi Alba in the left lane.

The phrase: “Our doctor has told us that a week without training will be good for Messi,” Koeman said at the pre-match press conference.

The environment: Messi’s praise for the figure of Koeman and the announcement that he will decide his continuity at Barcelona once the season is over give the fans culé optimism.