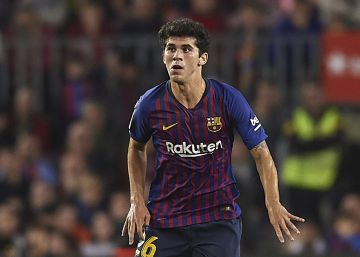 The U-21 team won the European Championship and improved the atmosphere regarding the future of Spanish football. By all appearances, he is in good hands. At the height of his dominance, Spain won the 2010 World Cup, Euro 2012 and two consecutive editions of the U21 European Championship, in 2011 and 2013, a guarantee of generational relief, later breached by the De Gea, Thiago, Isco, Koke, Morata and company. They have not lived up to the forecasts. Whatever the fate of the current champions, a fact is noteworthy: the absence of Barça players.

For the first time since the dawn of time, there has been no representation of Barca, which as its aircraft carrier adds its formidable trajectory as a producer of players. Not only is it a matter of efficiency, proven for decades, but of pride, of distinctive sign in a club where two issues traditionally stand out in the social debate: the game model -cruyffism itself, cruyffismo no- and the representation of the quarry in the first team, both by the number and by its importance.

The golden age of the Spanish team was parallel to the emergence of the best Barça in history, and that team was formed by a team with players trained from children in the club. Not all corresponded to the same generation, but the tour connected them in a fascinating sequence. Xavi and Puyol were succeeded by Iniesta in Barça and in the Under-21 team, where immediately afterwards Cesc Fábregas and Piqué, predecessors of Thiago and Busquets, arrived. Impress the payroll and what they got in football.

It was the summit of a peculiar model: one of the clubs at the head of the world devoted all their effort, intelligence and conviction to print the stamp of success to their quarry. The impact of Barça on the youth categories of the national team has been as brilliant as it was massive, even in recent years, when the worrying current symptoms began to be anticipated. Players like Deulofeu or Munir have been relevant with Spain under-21 and under-19, but his career at the club will be a footnote.

The young Carles Aleñá perfectly defines the fuzzy state of Barça's politics regarding the youth team and the first team. Class player, with a profile that sounds like Barça on all sides, Aleñá runs the risk of becoming a mystery. In January he will turn 22, an age that requires playing many matches or suffer from oxidation due to lack of opportunities. With those ages, Xavi, Iniesta, Busquets, Pedro and Thiago were more than tested. Others did not have enough to continue at Barça, in the case of Jeffren, Muniesa or Montoya, but the diagnosis of their qualities was clear. He knew what his roof was.

Everything indicates that the role of Aleñá next season will be similar to the one that has just ended. Few games, secondary role. In this situation, it is not surprising that he stayed out of the final list of the U-21 team, where almost all players were more than batted, including Dani Olmo, who left Barça at the age of 15 to venture into Dinamo Zagreb. Olmo is also a symptom: one of the many young people that Barça has not been able to or has not managed to retain.

Nothing in the categories of children and youth of Barca indicates that there is a shortage of talent. On the contrary, they usually win tournaments and reach finals, but the track of the quarry is lost more and more. There is no room for them in the first team. Worse yet, there is not the slightest conviction in the club.