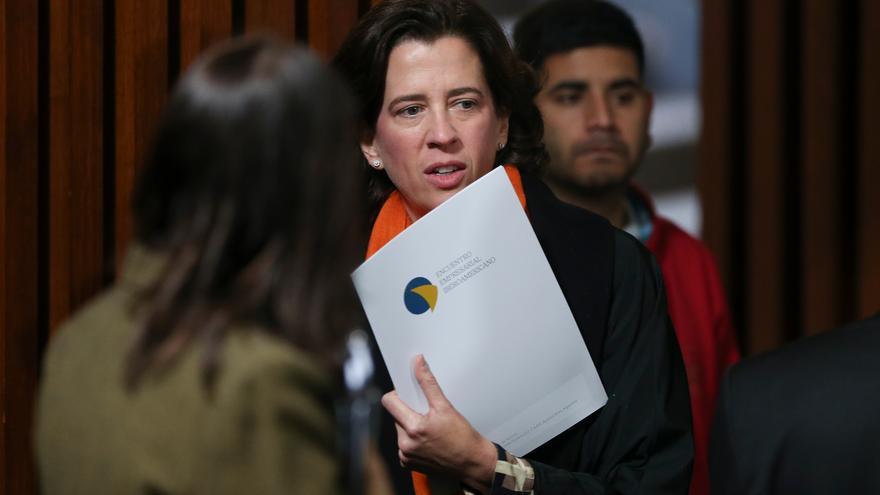 A former Minister of Finance with UCD, a deputy governor of the Bank of Spain and a general director of regulation and financial stability of the supervisor. These three profiles are those of the last three presidents of the Spanish Banking Association (AEB), the employers' association that encompasses Spanish and foreign banks that operate in the country with Santander, BBVA, Sabadell and Bankinter, as its most relevant members. Since the early 1990s, the lobbying role of this organization has made it approach more political profiles or those with links to supervisory bodies. Now, more than 30 years later, the association returns to its origins by once again betting on a director of one of the large banking groups. And, for the first time, a woman will be at the head of the organization.

Alejandra Kindelán has been chosen to succeed José María Roldán, who leaves office this Tuesday after two terms and eight years as the visible face of the association. For the first time, she will be a president who directs the employers' association, at the proposal of Banco Santander, the member with the most power in the AEB. The association's meeting, which is being held this Tuesday, will confirm Kindelán's appointment, announced in February in the face of Roldán's decision not to stand again for a new term, planned for a year. The executives of the sector had already advanced since the beginning of the year their intention to appoint a woman to the position, the first in the history of the AEB.

The new president has a profile closely linked to Banco Santander. The 50-year-old Venezuelan director first came to the group at the now defunct Central Hispano, later absorbed by Santander. Since then, almost three decades have passed in which she has mainly held the responsibility of directing the group's economic studies center, in addition to having been a director of the bank in Argentina and of its consumer loan subsidiary, Santander Consumer Finance. She will now become the visible face of a sector lacking in female leadership beyond the president of Santander, Ana Botín, and the CEO of Bankinter, María Dolores Dancausa. And this despite the fact that it is currently estimated that more than half of the workforce in the sector is made up of women, a percentage that decreases as you climb the pyramid of power of the banks. Of the 26 members that make up the AEB leadership, only four are women.

But, in addition to being the first director to break the association's glass ceiling —he is the fifth person to hold the position—, Kindelán also breaks the inertia of his three predecessors, who came from the public sector. Roldán himself, from whom he takes over this Tuesday, became president of the AEB in 2014 a few months after ceasing to be the general director of regulation and financial stability of the Bank of Spain. It was a controversial appointment, since he came to confront the Minister of the Economy at the time, Luis de Guindos, with the main directors of the financial entities for his commitment to a profile so closely linked to the supervisor in the midst of the financial crisis after the public rescue of The bench. After 13 years in office, he left his supervisor suit to become the lobbyist for the Spanish bank, a revolving door from which Guindos came to make public his "deep discomfort" for not being an "aesthetic" appointment.

Guindos came to propose a reform of the regulation to avoid this transfer from the body to the private sector, which at that time only needed six months of incompatibility, a period with which Roldán complied before assuming his new role, and the Bank of Spain reviewed its system of incompatibilities. In the context of the bank rescue, which had taken place just a year and a half before Roldán became president of the AEB, the Executive came to have the support of the spokesman for economic affairs of the European Commission in those years, Simon O'Connor, who showed that he was "very much in favor" of limiting these revolving doors. Finally, the appointment became effective and, since April 2014, Roldán has served as spokesperson for the bank for sectoral issues that affected his interests, both at a Spanish level and at a European level.

Roland is no exception. His predecessor in office was Miguel Martín Fernández, who since the end of the 1970s held positions such as General Director of the Treasury or, briefly, President of the Official Credit Institute (ICO). After that, he arrived at the Bank of Spain, where he became deputy governor at the time when Ángel Rojo headed the banking supervisor. He remained in the post from 1992 to 2000, returning to the agency a year later for internal oversight. Martín's name even figured among the half dozen alternatives that were considered to replace Rojo, although Jaime Caruana was finally chosen.

Among the issues with which the tandem formed by Rojo and Martín had to deal, the Banesto crisis stood out above all, which ended up being intervened and awarded to Banco Santander. Years later, Rojo ended up as a director of Banco Santander and Martín was promoted to the presidency of the AEB, an appointment endorsed by the entity then chaired by Emilio Botín, BBVA and Banco Popular. The former deputy governor of the Bank of Spain remained the visible face of the banking bosses from 2006 to 2014, coinciding with the first years of the financial crisis that devastated the sector.

Martín had taken over from José Luis Leal, who held the position of assistant to the president of the BBV. However, Leal, like his two successors, also had a step in the public sector. In his case, the economist was a member of the UCD in the transition and with the party he held positions such as general director of economic policy or, for a few months, minister of finance, in one of the remodeling undertaken by Adolfo Suárez de your Executive. To date, he has been the president of the AEB with the most years in the post, which he accessed in 1990 and left in 2006, at the gates of the financial crisis.

With Kindelán, the AEB returns to its origin by choosing a profile without a past in the supervisor or in the Government. Its first president was Rafael Termes, who took over in 1977, in the midst of the Transition, the task of setting up an employers' organization that included the country's private banks. Termes, an economic profile closely linked to Opus Dei, was the CEO of Banco Popular, one of the main private banks in those years, and remained at the head of the employer's association until 1990.

Kindelán assumes the position of representing a very thin sector compared to the one that Roldán inherited when he became president of the AEB. A crisis in between and a tendency to reduce the branch network and staff to a minimum have left the banking sector at a size that represents around half of what it existed in 2006. Now, the next president will have to deal with one of the problems that Roldán has had during the last decade: the loss of reputation of the sector. One of Roldán's last works at the head of the AEB has been the creation of the decalogue of the sector to improve the attention of the bank to the most vulnerable groups, specifically the elderly population.

Kindelán also inherits the eternal debate on the future of the banking bosses. There are currently three in Spain, the AEB, the CECA (former savings banks) and Unacc, which encompasses the rural banks. Ever since the savings banks disappeared and practically all of them became banks, the debate on the merger between the AEB, with Santander, BBVA, Sabadell and Bankinter, and the CECA, today practically monopolized by CaixaBank, has arisen in the sector , an issue that has always been speculated on but has never come to fruition. Thus, the new president of the AEB will have to deal with coexistence with the CECA and with the collaboration with its president, the historic banker Isidro Fainé.