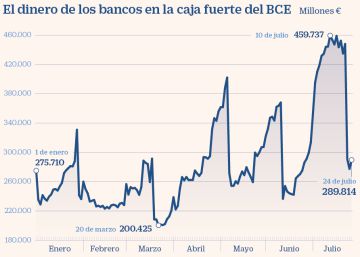 The ECB's mega-injection of liquidity in the remote-controlled auction to give credits (TLTRO) on June 18, for 1.3 billion euros, It has had immediate effects on the balance sheet of the institution. The money from the deposit facility, the sort of piggy bank of the ECB in which the financial institutions deposit their excess liquidity, shot up from 242,000 million euros before the auction to almost 460,000 million - record of 2020 - on 10 July, after the bank received the money. But in the last 10 business days they have decided to take the money out and put it to work. They have withdrawn 170,000 million: the latest data, as of July 24, reveal that the entities have deposited 289,814 million in the ECB.

This is the first step in rolling that liquidity into the real economy, so that the ECB's loans to banks are converted into loans for companies and individuals.

The first movement of filling Lagarde's piggy bank had its logic. "We took that liquidity to -1% and the next day we entered it in the ECB's deposit facility at -0.5%," they explain from an entity's financial department. Spanish banks, and the European bank as a whole, did not hesitate to go to the last mega-auction of the ECB to the best of their ability. In other words, request the maximum liquidity possible according to your loan portfolio –excluding mortgages and loans to the public sector–, since a 1% bonus was guaranteed just for maintaining the financing balance. With the deposit rate at -0.5%, banks that have transferred that money to the ECB's account have posted a 0.5% return and will now use that liquidity. “The granting of credit is not immediate. Meanwhile, liquidity remains in the deposit facility. For banks, it is like a collection and payment account ”, indicate financial sources.

How does that money eventually become credit? That is the purpose of the ECB, and it is already achieving it. Once the Central Bank financing has been received, banks already have a first reason to grant loans. The liquidity cost, one of the items by which the price of a credit is fixed, is nil. More than null: it is a negative rate of -1%. That yes, to benefit from that type of interest they have to reach the financing objectives. From June 2020 to June 2021, the interest rate of all third generation TLTRO operations will be 50 basis points below the intervention rate, at 0%. And if the entities maintain the credits in net terms, the bonus will be double. The ECB will pay them 1%.

Banks have more margin on the other two big variables that set the price of a loan: credit risk and commercial margin. The severity of the crisis and the foreseeable rebound in defaults, as banks are already preparing with higher provisions for insolvencies, are helping to increase credit risk, a rise that the ECB is closely monitoring. "The credit risk is going to go up a lot," they warn from one entity. And although the ECB's measures have contributed to a very notable increase in financing, that increase will lose intensity in the coming months.

The June TLTRO auction would have been the great financing operation in the face of the crisis and demand is hardly expected for the next one, in September. Thus, Spanish banks have requested liquidity to the maximum of their capacity and for the large banks in the euro zone, those considered systemic, the increase in their balance sheet above certain thresholds tightens the demands on anti-crisis debt buffers, which may be an obstacle to asking for even more liquidity.

Purchases. The excess liquidity presented by European banks may well be a retaining wall in the face of a new rise in sovereign risk. In the event that the returns on sovereign debt, especially in the countries most sensitive to the current crisis, such as Italy or Spain, rise again, the banks have purchasing capacity. And they would have an asset at hand with which to scratch a few tenths of profitability.

Sovereign risk. Banks have already raised their debt portfolio in recent months, in part thanks to the ECB's liquidity. However, the sector does not lose sight of the lesson learned in the past crisis, when the combination of sovereign risk and bank risk was a serious threat to the euro zone.