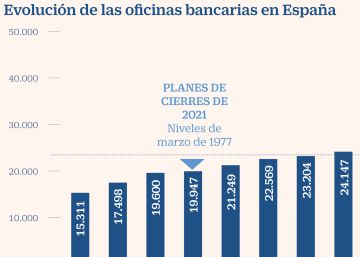 First it was the financial crisis of 2008, then digitization and Covid, and now the pressure introduced into the market by the merger of CaixaBank and Bankia. All this, together with the changes in consumer habits, is leading Spanish banks to undergo a new restructuring and revolution, which as a background has a drop in profitability due to negative interest rates, and now the lack of income from the pandemic.

For decades, Spanish banks were the country with the most bank branches and the most bars per inhabitant. Now, in almost both things we are reaching the European average levels.

At the moment, from the peak of the number of branches, in September 2008, the year in which the financial crisis broke out, until March 2020, latest data from the Bank of Spain, deposit institutions have closed 22,142 branches. In this way, the closures are close to the total number of offices, 23,565 as of March and far fewer already.

The bank, in fact, has intensified branch closures, given the need to reduce costs, and the turn of customers in the use of digital channels, with mobile in the lead.

The continuous messages from the European Central Bank, the Bank of Spain, the European Banking Authority (EBA) and experts are also exerting pressure on the sector that has decided to step on the accelerator in its new adjustment. Although some entities acknowledge that they are changing their closure plans based on the gaps that CaixaBank and Bankia leave after their merger.

During this year the office closure plans have accelerated. Thus, CaixaBank, regardless of the merger, decided a few months ago to advance its calendar for closing branches, to reach 3,600 branches by the end of this year. Despite its plans with Bankia, this objective is maintained, as confirmed by the entity. Thus, this exercise will close a total of 418 stores.

Bankia has already closed 145 branches. But the objective of the merger is to bolt at least another 1,500 offices between the two institutions. Sources familiar with the CaixaBank and Bankia plans maintain that the number of closures may increase, as there are strong duplications at least in the Balearic Islands, the Canary Islands, the Community of Valencia and Madrid, which may lead the CNMC to make finer numbers with more closures. This plan will be put on paper to be carried out in two years, but if it can be done before, it will be before, they point out from an investment bank.

Banco Sabadell has also decided to increase the number of closings planned for this year, to add 235 closures, a number that may be slightly lower in 2021. BBVA will close 160 stores this year, and if plans do not change, the figure will be similar next year . That’s without taking into account a merger, as the market speculates. Kutxabank will close 30.

Santander has also seen how the office is losing steam for the business. At the moment, from January to June, it only closed 18 branches, since the confinement paralyzed its plans, and it opted to temporarily close almost half of the network, which it has already opened to a large extent. But it has already provided the unions with a list with the closure from September to October of 150 more offices. This figure will be joined in the following months of the year by another batch of closings of 150 more stores, according to a union source, although this number has not been confirmed by the bank. There is also no number of closures it can address in 2021.

Ibercaja will dispense with 60 branches this year, and is considering a similar number for 2021. Abanca planned to close 80 branches, and a similar figure a year later, but is now modifying its plans after the merger of CaixaBank and Bankia to take advantage of the business they will leave behind. these two banks after their union. Bankinter and Banca March do not plan to reduce their size.

Unicaja will close 89 branches this year, while Liberbank will give 200 franchises, which the Bank of Spain computes as closing. All these closure plans are planned before the announcement of the merger of CaixaBank and Bankia, which will give rise to the first bank in Spain. In total, during this fiscal year and next year the disappearance of bank premises will approach 3,900 branches, if one takes into account that the closure plan for Santander in 2021 and other entities is missing.

Offices. Spain has been the country that has carried out a restructuring in the last 10 years. The differences in adjustments are very high, and in less than a decade Spain has gone from being the first country by number of branches to being the fourth, according to data from the ECB for 2019. At the end of that year, Spain had 24,004 branches, compared to to 35,837 in France, 26,620 in Germany or 24,350 in Poland.

Employees. But if Spain has made a strong adjustment in bank offices, the workforce seems to be taking the cake. There are 173,447 employees working in banking in Spain, a very distant number from the 399,374 employees in the financial sector in France, or the 578,578 workers in Germany. In Italy, the number of people who carry out their banking activity totals 280,219. But what is most striking is the high number of employees that Poland has, which with only 12,273 branches adds a workforce of 160,878 people. The same is true of the United Kingdom, which with only 7,649 offices employs 344,076 employees, according to data from the ECB with figures from 2019.