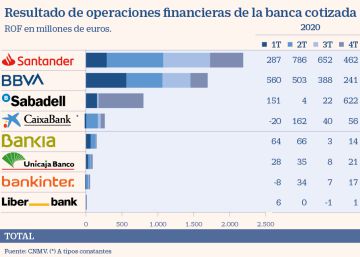 In a year in which Spanish banks have recorded high losses due to the millionaire provisions that have been recorded in the face of the possible future impact of Covid-19 on their loan portfolios, the sector has sought income channels to make up for the fall in interest and of traditional business. One of these alternatives is financial operations (ROF), in which short-term purchase and sale operations (trading) on ​​the stock market and fixed income are grouped, which last year rose by 36.2%, to 5,211.1 millions of euros.

This amount implies returning to levels not seen since 2017, after two years in which this item recorded a lower performance. However, if only the result derived from financial operations in Spain is included, profits fall to 2,258 million, 6% more than at the end of 2019.

The eight listed entities tried in the year of the pandemic to polish their trading portfolio, made up of both fixed income securities – bonds and obligations – and equities, options and futures, although not all did so in equal amounts nor did they achieve the same success.

Only three entities managed to increase ROF last year: Santander, BBVA and Sabadell. The entity chaired by Ana Botín increased the result from financial operations by 42.8%. An increase that without the exchange rate would be 56%. This is an item that represents 5% of the entity’s income and that was favored in 2020 due to the favorable impact of exchange rate hedges, portfolio sales and the management of market volatility, points out the entity in your accounts.

In the case of BBVA, the increase in results from financial operations was 22.3%, to 1,692 million euros.

More striking is the rise in the ROF of Banco Sabadell, of 534.92%, to 800 million euros. A high increase that the entity explains by the sale of bonds in the portfolio at amortized cost. The entity used this instrument essentially in the fourth quarter of the year, when it stood at 622 million, when selling debt to neutralize the impact of the restructuring plans and part of the sales of problem asset portfolios (NPA) for more than 1,200 million euros, which had a negative impact of 380 million. A restructuring that came after the breakdown of negotiations for an eventual merger with BBVA and its subsequent decision to continue alone and sell its British subsidiary TSB.

Gonzalo Sánchez, Gesconsult equity manager for Spain and Portugal, explains that the evolution of the debt market has played a leading role in the result obtained by the Spanish financial system as a whole via financial operations. After the strong rebound in yields during the months of March and April, a period marked by the outbreak of the crisis and confinement, the measures implemented by the central banks restored calm to the market. As returns fell, the price, which moves in reverse, rose, translating into gains for investors.

But as in everything, the good performance achieved in 2020 thanks to financial operations has its pros and cons. Although Sánchez considers that the result obtained has helped offset the losses recorded due to the heavy provisions made to face future defaults derived from the Covid-19 crisis, future profitability is reduced. Institutions now face the challenge of rebuilding their portfolios in a context in which the path of some assets such as debt is limited.

On the side of advantages, the expert points out that in a context of rebound in inflation, it is to be expected that the yields on debt will rise. The undoing of the debt portfolio has allowed the banks to achieve capital gains and shield themselves from the losses that will accompany rising yields. “Institutions will be able to take positions again when returns have rebounded to reasonable levels,” he explains.

Six millions. Of the five entities that obtained a worse result through financial operations, Liberbank led the cuts. The entity, in the process of merging with Unicaja, cut its ROF by 73%, which closed 2020 at 6 million, which comes mainly from fixed income sales, hedging results and the valuation adjustments of financial instruments accounted for at fair value. Bankia reduced it by 50.67% (147 million, far from the 433.68 achieved in 2018); Bankinter contracted it by 26%; CaixaBank, 20%, and Unicaja, 9%.