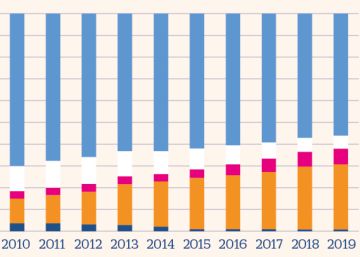 Yesterday the Bank of Spain published a report on the evolution of the investment fund market between 2008 and 2019. And its conclusions point to the need to carry out “a deep and continuous analysis”, to assess both “its resilience and that of the financial sector as a whole”.

The authors of the report recall that investment through this type of vehicle has not stopped growing during the last decade, but they show their concern “about the high degree of concentration, their interconnection with the banking sector and the greater assumption of risks during the last years ”.

First of all, they warn about size. The equity of companies and investment funds marketed in Spain reached 483,000 million euros in the third quarter of 2019, which is equivalent to 39% of GDP and 11% of total financial assets managed by the financial sector in Spain. Within the euro zone, Spain was in seventh place, with just 2% of the total.

Furthermore, the experts from the Bank of Spain recall that the investment fund industry and the banking sector “are closely linked through different channels.” Thus, about 82% of the assets of investment funds registered in Spain have been managed by subsidiary managers of Spanish banks.

The existence of this link can influence the activity and performance of the banking sector. Although, on the one hand, banks compete with substitute products for collective investment vehicles, such as deposits, on the other they benefit from the expansion of this industry through the marketing commissions they receive, and indirectly also through other commissions (such as management and custody).

New model. With the entry into force of the latest European financial markets regulations (known as Mifid 2), entities changed their way of relating to clients interested in investment funds. More and more discretionary portfolio management contracts are being used, whereby the person delegates to the bank the power to buy and sell funds and securities on their behalf, under certain parameters. According to the latest data distributed yesterday by Inverco, this model already reaches a volume of 78,000 million euros, as of June 2020. The bank, for its part, is committed to always looking for the funds with the most adjusted commissions, since charges the customer an explicit commission. The funds they seek for the client are not usually from the bank manager, which reduces conflicts of interest.

On the other hand, this link means that the dynamics of the banking sector have a very evident influence on the fund market. Thus, for example, the consolidation of the sector in recent years has played a key role in the increased concentration of the fund industry. While waiting for the merger of CaixaBank and Bankia to take place, the new financial giant would control about 30% of the long-term investment business (including funds, plans and life-savings insurance).

Another interconnection channel between banks and funds is established through the latter’s holdings of assets issued by the former. This relationship “is particularly relevant in the case of bank subsidiary managers”, warns the Bank of Spain report.

Thus, in June 2019, the shares of Spanish banks held by investment funds with a vocation to invest in equities managed by banking groups represented 9% of the assets of these funds, compared to 4.7% of the assets of the rest of the investment funds with the same vocation registered in Spain. Which may suggest a certain conflict of interest on the part of the managers. Furthermore, the funds also invest in bonds and cédulas issued by banks, as well as in deposits and other more liquid instruments.