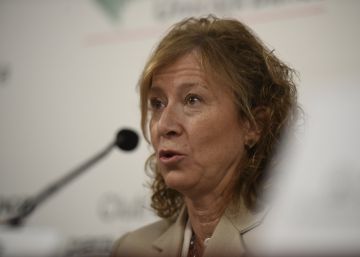 The deputy governor of the Bank of Spain, Slim Margarita, admits that since 2009 “there has been a reduction of more than 30% in the number of entities”. However, he believes that “the environment is extremely competitive” and that “the national mergers map may not yet be closed particularly when the reduction in structure costs is one of the few levers available to improve the income statement,” he said. in an informative breakfast on the European banking union organized by the Dialogues Club for Democracy and Unicaja.

In question time, he was asked about whether this decrease in entities could reduce banking competition to customers. Delgado, far from supporting this thesis, said that in Spain “There is a worrying competition that causes the margins to be super narrow.”

The number two of the Bank of Spain was also asked if the merger of BBVA with Bankia was in the Government’s plans. His response was that such an operation “must come from the entities. It is not decided by the authorities and they must present a viable and credible plan for it to be authorized. I am honestly a bit surprised, I think there is nothing on the table.” . He later added that “a merger cannot be made at any price”, but “has to generate synergies”, so a “viable, coherent and credible” business plan must be presented.

As for the ‘Villarejo case’ and its relationship with Francisco González’s BBVA, Delgado has preferred to avoid making any comments, hiding in the summary secret, to which he has asked for respect.

No opinion on commission increases

On the other hand, he has assured that the Bank of Spain does not think and is neutral about the commercial policies of financial institutions, in relation to the increase in commissions that the sector is developing, as long as the solvency and sustainability of the system is maintained. “You should look for levers to be profitable in the future,” he added. However, he pointed out that the Bank of Spain has not yet conducted any empirical study that shows an increase in bank fees.

Finally, Delgado, who has affirmed that the supervisory body always evaluates the policies that the Executive implements for its technical role, considers that any tax increase can affect the bank as well as another economic agent. “We will have to act with judgment and responsibility,” he warned.

Regarding the possibility of imposing a tax on financial transactions, known as the ‘Tobin rate’, the deputy governor has said that “it can obviously affect customers because it affects benefits and sustainability.”

Delgado also said that El Corte Inglés has not requested authorization to create its own bank, although, as noted, it would be in its right and could do so in the future. “It is a financial credit institution, so far what it proposes is to increase the list of activities, but has not applied for a banking license, has not sent any, I do not say that it does not request it in the future, it would be in its right,” he said Thin.

In this way he spoke about the plans of the distribution giant, immersed in the search for new formulas for financial services and business expansion by Santander, its partner in the financial division.