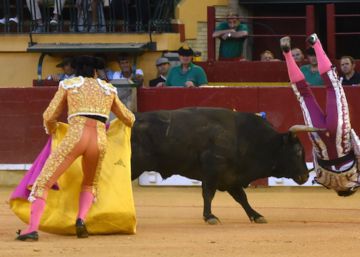 The state of the junior Mariano de la Viña, wounded yesterday Sunday in the bullring of Zaragoza, remains very serious, according to the medical part issued on Monday by Dr. Val-Carreres, chief surgeon of the infirmary. De la Viña suffers two wounds and head trauma and remains admitted to the QuirónSalud hospital in the capital city of Maña.

The official part indicates that the banderillero Mariano de la Viña entered the infirmary with the following injuries: two wounds due to a bull horn and head trauma. A wound at the level of the right Scarpa triangle with an entry hole of 12 cm and two trajectories, an ascending 27 cm that plucks the superficial femoral artery and breaks the internal iliac artery in its distal portion, with rupture of the median abductor sartorius muscles penetrating retroperitoneal space.

A second wound at the level of the left gluteal region with an entrance hole of 8 centimeters and a forward path of 22 centimeters, which penetrates through the sciatic recess and reaches the space between the rectum and bladder after starting the left internal iliac artery at its origin .

"Mariano is still very serious," he said Mundotoro Dr. Val-Carreres, who added that "fortunately, there is no sign of active bleeding in these early hours."

On the evolution in the ICU, the doctor has stated that the bullfighter “has a very good perfusion in the right leg where he suffers the lesion of the femoral artery, and that is the most important that leads irrigation to the lower limb, and in that sense, the wounds have a good surgical state. "

The chief surgeon of the Zaragoza square has specified that the bullfighter entered the infirmary in a cataclysmic state. The whole team started working very quickly and we fulfilled the role we have assigned and that made us save the first pothole. Now, we can say that, at least, the patient is in the ICU, and that we have an injured person.

Mariano de la Viña, banderillero of the Enrique Ponce gang, was hit by the fourth bull in the afternoon of the last celebration of the Pilar de Zaragoza fair. Placed the animal in the third line, he hit De la Viña to the second top and left him unconscious in the sand. Then, he picked it up and cornered with viciousness until the assists could help the bullfighter and remove the bull.

Mariano de la Viña was transferred to the infirmary and left a pool of blood in the sand, proof of the extreme gravity of the catch. After an emergency intervention in the square, he was transferred to a hospital, where he was intervened again until the wee hours of the morning.