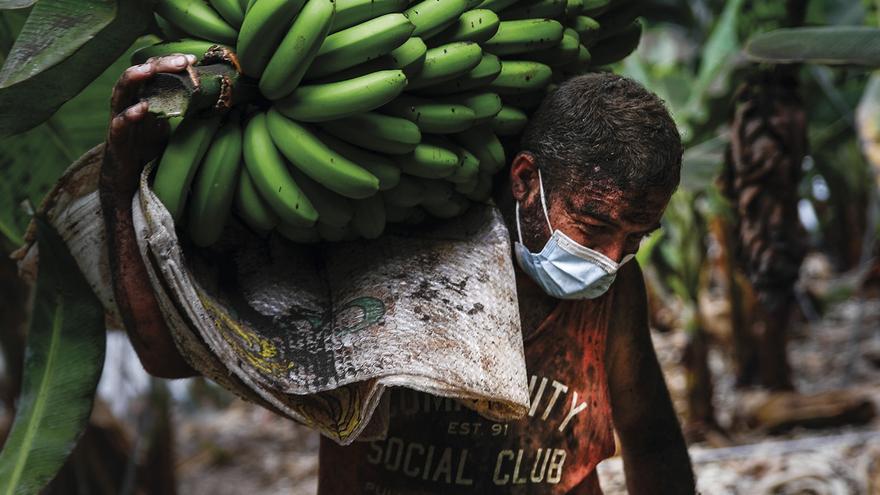 The presence of chemical elements emitted by the volcano in the bananas collected during the Cumbre Vieja eruption on La Palma It does not pose a danger to human consumption, since in no case would 5% of the tolerable daily intake of any of them be exceeded.

This is the main conclusion of a study published in the scientific journal "Chemosfere" by researchers from the Institute of Biomedical and Health Research of the University of Las Palmas de Gran Canaria, of Instituto Tecnológico de Canarias and the Spanish Center for Biomedical Research in Physiopathology of Obesity and Nutrition.

Research has shown that the deposition of ash and nanoparticles of magmatic material on the surface of bananas affects the interior of the fruit much less than the skin, which absorbs a greater amount of elements that in certain concentrations could be toxic.

This allows much of the contamination to disappear with the washing that takes place in the processing plants, with reductions of 74% in 37 of the 50 items analyzed.

Even after washing, the researchers highlight, there is a significant increase in the concentration of some elements of clear magmatic origin compared to bananas harvested under normal circumstances, such as iron, aluminum, titanium, vanadium, barium, or lead, most rare earth elements, molybdenum, and cobalt.

In all cases, the main culprit for the high concentration of the elements analyzed is ash, rich in titanium, aluminum and iron, for example, although the composition may vary depending on the geographical area.

"There are some very striking cases such as titanium, an element that is not very abundant in the fruit, but which has very high concentrations in unwashed bananas and which after washing was reduced by 96.8%", the study details.

Equally striking were the cases of aluminum and iron, both in very high concentrations in unwashed bananas and that after washing they were reduced by 88% and 83% respectively.

In the case of previously washed bananas, significant differences in zinc and selenium are only found in the skins, both with higher levels in the skin of bananas affected by the ash than in those harvested the week before the eruption.

Significant differences were also found in the pulp of bananas with respect to manganese and cobalt, which were higher in bananas after the volcanic eruption.

In the case of Canarian consumers, who can consume up to 420 grams a day of this fruit, the bananas under the influence of the volcano provide them with almost 15% of the nutritional requirements of cobalt, although in this case the difference with the bananas pre-eruption is minimal.

"Even in the case of iron, and despite the high levels detected, the nutritional contribution would not exceed 1% of the daily requirements in intensive banana consumers", summarizes the study.

Exposure in the worst case, which would be exposure to vanadium, would only represent 4.5% recommended or tolerable daily consumption.

In the case of cadmium, the analyzed samples showed "extremely low" levels of this element, which only detected a small increase in the skins of bananas in some area, but it was not transferred to the interior of the fruit, thus not affecting the recommended or tolerable daily intake for a human being. EFE

It is estimated that the pyroclastic material emitted by the volcano has affected 3,500 hectares, of which 51 percent, about 1,800, are banana plantations, with an estimated annual production of about 100 million kilos of bananas.