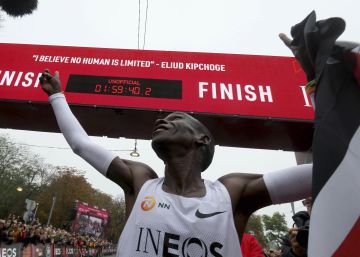 Eliud Kipchoge triumphs in the city of Freud, a Kenyan farmer with short answers and clear ideas that, surely, would never have lay down on his couch and that, at the press conference after his trip to the moon of the marathon, asks journalists loudly: how old are you over 65? They raise the arm three, four, a minimum drop among the tens present. “You,” he says, “are the only ones here who were alive when Bannister went down four minutes in the mile, and yet we all know who Bannister was. And I also hope that in 65 years everyone will talk about me the same, because I have also entered history. ”

Bannister reached the first in 1954 Everest of athletics, and, despite the aesthetic differences -Bannister, a neurologist, sharpened the nails of his shoes on the lathe of the London laboratory where he was investigating, hung the robe, ate a sandwich and took a train in Paddington to Oxford , where his hares and the clue were waiting for him; Kipchoge has been the cornerstone of an expensive project-, the foundation was the same: an athlete and a unique goal in a special race, a time trial. Bannister was, along with the Australian John Landy and the American Wes Santee, one of the three post-war athletes who on three different continents competed to be the first to overcome a barrier that was believed impossible. They did as Everest Hillary had promoted a year earlier, to find out what was there.

With the same curiosity of explorer Kipchoge undertook the path of the two hours of the marathon, a distance that, despite appearances, never ran in the Olympic Games of antiquity and that lives in the 21st century a unique apogee. To give a Greek touch to the 1896 Athens Games, Baron Pierre de Coubertin instituted a cross-country race that reminded of the soldier Philippi, the herald who ran to Athens, about 40 kilometers away, to announce the victory of the Greek army in Marathon, in 490 BC. In the London Games of 1908, the standard distance of 42,195 kilometers (the 26 miles and 218 yards from the Windsor Palace, from where it started, until the arrival in front of the royal box at the Olympic stadium) was set, and, at the Once professional marathons multiplied throughout a world (Boston, London) fascinated by the distance that tested the capacity for human resistance, the fight against time began.

In 110 years of official records, those recognized by the international athletic federation, from 2h 55m 18s of Johnny Hayes in London, to 2h 1m 39s of Kipchoge in 2018, the marathon world record has been improved by almost 54 minutes. The record dropped to large bites at the beginning (it only took 17 years to get down from 2h 30m), coinciding with the first popularization of the test. He needed 38 years to get off from 2h 15m (2h 14m 28s, Leonard Edelen, in 1963) and only four more, Derek Clayton, in 1967, to overcome the 2h 10m barrier. And, although in that decade, thanks to the figure of the Ethiopian Abebe Bikila, double Olympic champion in 1960 and 1964, who gave his mystical aura to the race, the great boom from the distance in the United States and Western Europe, and lit the flame in Africa, the marathon record entered its great plateau. To reduce the record five minutes, 36 more years were required (2003, Paul Tergat, 2h 4m 55s) and in the last 15 years it has only dropped three minutes, despite all the improvements in training, preparation, nutrition and shoes.

According to the rules of the IAAF, the international athletic association, which prohibit hares that are relieved, the two-hour border is still far away. As he has been able to verify the world, Kipchoge has crossed it. He has run in less than two hours and has not perished in the attempt. The culmination has ended Bannister moment of the marathon. A victory of the spirit, according to the hare Bernard Lagat. “The spirit is that there are no barriers. It is what we have demonstrated, the spirit of Roger Bannister. ” And Henrik, the eldest of the Ingebrigtsen brothers, rivets: “We had long expected this Bannister moment of the marathon. This will be the first of many marathons below two hours. Eliud has simply shown that it is possible. ”

LaLiga Santander 2019 – 20: Athletic – Celta: schedule and where to watch the Liga match on TV today

Badminton. Carolina Marín stays in Indonesia one step away from the dream comeback