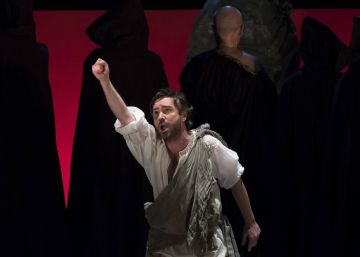 “I am the Music, and with sweet accents I know how to appease any tormented heart and pray with noble anger, pray with love, I can inflame the most frigid souls. With golden lyre I sometimes ground the mortal ears to delight singing; and in this way I further encourage souls to the sound harmony of the lyre of heaven ”: this is how the allegorical character of La Música expresses himself at the beginning of Orpheus, the "Favors in music" from Claudio Monteverdi with which symbolically begins the history of the opera. Any musical recommendation to accompany our forced confinement these days should necessarily start here.

The unusual images of our desert cities and towns have a perfect musical correlate in the spiritual concert Wie liegt die Stadt so wüste (How deserted is the city), a spiritual concert composed by Matthias Weckmann in 1663, whose text taken from the Jeremiah's Lamentations, although referring to Jerusalem, it served to graphically depict the ravages caused in that year by a plague epidemic in Hamburg.

Whoever longs for outings in the countryside and contact with nature will find solace in Symphony "Pastoral" from Beethoven or in An Alpine Symphony from Richard Strauss, which graphically describes with sounds the ascent to a mountainous summit, with all its vicissitudes. And the long hours recovered for leisure will allow activities almost always forgotten: contemplating the moon, for example, companion and confidante of romantic poets and composers. A Goethe poem starring the inevitable Wanderer who wanders alone and aimlessly with the moon as the only company inspired one of the best songs of Franz Schubert.

Lost the usual references that differentiated Monday from Thursday, or Wednesday from Sunday, now that every day inevitably resemble each other, now that the lives of many have become the same theme with the introduction of small but welcome variations, Nothing better than spending some time listening to one of the most prolific and longest-running genres in Western musical history. And much better to opt for very little known examples, such as Aria Variata Johann Christoph Bach, great-uncle of Johann sebastian, who called him a "deep composer"; waves Variations in F minor, by Joseph Haydn, a rare gem; waves Variations on a Schumann theme that the young man Johannes Brahms he wrote as a tribute to his friend and mentor.

A gender-specific variant of the variations are the chaconas or passacaglias, in which a bass remains unchanged while the upper voices continue to transform. Here, too, the possibilities are almost endless, but let's stick with four very different examples: Jesu meines Lebens Leben, Dieterich Buxtehude; the last of those known as Sonatas of the Rosary, by Heinrich Ignaz Franz von Biber, a musical representation of the Guardian Angel, to whom many will be trusting these days; the last move of the Fourth symphony by Brahms, inspired by the final chorus of the Cantata BWV 150 Bach; and the Chaconne chromatique which closes the Sonata for solo viola from György Ligeti. Listening to them, the days will no longer seem the same.

The running of the bulls also invites the discovery of music whose existence we have ignored until now. Three proposals alone: ​​the motet For the grant senz d’Adriane, a praise of the mythological character of Ariadne written by an Italian Trecento composer, Filippotto da Caserta; the first of the Gesänge der Frühe, one of the piano miracles of the last and already alienated Robert Schumann; and the conclusive movement of the Notturn by the Swiss composer Othmar Schoeck, who created one of the most exciting music of the 20th century to ease the pain of heartbreak from extraordinary verses by his compatriot Gottfried Keller.

Whoever longs for the crowds can substitute them for the crowd of instrumentalists and singers that the Eighth Symphony by Mahler, which closes with a Mystical Choir that puts music at the end of the Splendor de Goethe: “Everything transitory / is just a simile; / here the insufficient / becomes evidence; / here the inexpressible / is realized; the Eternal Feminine / pushes us to the top ”. Those who choose, on the contrary, to withdraw and take refuge in solitude and music, will feel reflected in the last of the Rückert-Lieder from own Gustav Mahler. And for those who prefer to put themselves in the hands of Providence, or for those who despair, Bach is a reference that never disappoints: "I wait for the Lord, my soul waits, and I wait for his word", is sung in the chorus of his youth Cantata BWV 131. Also the divinity, not necessarily the Christian, is the recipient of the song of thanks that, recovered from a very serious illness, Beethoven composed as a slow movement of his Quartet op. 132, an obligatory music in times of illness, convalescence and healing.

In the year of its anniversary, when the great Bundeskunsthalle exhibition in Bonn has had to close its doors and so many concerts dedicated to its music have been suspended, Beethoven has to have at least a double presence on this list. Fraternity, so necessary these days, appears exalted not only in the last movement of the Ninth Symphony, but also at the end of his opera Fidelio: "The brother looks for his brothers and, if he can help him, he does it with pleasure." This same ideal of union encourages Variations on "The united people will never be defeated", from the American Frederic Rzewski, who has endorsed as never before a born fighter like the pianist Igor Levit.

“But –paraphrasing Forges– let's not forget Italy”, and what better way to remember it than with the music that Hugo Wolf imagined for the poem that Goethe made Mignon sing in Wilhelm Meister's years of learning: "Do you know the land where the lemon tree flourishes?" We know it and we cannot forget it. And when all this is over, there, here and everywhere, we will thank with the monodic sobriety of the sequences and antiphons of Hildegard von Bingen or with the polyphonic effervescence, bathed in Italian light, of the end of the Dixit Dominus from Georg Friedrich Händel.