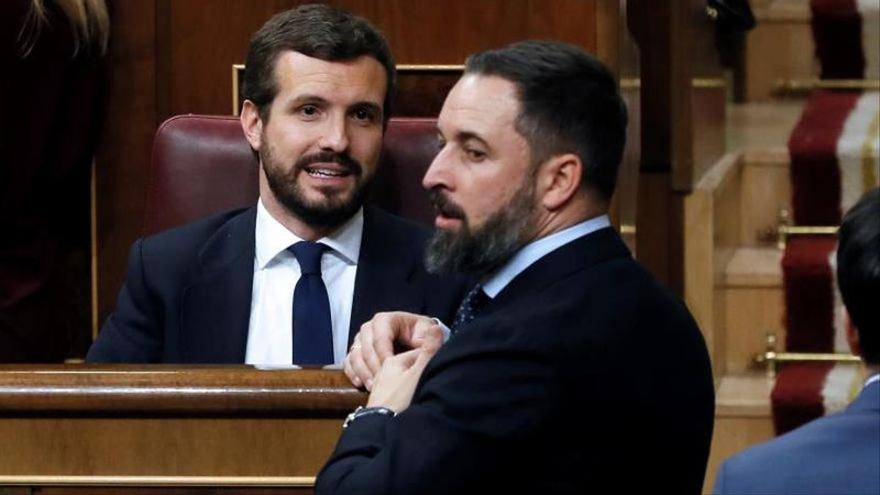 “Break up with Bildu.” The phrase heads the last argument made by the PP leadership to distribute between positions and spokespersons and help them build their appearances before the media. The text, with brief slogans to repeat in public statements, was sent this Thursday, October 21. The party led by Pablo Casado has demanded countless times from the coalition government not to rely on the parties that allowed the inauguration of Pedro Sánchez or the approval of the General Budgets of 2021, and that they are emerging as those that will allow it to obtain the 2022. But the pressure for the PSOE to break with EH Bildu has multiplied on the tenth anniversary of the definitive cessation of violence by ETA, which has coincided with the Declaration on October 18, in which the left nationalist he has apologies to the victims of Basque independence terrorism.

All, while maintaining its autonomous governments thanks to Vox, whose leader has defended, among other things, that the Franco dictatorship was better than the governments of Zapatero, Rajoy or the current one. And that you bet on reverse integration into the European Union, something that clashes with the ideology that Casado claims to defend when he goes to community institutions, as he did last Thursday. Before meeting with the European PP, where Angela Merkel participated for the last time, he said that it cannot be agreed “neither with secessionists who deny European Unity, nor with radicals who defend dictatorships.”

Despite the fact that ETA has not been attentive in Spain for 10 years, Casado is replicating the failed strategy that Mariano Rajoy already followed in his first legislature in opposition to José Luis Rodríguez Zapatero. If in 2005 the then leader of the PP accused the president of “betraying the dead”, last Wednesday it was his successor at the head of the party who pointed out Sánchez for having “left behind the victims of terrorism”. “You cannot agree and whitewash those who justify the murder of 800 innocents,” said Casado, in a fierce control session in which the PSOE secretary general replied: “The right does not feel this [el fin de ETA] like a victory and always conveys a bitter vision of one of the great achievements of the Spanish democracy as it is the end for always of the violence “.

The strategy has even reached the recent renewals of the constitutional bodies. The PP has promoted as number two from the Ombudsman to Teresa Jiménez-Becerril, sister of a murdered by ETA. The secretary general of the party, Teodoro García Egea, acknowledged this Friday that with the appointment the PP has wanted to send “a very clear message of support to the victims of terrorism in a week in which we have seen Otegi blackmail Sánchez and the Government” , in reference to a speech by the EH Bildu coordinator with militants in Eibar where he said that if it was necessary to support the Budget to advance the release of ETA prisoners, it should be done.

Married reiterated this Thursday in Brussels his thesis relying precisely on that phrase by Otegi. “Moderation, Europeanism and social democracy is not making a pact with politicians who justify the murder of 850 innocent people,” he said before entering a meeting of the European PP. And he added: “Neither with secessionists who deny European Unity, nor with radicals who defend dictatorships.”

Otegi, in the closed-door intervention that was leaked to The mail, He spoke of trying to guarantee six years of progressive government in Spain to advance in the policies of reintegration and rapprochement that stopped during the years of absolute majority of the PP. And he warned that the alternative to EH Bildu and other pro-independence forces supporting the Executive of the PSOE and United We Can was one of the PP with Vox. Something that some surveys already contemplate. And according to those that they denied it for months.

And Casado has not denied that option. In fact, at the recent National Convention, the PP leader gave a new turn to his strategy and returned to 2018, when he won the extraordinary congress despite losing the first round of the primaries against Soraya Sáenz de Santamaría. If in 2020 Casado tried to redirect his message and occupy the political center in the face of the Vox offensive, a motion of censure against Sánchez through, a year later he has launched for the voter of the far-right party. AND without renouncing the support of Santiago Abascal, whom he now calls “Santi” again in interviews, when in October 2020 he snapped from the platform of Congress: “We have come this far.”

But the reality is stubborn and the PP needs Vox to carry out the budgets in multiple autonomous communities and municipalities, although its leaders are already exploring other options. In Madrid, Isabel Díaz Ayuso has not even surveyed that other arithmetic and is counting on Rocío Monasterio’s people to approve her first accounts since she became President, back in 2019. At the City Council of the capital, José Luis Martínez Almeida trusts that The disunity of Más Madrid gives its accounts a chance, which Vox says it denies. And in Andalusia, Juan Manuel Moreno seeks an agreement with the PSOE that separates him from the extreme right.

And what do they say from Vox? That after the next electoral cycle the support of right-wing governments from the outside is over and that they will propose sitting in the armchairs of the government boards, the regional councils … and the Council of Ministers. It was recently notified by Macarena Olona, ​​who is emerging as a candidate in Andalusia.

Thus, if Casado and the rest of the PP leaders do not achieve an absolute majority, they will find themselves in the position of, at least, agreeing on a program with the far-right of Abascal, who has left said in the gallery of Congress that the governments of the Franco’s dictatorship were “better” than the current one.

“He presides over the worst government in 80 years”, the Vox leader snapped at the President of the Government in a control session in 2020.

The accounts are clear and the leader of Vox, far from backing down, reaffirmed that approach in successive parliamentary speeches. That same during the motion of censure against Sánchez that he did not manage to add a single deputy from outside his group.

Vox has not condemned Franco either. In fact, his number two, Javier Ortega Smith, objected to doing so and argued that “in every fact there are lights and shadows”. In Andalucia, have questioned the money that is used to search and reopen the graves where tens of thousands of Spaniards murdered during the dictatorship lie. And they have rejected the exhumation of Franco “whether legal or not”, in the mouth of its president.

Casado’s phrase before meeting with his European colleagues (“neither with secessionists who deny European Unity, nor with radicals who defend dictatorships”) is in fact applied to the sister parties or allies of Vox in other countries. The case of lander Thuringian German is paradigmatic. There, merkel forced the elected head of government to resign and call new elections, after agreeing with the extreme right of Alternative for Germany. The leftist Die Linke took control of the lander.

Germany has been an example where the right wing has refused to agree with the far right, even if that meant losing control of powerful centers of power. The same has happened, for example, in France. The National Front of Jean-Marie Lepen, inherited by his daughter Marine and today renamed Agrupación Nacional, has seen how a sanitary cordon was established around it that has prevented it from being seen as a ruling party by a large part of the electorate. The two times that the presidential elections have reached the second round, the French social majority has opted for the other candidate, almost regardless of who he was.

The policy of not agreeing with the extreme right has even reached the European Parliament, where the EPP began the process of expelling the supporters of the Hungarian Prime Minister, Viktor Orbán, from the group. for their extremist approaches. An Orban with which Vox maintains very close relations, like the rest of the countries of the so-called Visegrad axis (Poland, Slovakia, Czech Republic and Hungary). After Hungary, Poland has become in the new EU headache, by rejecting its Constitutional Court that community treaties are of direct application in the country.

Vox has strengthened its relationship with the leaders of those countries, and Abascal usually exchanges public messages with Le Pen to congratulate himself on their respective electoral results. Despite his own words, Casado does not deny his support.