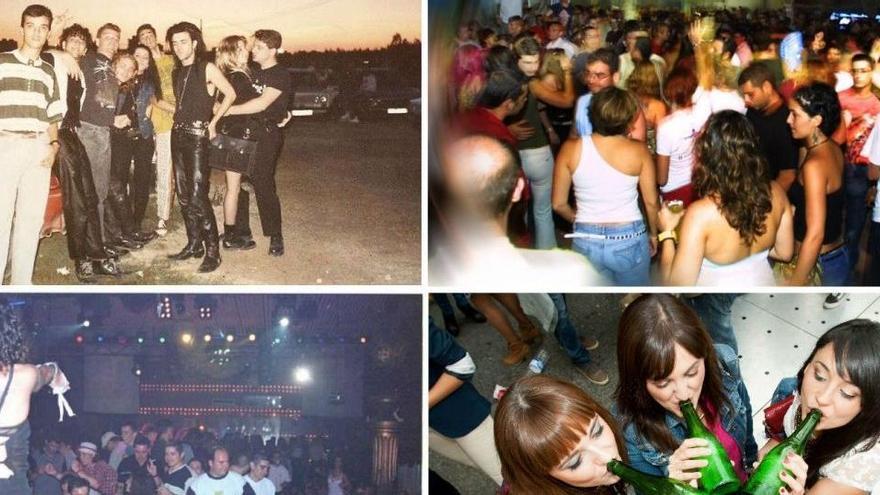 It is always difficult to establish the birth of a current musical, but Almost 40 years ago – yes, 40 years! – that the Valencian Community finally launched itself into the arms of disco hedonism, creating his own style that rivaled the best dance halls in Ibiza or Barcelona, ​​and that in less than a decade was turned into something else, very different and forever associated with the “bakalao route”, the scourge that ended up marking forever the Valencian nightlife.

According to urban legend, the name “bakalao” derives from the expression “this is good bakalao” in reference to a musical theme “destroy”. And the route was nothing more than a circuit of discotheques that was linking schedules, which allowed, in many cases drugs through, to spend the entire weekend (sometimes from Thursday to Monday) partying continuously. Initially on the coastal road of El Saler, in Valencia, but the phenomenon also spread to Alicante, where years later the name “the artichoke route” was coined. Nightclubs such as APTCE (San Vicente), Terapia (El Rebolledo) Sakkara (Guardamar del Segura), KKO and Hook (Torrevieja) Metro (Bigastro), Watts -which would later become Revival- (Los Montesinos), Central Rock (Almoradí) , Skandalo (Callosa d’En Sarrià) and El Límite (Santomera, Murcia), among others, were the main “Bakalaeros” temples of Alicante.

The closures of some of these sanctuaries of electronic music, such as Revival, added to the Puzzle closure in Valencia in October 2011, have been erasing practically all traces of it. Only some survivors, such as Central Rock, popularly called “la Céntral”, and the “remember” parties, which in recent times have brought together in different clubs those nostalgic for the “bakala” music of the 90s, keep the memory alive.

The then protagonists of that youth movement are today parents who attend new forms of nightlife in their children. At the risk of falling into generalization, the truth is that this new generation has raised the bottle in the street or in the evening in front of their parents’ taste for discos.

But before the Bakalao route ended up self-engulfing at the pace set by the chronicles of events, there was something very different. A way of understanding the night that turned the Valencian Community into a modern center of attraction that rivaled the Madrid “movida”, and that in fact saw some of its protagonists pass through its rooms, such as Almodóvar or Alaska.

The documentary “72 h … And Valencia was the city”, launched many years ago, recovered the essence of those eighties, from the hand of two people who experienced it first-hand, Óscar Montón and Juan Carlos García: “For about a decade we had a production company that recorded every week in the reference clubs, in Spook Factory, Barraca, Chocolate … There came a time when we thought that all that material was suitable for a documentary, joining it with statements from those who lived through that “.

Enrique Bunbury, Loquillo or Rafa Sánchez They also gave their opinion on those years, which they consider unrepeatable, and which served “for people to realize that something was happening in Valencia that was not happening anywhere else in Spain.” Bunbury recognizes that it was necessary to travel to Valencia to see some groups that did not perform elsewhere, and that nevertheless there congregated hundreds of followers. Decades later, it is a phenomenon that is still alive in the hands of The Cult, The Mission, Alien Sex Fiend… names forever associated with the Valencian “movida”, not as popular as the one from Madrid, but which undoubtedly knew how to take full advantage of its almost underground character.

Coinciding with the release of that DVD, an accompanying disc was also released, which recovered the songs of that phenomenon. In “72 hours. The route to Valencia”, Nitzer Ebb, Front 242 and Anne Clark coexist with Megabeat and Chimo Bayo. The eighties and the nineties. The time of growth and splendor of a phenomenon that will be forever associated with tremendous reports, but that gave much of itself before it became a mass consumer product.

But what did it consist of? What was the key to success? It is impossible to understand that boom without being in the Valencia of the early eighties. In a city that was struggling to get rid of the dark years of the dictatorship, and that had not yet reached the level of cosmopolitanism of Barcelona or Madrid, but that had its own plan. In those years, the aesthetic and social renewal not only came to dresses and hairstyles, but also to the very concept of discos.

As the Valencian journalist claimed Joan M. Oleaque in his essay “En èxtasi”, the most complete study of the phenomenon of the “route” carried out to date, “in this country, dancing had never been a man’s thing. Their place was generally the bar, watching women dance. But in Valencia all that changed” . From the traditional nightclubs of the late seventies, which were limited to playing hits of the moment, a new concept was passed, close to what is now known as “club”. An exclusive environment in which all urban tribes fit, from posh to rockers, and in which they all ended up coming together for the same philosophy.

There is no doubt that music was the spark that ignited everything. Since 1980 Carlos Simó was in charge of the Barraca booth, applying the maxim that would make the “party” great: mixing danceable rhythms with others that were not danceable at all. In 1984 Spook Factory joined the idea, led by Fran Lenaers, and in parallel, Chocolate, with Javi Gitano on the decks. The “holy trinity” of Valencian nightclubs remained, each with its own style, but with a common philosophy, summarized very briefly by the Auserón brothers, from Radio Futura: “What happened in Valencia did not happen anywhere else Mixing the dance songs with the saddest songs from The Cure was quite audacious. ” Barraca, in addition, broke the mold when it began to open on Sundays at 6 in the morning, something that then did not happen anywhere else.

From the hand of Lenaers another innovation arrived, such as the incorporation of the mixing console and the two dishes in the booths, with the beginning of the technique of mixing themes.

All that risky bet soon attracted the most restless Valencians, already musicians, artists, designers … All united around a unique cocktail, in which apparently irreconcilable groups could fit: from The Human League to Ramones; from Tom Waits to The Sisters of Mercy, and thus continuously, engaging an increasingly numerous and involved public, who found their religion in the “Valencia sound”, and in mescaline, the drug of fashion, the vehicle with which to let yourself go to the limit.

In the heat of all the phenomenon, a multitude of music producers began to emerge in the Valencian Community, especially in Valencia, a city that came to host her alone more record labels than the rest of the country.

Eternal nights, lasting 72 hours, like the ones that give the documentary its title, and that they gave rise to a legend that made, over the years, Valencia be compared to Manchester, for its ability to create its own sound starting from nothing. As Fran Lenaers, one of the “fathers” of the phenomenon, recently recalled, “the public was the main driving force behind the party, and the music was much more varied than what is currently heard in nightclubs. Now you listen to songs made by producers. directly to dance, but then it was not necessarily like that. Music was played that was initially not designed to dance, but the public ended up adapting to it “.

The formula worked for years, but it also carried its own self-destruction. Circumstances forced DJs to be more and more creative, to continue delving into a concept of mixes that in many cases no longer gave more than themselves. The public expected to be constantly surprised, and also began to flock and turn the discos into something more than a little shared secret. As Montón and García remember, “there was a moment when the party moved to the parking lot. In the discos there were no longer 600 people, but thousands, and in addition discos were beginning to appear everywhere. And a new generation arrived, with other tastes and other drugs. ”

And the story is over. At the beginning of the nineties, few were the rooms that kept the essence, and nevertheless the number of businesses had grown like the foam. It was the time of Spiral, Puzzle, Heaven, Zone, Local Limit, NOD or ACTV (whose full name was Cultural Activities of Termas de Victoria), and of course the classics, Barraca, Spook and Chocolate, which kept their sessions, but little by little they were moving towards a harder style.

Chimo Bayo triumphed around the world with “That’s the way I like it”, collecting the fruits of many years playing in Arsenal, another of the places of pilgrimage. Records were released and people came en masse from all over Spain to buy t-shirts, caps, stickers …

But he was not the only one to savor success. Other groups, like Double Vision, have also crossed our borders.

Virtually all young Valencians knew what was being cooked a few kilometers away from their homes, and yet the essence of the party had long since been lost forever.

The arrival of a new generation of youth and disc jockeys ended up gobbling up the style forged in the eighties. The Lenaers, Simó and company were leaving the place to the new icons of the party: Chimo Bayo himself, Kike Jaén or José Conca changed, little by little, the way of understanding a session. The rhythms were hardening, combining with the calls “cantaditas” or “pastelitos” with a stage in which many producers were already dedicated exclusively to creating hits for the dance floors.

The music thing “so as not to dance” is over. “The plan was to start the session in a brutal way from the beginning, and not make the rock think too much,” acknowledges one of the DJs of that time when, as always happens, other cities had learned to take advantage of the phenomenon. In the nineties, the machine went to live in Barcelona, ​​and the Community lost its hegemony forever, saying goodbye to its only era of splendor.

The numerous traffic accidents After the inexhaustible party sessions, with the consequent fatalities, they naturally drew media attention to this phenomenon already in the process of degeneration.

The “bakalao route”, finally, has been etched in the collective memory with the image of young people rampant through drugs and alcohol, completely forgetting what it meant in its beginnings, as this Canal Plus documentary broadcast in 1993 and presented by a beardless Carles Francino shows.