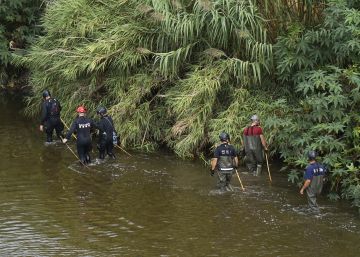 "They were here. We don't hear a scream, a sigh, or a noise. When they left they left the room clean, ”explains the receptionist at the Cool & Chic hostel in L'Hospitalet de Llobregat (Barcelona). In a room of this pension, last Monday she gave birth to a 16-year-old teenager with the father of the newborn, the same age as the mother.

The couple, during all these months, had managed to hide the pregnancy. Hours after giving birth - it was Tuesday, September 24 - the creature's father hid the baby in a suitcase and threw him into the Besòs River, eleven kilometers away. Yesterday the Mossos found the body after more than 72 hours of searching. The central juvenile unit of the Catalan police and the Prosecutor's Office ensure that the couple's identity is preserved.

The young man entered a juvenile center on Wednesday after confessing the crime. His girlfriend remains free although he is being investigated by the Mossos.

The mayor of the Mossos d'Esquadra, Montserrat Estruch, reported yesterday that the body of the child was among some reeds "and could not be seen." "We had been there many times," said the mayor, who said that without the canine unit it would not have been possible to find the body.
Estruch thanked that various police stations of the Catalan autonomous police received calls from citizens offering to volunteer to collaborate in the search for the baby.

The corpse of the creature was located yesterday afternoon by Miki, a dog of breed border collie of the canine unit of the autonomous police. Dozens of agents, firefighters, civil guards and Maritime Rescue agents had been searching for the baby for 72 hours. The mayor of the Mossos d'Esquadra, Montserrat Estruch, lamented minutes after finding the body: "The outcome is very sad but I can't help feeling proud of the work we've all done."
The problems for this couple of teenagers living in a humble neighborhood of L'Hospitalet de Llobregat began months ago when they decided to hide that she was pregnant. They made it.

Last Monday the contractions began. Childbirth was imminent and they had designed a plan to keep hiding what was already inevitable. The two young people went to a hostel in their own municipality, the Cool & Chic Hostel Barcelona. They booked and paid for a private room. There, without any kind of health aid, the young woman gave birth. On Tuesday morning they left the hotel without arousing any suspicion as the receptionist said he prefers to remain anonymous.

After leaving the hostel, the track of both young people is lost until the afternoon of that Tuesday, September 24. At 17.30 the young man, alone, had crossed the entire city of Barcelona and was walking with a suitcase over one of the bridges that crosses the Besòs river and links the Catalan capital with Sant Adrià. He opened the suitcase, removed the newborn from within, crossed an area of ​​tall vegetation and entered the river. When he came out of the water there was no trace of the baby. He left the empty suitcase in the brush and left.

The place where he got rid of the newborn is surrounded by cameras, high floors and leisure areas that were especially busy that day as it was festive when coinciding with the Mercè (patron saint of Barcelona). The young man came out of the water and wet entered the La Catalana bar run by an Asian family.

Meanwhile, the emergency telephone number - 112 - had already received several calls alerting that a young man had gotten rid of a creature in the river.

Matías is a customer, more than usual, of La Catalana bar. I was at the bar when the young man entered with a towel around his neck. "He said he had a suitcase stolen," he recalls. In the recording of the camera of surveillance of the commerce the young person, apparently calm, is observed to go to the bar. He asked to leave a mobile charger and made several calls. Minutes later his father appeared - the baby's grandfather - outside the bar and they left.

112 also received the phone call from the baby's grandfather who did not report what happened, but alerted that his son had stolen his suitcase. The call alerted Mossos d'Esquadra agents who began to suspect. It was not necessary. The young man and his father showed up minutes later at the L'Hospitalet de Llobregat police station after, once again, crossing all of Barcelona. There, the child acknowledged having moved the baby into a suitcase and thrown into the river.
The teenager, of Bolivian origin, was arrested. The baby's mother, also of the same nationality, was taken to the hospital. Agents try to find out if she knew her boyfriend's murder plans.