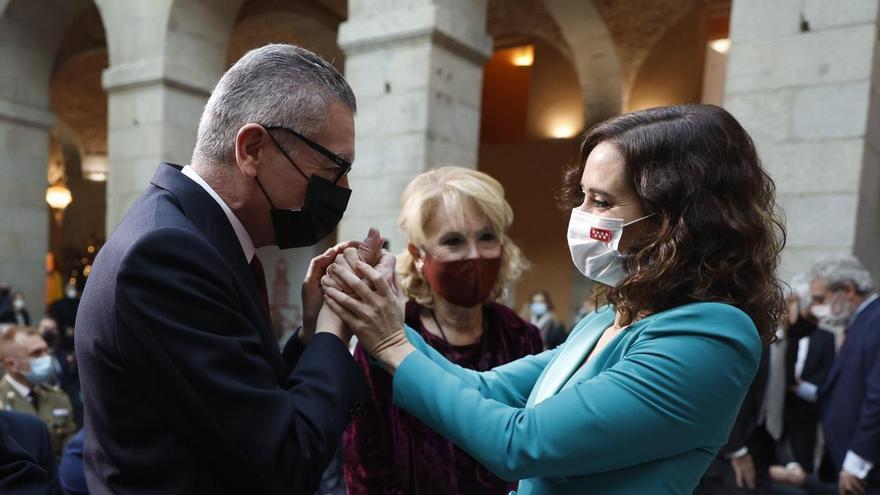 The former Minister of Justice and former Mayor of Madrid, Alberto Ruiz-Gallardón, commented this Wednesday with the former Minister and former President of the Community of Madrid, Esperanza Aguirre, with whom in the past he had a sounded internal battle for control of the Madrid PP, the Rise of Isabel Díaz Ayuso: “The Ayuso thing is unstoppable,” Gallardón told Aguirre.

The former minister’s statements took place during an informal talk captured by photojournalists at the commemorative act of the 43rd tribute to the Constitution that was held at the Royal Post Office in Madrid, headquarters of the regional government.

Ayuso has invited his predecessors to this event. There were sitting in the front row Joaquín Leguina, Ruiz-Gallardón and Esperanza Aguirre. He greeted all of them before the start of this act, where he criticized those who seek to “demonize” the Transition and “dynamite” the constitutional order “through the back door.”

Warm greetings from Gallardón and Ayuso

Gallardón, who has affectionately greeted Ayuso by kissing his hands, has emphasized that “unstoppable” rise of the Madrid president with this comment on her main political adversary for years. In the game, the confrontation between Aguirre and Gallardón in the past is well known, which caused former president Mariano Rajoy to pull irony and make the famous phrase of the Count of Romanones his own “Fuck, what a troop!”.

Rajoy himself has praised these days in his public speeches – on the occasion of the presentation of his book ‘Politics for adults’– Ayuso’s “courage”, who has had to “make decisions in hard times” and “has earned the respect of the people.”

Speaking to journalists at the end of the event at Puerta del Sol Aguirre described Ayuso’s speech as “fantastic” and pointed out that the intervention of the Government delegate, Mercedes González, had also been “good”. “The PSOE has to return to the spirit of the Constitution and the delegate I think has made a good speech as well,” he added.

Aguirre: the last congress was in the “Pleistocene”

When asked at another time why the management of Pablo Casado is suspicious that Ayuso is the president of the party in Madrid, Aguirre has indicated that this should be asked to the national leadership of the PP and has underlined that the president of the Community of Madrid has already said that she is going to present herself to the regional congress.

That said, he stressed that the Law on Political Parties and the PP Statutes “say that they have to have a congress every four years at most.” And he has stressed that the last one was at the time of the “Pleistocene”, in February 2017, when Cristina Cifuentes won. “We are going for five years,” he emphasized.

Upon arrival at the event, Aguirre said that she believes that the mayor of Madrid, José Luis Martínez-Almeida, is not going to present itself to the regional congress of the Madrid PP, which is scheduled for the second quarter of 2022. Almeida arrived shortly after and, when asked about those words, Aguirre herself has specified: “I believe, hey, I said that maybe they’ll convince you. ” “Do you introduce yourself?” The mayor asked him then, and the former president of Madrid joked: “I’m doubting it.” Both have then greeted each other affectionately and Almeida recalled that he is in politics thanks to Aguirre.