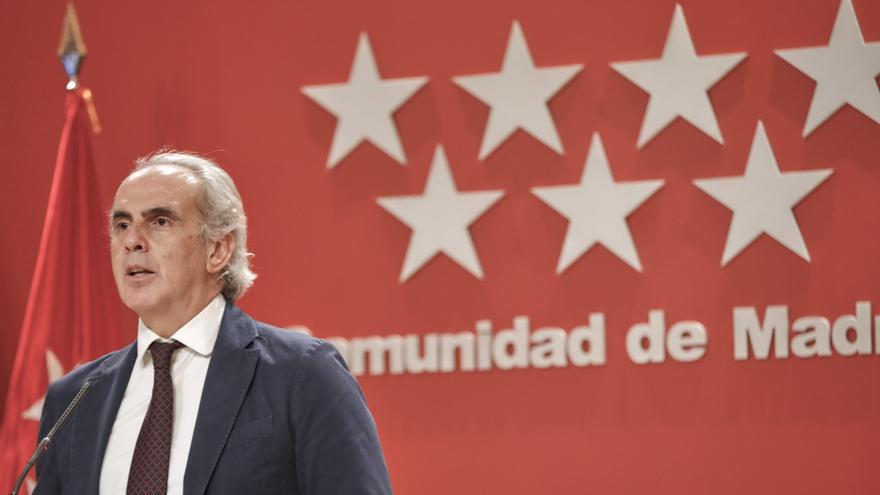 The Community of Madrid has requested this Tuesday the Ministry of Health to “reconsider” the order imposed last week that has led to the perimeter closure of the city of Madrid and nine other municipalities in the region. The Minister of Health of the Community of Madrid, Enrique Ruiz Escudero, has assured that the data is “improving” thanks to the previous measures of restriction of mobility through basic health areas that the regional government imposed and asks to return to that model.

“The Community has a plan and this plan, I say it with the utmost humility, it works,” Escudero said at a press conference after the bilateral Covid-19 meeting that the regional government holds every Tuesday with the Minister of Health, Salvador Illa , and the Minister of Territorial Policy, Carolina Darias. “We have asked Illa to reconsider the order imposed last week,” insisted the Madrid minister.

The head of Health has also criticized the central government questioning the Madrid figures due to a sharp drop in cases in the region – from more than 700 cases per 100,000 inhabitants on Friday to less than 600 on Monday: “The regional government is not going to allow this information to be questioned, so I have made it known,” he assured. Ruiz Escudero has regretted that the figures have been questioned because that means “questioning the data of health personnel.” “We request the maximum from the professionals of the Directorate of Public Health and Sermas, as trained and as prepared as the Ministry’s technicians,” he declared at a press conference, after presenting it at the meeting held by the Covid-19 Group.

“When the Madrid data was good in July, it was suspicious. They got worse and were credible until now that they get better again. And instead of responsibility, they opt for the message of fear with Madrid ”, Isabel Díaz Ayuso had written on Twitter at around two in the afternoon, at the time when the Covid Group’s pandemic monitoring meeting was to begin -19, formed by the central Government and the Community. The appointment started half an hour late.

Escudero has given figures of this “improvement” of which the regional government has been boasting in recent days and which he attributes to the closure of 45 basic areas in the region. The counselor has ensured that the cumulative incidence per 100,000 inhabitants in 14 days has dropped to 598 cases, compared to the 813 infections that were registered a week ago. These data, however, do not coincide with those provided this Tuesday by the Ministry of Health, which places this figure at 710 cases per 100,000 inhabitants in the last 14 days. The general director of Public Health, Elena Andradas, has not been able to explain the difference in the data between one administration and another.

Also as of October 5, Escudero has indicated that in nine districts of Madrid capital (Arganzuela, Retiro, Salamanca, Chamartín, Chamberí, Fuencarral-El Pardo, Moncloa-Aravaca, Ciudad Lineal and Hortaleza) the cases have dropped below 500 per 100,000 inhabitants. In the same way, the municipalities of Alcalá de Henares, Alcorcón, Móstoles and Torrejón de Ardoz have also dropped below 500 cases. In addition, in the COVID-19 Surveillance Epidemiological Report, which closes with data from Sunday, October 4, the municipalities of Alcorcón and Torrejón de Ardoz and the districts of Ciudad Lineal, Retiro and Salamanca had not yet lowered the threshold of 500 cases per 100,000 inhabitants.

For all this, the counselor has assured that he has requested that the restrictions imposed by the Ministry of Health be lifted after they were approved by a majority in the Interterritorial Council last Wednesday.

Escudero’s press conference with Andradas and the Deputy Minister of Public Health, Antonio Zapatero, took place after the meeting held this Tuesday with the Minister of Health, Salvador Illa, and that of Territorial Policy, Carolina Darias, in which he also The vice president of the Community of Madrid, Ignacio Aguado, participates in the framework of the ‘COVID-19 Group’, which they created two weeks ago to coordinate the control of transmission in the region.

It is the first meeting that takes place between the parties after on Friday the Community carried out the closure of ten Madrid cities that Health decreed, despite the fact that the regional government opposed the restrictions that it has taken to the courts. From this meeting the summons to “establish a daily technical analysis mechanism” of the situation has come out. The Community of Madrid and the Ministry have given more details about how this mechanism will be, but it would go beyond the daily surveillance of all the communities carried out by the Center for the Coordination of Health Alerts and Emergencies directed by Fernando Simón. Both parties have also pledged to hold “weekly mixed meetings for the purpose of greater coordination, both in the technical and territorial fields.”

The Community of Madrid has notified 2,645 new cases of coronavirus this Tuesday, of which 1,220 are assigned to the last 24 hours and the rest to previous days, and 45 deaths in hospitals, according to the report of the epidemiological situation of this Tuesday, with data at the close of the previous day.