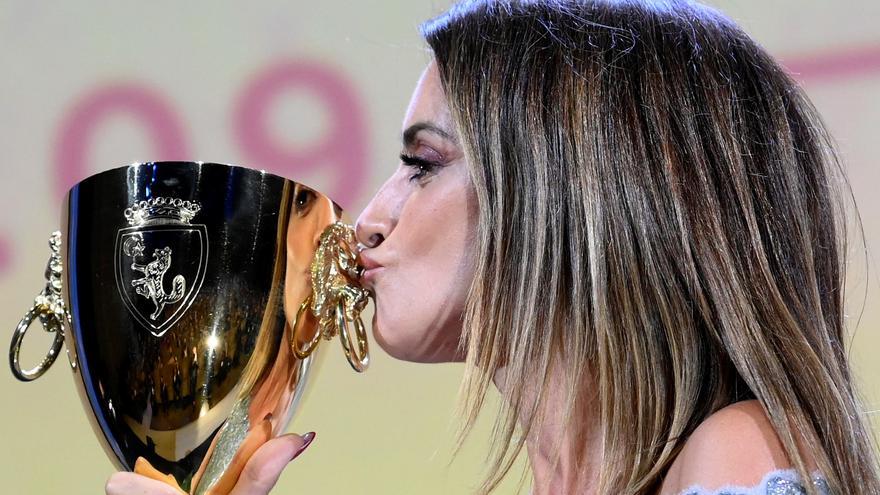 Venice (Italy), Sep 11 (EFE) .- Penelope Cruz won the Volpi Cup today for the best actress at the 78th Venice Film Festival for her work in “Parallel Mothers”, by Pedro Almodóvar, becoming the first Hispanic to do so.

When collecting the award and at a subsequent press conference, the Madrid actress stressed that it is “one hundred percent” from Almodóvar.

“Thank you for trusting me, for inspiring me in the search for truth on and off the set, for your impeccable ethical work, very difficult to find in these crazy days, for your dedication to detail, you have created magic again and I am proud to be part of it, “said Cruz on the Lido stage.

She dedicated the award to the entire cast of the film, to her husband Javier Bardem, present at the gala, to their children, Luna and Leo, and also to the “parallel mothers of her life”: her mother Encarna, her ” best teacher and friend “and her mother-in-law Pilar Bardem, who recently passed away and who she said did” a lot “for Spanish actors and actresses.

The Madrid actress competed twice, since she has also participated in the official section with the comedy “Official Competition”, by the Argentines Mariano Cohn and Gastón Duprat and co-starring with Antonio Banderas and Oscar Martínez.

The president of the jury, Bong Joon-ho, assured at a press conference after the gala that it was very difficult to decide between his two jobs. “It was a tough decision because he has done a great job also in ‘Official Competition’, we discussed a lot about it,” he said.

Cruz insisted that the character of “Parallel Mothers” has marked him a lot and thanked Almodóvar for his level of demand. “He has demanded a lot of us and I thank him, he is at such a high level that you think he could give his life for it and it is a contagious feeling, you do not want to disappoint him.”

This is not only her first Volpi Cup but also the first time that this award has gone to a Hispanic actress. Before her, he was won by acting heavyweights such as Bette Davis, Vivien Leigh, Sophia Loren, Cate Blanchet, Tilda Swinton, Julianne Moore or Olivia Colman.

The most international Spanish actress and the first Spanish actress to win an Oscar for “Vicky, Cristina, Barcelona” (2008) by Woody Allen, remembered again today the first time she arrived at the Venice Film Festival with “Jamón, jamón” (1992) by Bigas Luna, who won a Silver Lion for that work.

“I was 18 years old, I came with Javier (Bardem) and Jordi (Molla), I hallucinated a lot with everything and did not imagine that one day this would happen to me,” he said.

Nominated twice for an Oscar – for “Volver” (2006) and for the musical “Nine” (2009) – she also has in her particular track record the award for best actress at the Cannes Festival for “Volver”, in that case shared with the rest of the female protagonists of the film.

In “Parallel Mothers”, a film that intersects the theme of motherhood and historical memory in Spain, Cruz gives life to Janis, one of the two leading women -the other is Milena Smit- who coincide giving birth to their children in the hospital, which creates a special bond between them.

In addition, Janis, a professional photographer raised by her grandmother, is determined to fulfill her last wish and find the remains of her great-grandfather shot and buried in a gutter at the beginning of the war.

On the subject of historical memory that the film addresses, Cruz said that the director from La Mancha “does something very important with this film, that the subject goes around the world and more is known about it.”