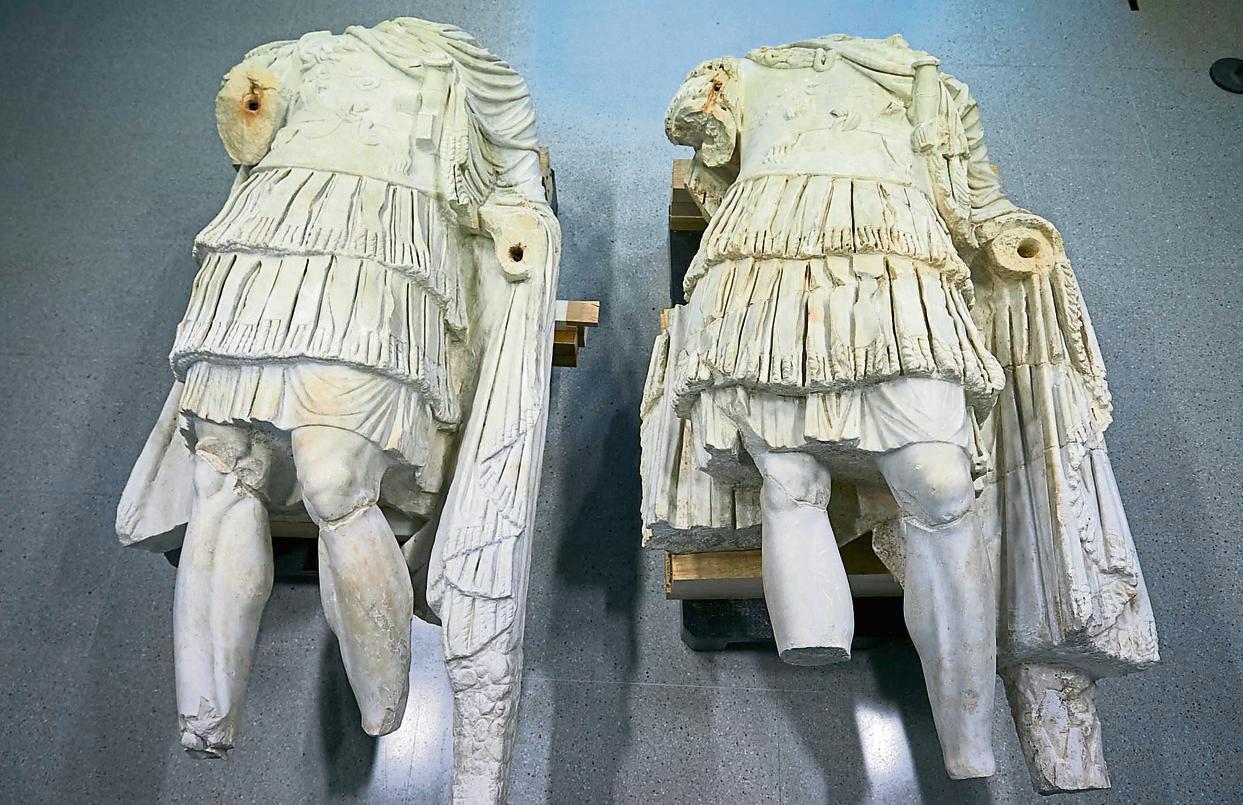 For almost four weeks, a team of three restorers He has worked thoroughly in two of the monumental sculptures that a century ago they found themselves in the roman theater of Tarragona. The integral remodeling of the building of National Archaeological Museum of Tarragona (MNAT), which has closed for reopen in 2022 completely renovated, it has allowed for the first time to review and clean up all the collection, especially the pieces coming from Tarraco Theater, built during the 1st century and the only one preserved in Catalunya. The new address of MNAT now places this monument, practically abandoned for forty years, as a strategic axis of action.

Several projects pivot on this site located in the port district of Tarragona, far from the usual monumental circuit, which is concentrated around the Roman walls, in the upper part of the city. In parallel, various actions progress, mainly cleaning and thorough study of the pieces found in the theater. Most were located during the excavations carried out in 1919 by the archaeologist Francesc Carbó, through the Institut d'Estudis Catalans (IEC), then under the baton of Puig i Cadafalch.

To commemorate the centenary of that first scientific incursion into the theater – which was done so that an oil factory could be built on it – the book has just been presented Archaeological Trophies at the theater romà de Tarragona , which reproduces the newspaper, with detailed drawings and notes of all the pieces, which Carbó himself made. The reproduction of the manuscript, guarded and digitized by the Library of Catalonia, is accompanied by articles by several scholars of this monument, such as Josep Anton Remolà (responsible for the scientific edition), Jaume Massó, Xavier Domingo, Diana Gorostidi, Jacinto Sánchez Gil or Julio César Ruiz. These last two with theses in progress on the theater and the statuary of Tarraco.

"Until 1884 the Roman theater was perfectly preserved, much was lost by the construction of the oil factory in 1920 and its subsequent extensions, and then the bombings during the civil war," explains Josep Anton Remolà. The situation worsened during the fifties and in the seventies the neighborhood protests halted the construction of new buildings on the estate that occupies the theater. The monument, such as the Necropolis, the Roman town of Els Munts or that of Centcelles is integrated into the MNAT, owned by the State but managed by the Generalitat. The rest of the monuments that make up the whole of Tarraco, which 19 years ago Unesco declared a world heritage site, are mainly municipal property.

The remodeling of the Archaeological Museum, now under construction, allows the entire collection to be cleaned up

To complete the study of the theater, at the end of January the archaeologists will return to the charge. "We will work in areas that have never been excavated, mainly at one end of the stage and the moat," explains Joan Anton Remolà. Once these works are finished, “we can decide how the theater is definitely presented to the public,” says Mònica Borrell, director of the MNAT, who insists that “the theater has enormous potential and a long journey, it is not something we can see finished in the short term but all the initiatives add up to end up integrating this monument in the neighborhood, also adding the thermal springs of Sant Miquel that now cannot be visited and thinking of a future interpretation center ”.

Borrell keeps alive the strategic plan of the theater that was presented in 2015, when Ferran Mascarell was in charge of the Ministry of Culture and when the main action that so far has been carried out in the monument and that has not been approved was approved free of criticism: a steel armor designed by the architect Toni Gironès that reproduces the volume of the first steps. In this intervention, which culminated in the middle of last year, the administrations invested 750,000 euros (553,000 euros the Department of Culture and 197,400 the Ministry of Development through 1% cultural). The criticisms were not made wait not only for the aesthetic impact of the structure but also for the maintenance problems that it generates, not in vain, some spots of oxide in the deposit have already been detected.

Those responsible for the Catalan Cultural Heritage Agency have downplayed these spots and Borrell sets his objectives beyond the controversy: “At the level of visit, the structure works, what we still need are elements of global interpretation and openness and integration of the monument in the neighborhood and that is what we are going to work on, ”he says.

Far from public view, the updating of the collection of sculptures and pieces from the theater also progresses. Several pieces have passed through the Restoration Center of Béns Mobles de Catalunya, such as the two monumental sculptures that will be exhibited again in the “new” museum. "The main objective was to clean them because they hadn't touched each other for more than fifty years," explains conservative and restorative Pau Arroyo. These two concrete pieces, in which remains of original polychromy have been found, had fragments of cement attached to them that were attached to the wall of the old museum. "Now we are studying how we will present them in the future exhibition," Borrell adds. The new museum discourse, in which the interpretation of the theater will have a leading role, is another of the fronts that the MNAT has open. The building closed in April 2018, with the intention of opening in 2022 completely remodeled. Meanwhile, in Tinglado 4 of the Moll de Costa, a selection of the most emblematic pieces, 160 in total, is shown.