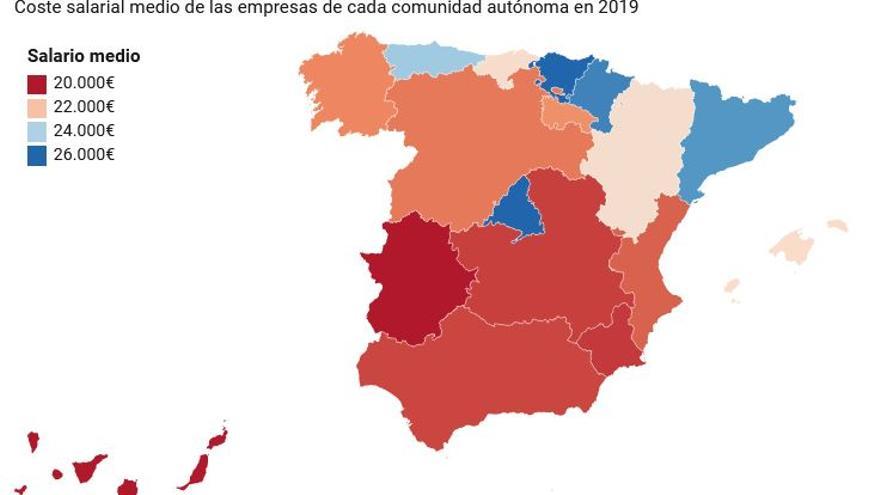 In 2019 the average salary in Spain reached 23,450.25 euros per year gross, according to data published this Wednesday by the INE in its Annual Labor Cost Survey (EACL). That is, 1,954 euros per month in 12 payments or 1,675 euros per month in 14 payments per year. The data, which does not include wages in agriculture or domestic employment, represents an increase of 1.9% in the average wage compared to that recorded in 2018, the largest year-on-year increase in the last decade, since 2008, when wages increased by Average 3.2%.

Wage costs make up the majority of total labor costs measured by this INE survey, which also incorporates other items such as the contributions that companies pay to Social Security, severance payments, other recognized social benefits to workers and costs related to work, among others. In total, the labor costs per worker were 31,834.62 euros per year gross during 2019, 2.4% more than the previous year.

The increase in wages occurred in the three main sectors of activity studied by the INE, with the greatest increase in the service sector (+ 2.2%), although it is the one with the lowest average salary of 22,723 euros per year gross. . Construction increased its salaries on average by 1.7%, reaching 22,812 euros per year on average, and lastly, the salary increase in the industry was 1.1% last year, to 27,783 euros per year on average. The survey methodology recalls that “the sections of Agriculture, livestock, forestry and fishing (A), Household activities as employers of domestic personnel (T) and Activities of extraterritorial organizations and bodies (U) are excluded.”

It must be remembered that in 2019 the Government approved the interprofessional minimum wage of 900 euros per month, the largest increase in the SMI registered in democracy (of 22%), but the public data provided by the INE on Wednesday do not allow conclusions to be drawn from causes- effect between this increase and the average wage increase that occurred in the year. For example, some of the sectors with the lowest salaries, hospitality and retail trade, increased their salaries by 1.6% and 0.9%, respectively, lower than average data and those of many other sectors. Other activities with very low wages, such as domestic employment, do not even enter this statistic.

After the average salary data of 23,450.25 euros per year gross in Spain, there are enormous differences between sectors of activity. The best paid are the supply of electrical energy, gas, steam and air conditioning, with 58,786 euros per year gross, followed by coke ovens and oil refining (54,769 euros) and financial services, except insurance and pension funds (54,735 euros). ).

8,900 euros more per year in Madrid than in Extremadura

In addition to the wage differences by sector, and sometimes explained by these (among other reasons), the distances in the average wages of the different Autonomous Communities stand out. The one with the lowest wages is Extremadura, with 19,195 euros a year gross, and the one with the highest-paid workers is the Community of Madrid, with an average salary of 28,044 euros a year gross. About 8,900 euros a year distance both regions.