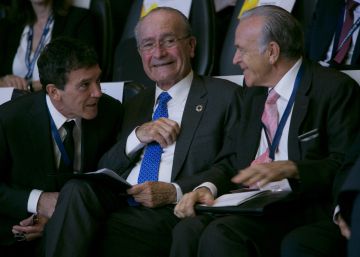 Isidro Fainé, as every year for these autumnal dates, it becomes the habit of leader of the Spanish Confederation of Directors and Executives (CEDE) and takes advantage of the celebration of the annual congress (this year has been the 18th) to review the news and launch its proclamations. At the call of the president of the La Caixa Foundation, in addition to executives from the Caixa universe, representatives of the Government, usually the head of the Economy; of the autonomous community and the locality where the event is held, and the King, who since 2017 is honorary president of the CEDE Foundation. This year it was celebrated in Malaga and they were the mayor (Francisco de la Torre) and the president of Andalusia (Juan Manuel Moreno), but the national politicians, involved in the electoral campaign, and the King, whose agenda prevented him from attending an act in which he feels comfortable and usually pampers, as he did last week with the Family Business Congress.

So the more than 1,400 assistant managers did not receive electoral messages, although there were political messages focused on social issues of some of the speakers and the role of companies in this regard. It happened with the president of CaixaBank, Jordi Gual, who offered a very well armed discourse against populisms; with the president of the CEOE, Antonio Garamendi, who again demanded dialogue; with the opinions of Shlomo Ben-Ami Y Javier Solana, and with the intervention of Fainé himself.

Gual appeals to reason against emotion. Jordi Gual, president of CaixaBank, has signed up to the social commitment as recently did Ana Botín, president of Santander. Gual, in his speech at the congress of executives, attacked populisms, which he described as the “triumph of emotion over reason,” and asked companies to fight them, as well as to get involved in the struggle to confront the major social, technological and economic challenges such as digitalization and climate change. In his opinion, these challenges impact the strategy of the companies. "As business leaders we have a responsibility and a commitment to society, we cannot stay out of the way," he said, stressing that they must go beyond profitability.

Geopolitical debate between Solana and Ben-Ami. The directors' congress offered the opportunity to listen to Javier Solana and Israeli politician Shlomo Ben-Ami, who shared a table and concerns about the global geopolitical situation. Both agreed to highlight the impact of globalization and the evolution of capitalism as a productive model. “It is the only model, but capitalism is not equal to democratic society. He has won, but he has not won democracy and it is essential to fight against inequality because inequality generates poison and poison causes extremism. ”

De Meo's elucubrations on the electric car. The president of Seat, Luca de Meo, snatched laughter in the auditorium of the congress of managers when he said that electric cars can only be bought by the rich, "like you, those who are here, as happened in 2007 with the iPhone." He was obviously referring to the current price of these vehicles and that their evolution will make them more accessible and he asked for alternatives to do so. In any case, he stressed that his group has proposed to sell an electric car every four in 2025, among other things so as not to have to pay millionaire fines.

The veteran executive of Manresa returned, as in previous editions, to leave his private recipe book without deviating from his requests for structural reforms. And if in the previous editions he had demanded a “third change in economic policy”, in this he stressed the need for “after the elections on Sunday to open the appropriate negotiation spaces with a view to agreeing” on these reforms. And he practically repeated the paragraph demanding the improvement of “the quality of the education system, the proper functioning of the labor market and the successful design of the tax system”.

In 2018, Fainé stressed that the Government of Pedro Sanchez He was aware of this, "as is well shown in the plan he has sent to Brussels (the Change Agenda)". This year has not made any praise or reference to the programs of the parties, no doubt because it did not play, and has focused on “the formidable combination of technological, social and political forces that will profoundly change the markets in which our companies compete” . "No one will escape the challenges," he said, "of this new era."

Very given to elaborate master formulas, he left a decalogue with the “issues” that companies should watch carefully:

"The political, technological and social forces will change markets deeply"

"Our role as managers is to anticipate trends, know how to win the future"

1. Technological innovations are going to be faster and more disruptive, especially digitalization.

3. Education and continuing education will be the key to personal and social progress.

4. Digital technologies threaten the privacy of individuals, as well as the security of companies and governments ("there will be a remedy").

5. The mentality of young people is increasingly open about the occupations they are willing to perform and the countries where they live.

6. The new generations show values ​​and behaviors very different from the previous ones. They combine greater individualism in the workplace and a more intense social commitment.

7. The awareness of preserving the environment and the sustainability of the planet is increasingly widespread.

8. The demographic transition begins to be seen clearly, with the decline in birth rates and the accelerated aging of the population.

9. Inequality in income distribution and wealth threaten the social order.

10. The global geopolitical and geoeconomic map is subject to a process of convulsive change.

Faced with this, Fainé leaves its mark on the managers for the management of the companies: “We must anticipate trends to build our business future, the task is to know how to win the future. The path is to achieve simultaneously the commitment of employees, customer loyalty, shareholder satisfaction and recognition of the company. If a company is strong in all four aspects, it will be unbeatable. ” And he concluded: "If we do not change things continuously, the world will change us and our companies."

This year's directors' conference was attended by Antonio Banderas, taking advantage of the celebration in his hometown and that La Caixa sponsors his theater. The actor and producer (pictured with the mayor of, Francisco de la Torre, and Isidro Fainé) spoke about his vision of leadership: “A good businessman is the one who feels rich not because of the amount of money he accumulates, but because of the number of families that make a decent life possible ”; "The modern leader is not an enlightened one who fights against windmills."

Idealista warns, about the control of rental prices, that the investment “will flee” from where it is applied