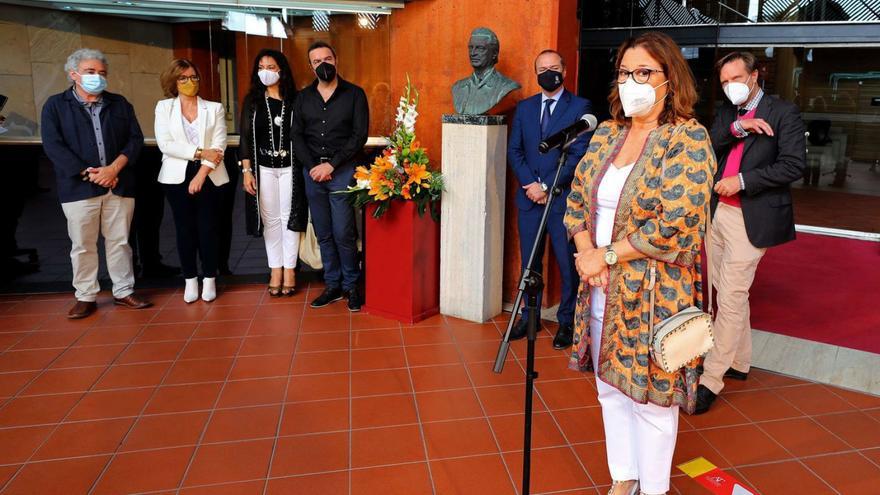 The Alfredo Kraus Auditorium yesterday hosted the traditional floral offering that takes place every year in homage to the 94th anniversary of the birth of the Gran Canaria tenor Alfredo Kraus. The mezzo-soprano Nancy Fabiola Herrera and the bass baritone Simón Orfila will also star on Wednesday in a concert in tribute to the tenor Alfredo Kraus for this reason, in which they will perform opera and zarzuela pieces that "will make the audience laugh and cry", to which they assure a «Journey of emotions».

This was stated by Herrera and Orfila, who was a disciple of Kraus, in the traditional floral offering that Las Palmas de Gran Canaria makes every year to the tenor in the Auditorium that bears his name.Rosa Kraus, one of the singer's daughters and president of the Foundation that bears his name, together with the mayor of the city, Augusto Hidalgo, among other personalities, participated in the tribute that preceded the concert in which the Gran Canaria Philharmonic Orchestra will also intervene under the direction of its teacher, Karel Mark Chichón.

The mezzo-soprano Nancy Fabiola Herrera and the bass Simón Orfila expressed the "happiness and pride" they feel for participating in the tribute to one of the great masters of the lyric. Orfila assured that he owes him a lot of what he has been doing in the last 24 years and is still trying to learn "the most" from the advice given him by "one of the best singers in history." Herrera stated that he had the opportunity to meet Kraus, although not to work with him, and appreciated the work of the foundation in spreading the work of the tenor, which carried the name of Gran Canaria throughout the world.

Works by Rossini, Chueca, Sorozábal, Chapí, Giménez and the Penella brothers will be performed

The program, devised by the foundation, the artistic director Mario Pontiggia and the conductor of the orchestra, includes works by Rossini and the teachers Federico Chueca, Pablo Sorozábal, Ruperto Chapi, Gerónimo Giménez, Pablo Luna and Manuel Penella.

From Rossini the public will be able to listen to the symphony of The Barber of Seville, Basilio's aria, La calumnia; and fragments of The Italian in Algiers. The prelude to La joy de la huerta (Chueca), La tabernera del puerto (Sorozábal), El barquillero and the prelude to La Revoltosa (Chapi), as well as María del Pilar (Giménez), are some of the pieces that Herrera and Orfila. The mezzo-soprano recalled that Alfredo Kraus was a "great defender of the zarzuela", a genre that is part "of the national lyrical heritage and of which one should be proud," he added.

The tenor's daughter said that she will attend the concert accompanied by her sister Patricia, on behalf of the Foundation and the family, and thanked one more year for the tribute paid to her father, which fills her with "emotion, memories and affection ».

The two artists who will star in the concert are also "great" authors, "friends and very loved" by their family and "by everyone," stressed Rosa Kraus.