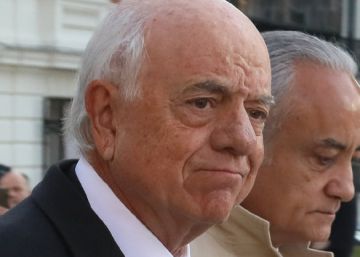 Francisco González, former president of BBVA, one of the most powerful Spanish bankers in recent decades, was charged in the BBVA-Villarejo case and went to the National Court on November 19 to testify before Judge Manuel García Castellón. According to his lawyer, he answered all the questions, although he did not know the summary of the case and therefore ignored the crimes that could be charged.

For more than two and a half hours, anti-corruption prosecutors asked Gonzalez if he ordered or if he knew who decided to hire retired commissioner José Manuel Villarejo to spy on political leaders, journalists and businessmen from 2004 to 2017. In the first audios (which You can listen below) addressed the attempt by the construction company Sacyr to gain control of the banking group between November 2004 and February 2005, at which time Villarejo enters BBVA's orbit.

The former president derived all responsibility for the hiring of the retired commissioner in Julio Corrochano, BBVA security chief and Villarejo's partner in the police, an argument that prosecutors have not believed. "Today I was able to answer with all transparency and with total clarity," Gonzalez summed up after leaving the audience.

Prosecutor: The purpose of that first contract [de Villarejo, la relacionada con Sacyr]specifically what was it?

Francisco González: “In the business world it is important, in the case of this operation that they tried to keep a bank that was 40 times larger than a small construction company that already had a reputation for being very aggressive, and I will leave the aggressive word there, the important thing They are the actions. How many actions you have to take control. To me that the Government supported that operation seemed somewhat unpresentable. But it was impossible, except for an assault, what do I know, let's say the army would keep a bank if it didn't have the shares.

The judge asks him if he asked for someone to collect some information from competing companies or people who wanted to access the bank.

Francisco González: We had to know who is behind this operation, who are the people and how many BBVA actions they represent because it did not seem logical that an operation of that size [el intento de asalto de la constructora Sacyr al banco] could be launched with those means. Then Mr. Corrochano does say that he can get a detective company to get that information. And there, nothing else was said, but implicitly he was given permission to do so.

Question of the judge: That was in…?

Francisco González: That could have been at the beginning of December of the year 2004.

Prosecutor: Do you know if that detective company understood that you had to take aggressive and destabilizing actions to protect you or the bank?

Francisco Gonzalez: How will I know that, if I didn't know what the detective company was hired. And how are you going to do one of those things taking into account against the bank's code of conduct.

Prosecutor: I am going to show you these two contracts that I announced a while ago, from December 2, 2004 and January 3, 2005. Apparently they were the service contracts [de la agencia de detectives de Villarejo].

Francisco González: When he proposes, Mr. Corrochano, sign a detective company [Francisco González se pregunta]: It is legal, it is legal. It is morally acceptable, it is. And it is publishable, it is. We are not going to publish it because of those things there is no need to advertise, but it was in my code [la doctrina FG].

Question of the judge: But he doesn't specify which company?

Francisco González: Not at all.

Fiscal Question: What I did want to understand is that it was implicitly authorized [a Corrochano] to hire him, with a nod.

Francisco González: Assent to hire a detective company. I repeat, I asked myself the question at that time: it is legal, it is morally acceptable and it is publishable ... yes.

Fiscal Question: What information did Corrochano give you to consider it legal?

Prosecutor's question: What people should have heard [de la contratación de la empresa de Villarejo] so that the bank did not pay an active policeman more than 10 million euros for 13 years?

Francisco González: The only person who, if he has information, is the security department. And I don't want to focus the issue on the boss, director ... but on the security department. It is the only part of the bank that has apparently worked intensely with these people, who are professionals, they should know exactly the condition of the company they are hiring and the particular condition of Mr. Villarejo.

Legal question: Did he ever tell you that he was a person who was usually working for the bank?

Francisco González: Absolutely. If you tell me that, the consequences would have been tremendous, of course.

Prosecutor: Do you have an explanation of why the actions include the traffic of calls from multiple people within the framework of that contract?

Francisco González: None. It seems to me that all this is a tremendous fudge, frankly, it is my opinion.

Fiscal. Did you ever distrust the service that the detective agency was providing [a Corrochano]?

Francisco González: For me it was a minor issue. Telling a bank security chief if this agency did well, badly or regularly is not my job. That is a function of your boss or other people who control your activity. A president does not make such comments to people who do not report directly to him.

Prosecutor: In this specific case, which are several contracts with modifications, with extensions and with variations in the success premium as part of the price ... Should you have known who negotiated the terms and prices [de los contratos con la agencia de detectives sobre el contrato para recuperar parte de la deuda de Colonial]?

Francisco González: That is not the function of the president. We are talking about figures that in the bank as a whole are not relevant. So that I know that something is happening or requires my attention, it is usually not a magic figure, but normally it is 50 million euros up. Therefore, it would be abnormal for me to know anything about those contracts.

Prosecutor: And the scandal when you find out that you are leaving?

(The former president of BBVA cites May 2018 because that is when the newspaper Public brings out the first payment invoices from BBVA to Villarejo. Corrochano had pre-retired a couple of months before).

These are the cheapest hours of electricity this Wednesday, July 6