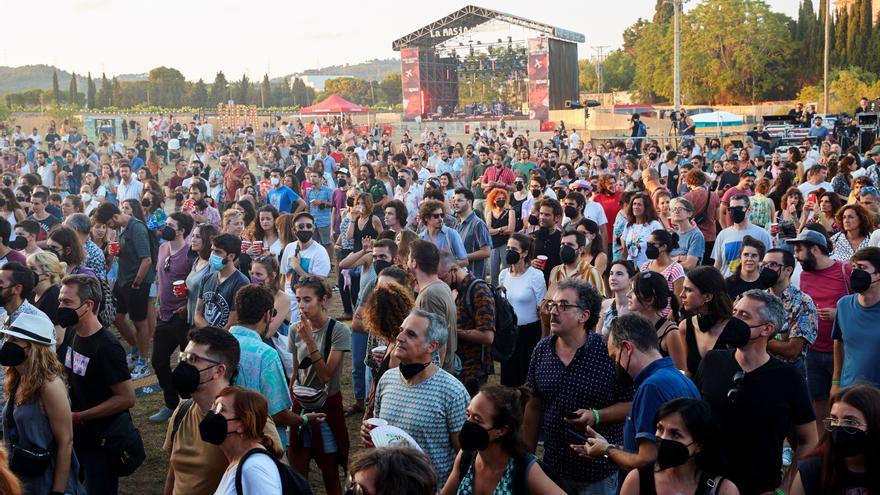 Vilanova i la Geltrú (Barcelona), Jul 1 (EFE) .- Reaching the sky, which in times of covid can be something as simple as attending a music festival without distances, is not easy, as the public has verified this Thursday del Vida’21, which has had to endure long lines to access the first post-pandemic festival.

It is also true that the more it costs to achieve something, the more it is enjoyed, and the spectators have left the area enabled to perform the previous antigen tests (purgatory) with a bad body that has been transformed into joy as soon as they have stepped on paradise, that is to say, the concert venue, an open-air space with four stages, which is more pleasant, surrounded by vineyards and forests.

Of course, purgatory has neither vineyards nor forests, but is an industrial warehouse of 10,000 square meters where 600 health workers had planned to carry out 1,500 antigen tests per hour, a forecast that has not been fulfilled due to “an incidence with the application used “to collect data from the attendees, according to the organizers.

This has caused long crazy runs that have surrounded the industrial warehouse and that have caused the hard-working public to wait two hours.

“The measures seem safe to me, but I did not expect such a long wait,” said Suzy Ratcliff, an English woman living in Catalonia who has had to queue for an hour and a half.

“I have not had any problem with the application but I have still queued,” added Mireia, a neighbor of Vilanova i la Geltrú and a regular at the festival, who arrived when the incident was already solved but has suffered the accumulated delay.

Most of the spectators have been loaded with patience and have tried not to despair, but some have become nervous when they have seen that the time of the concert of their favorite group was approaching and they were still stranded in the industrial park of Vilanova ia Geltrú, a town in the one that is celebrated in this three-day festival.

After two hours of nightmare, finally a group of three friends have left the antigen zone with the “negative” notification on their mobiles and have run towards the concert zone.

On the way to Masia d’en Cabanya, a ten-minute walk away, the sunset over the vineyards and the distant sound of the voice of the Catalan singer Rita Payés made them accelerate their pace even more.

Once inside, in contrast to the antigen zone, everything has worked perfectly: the concerts on time, the artists dedicated, happy to perform at a festival again, and the audience grateful to be able to move freely from stage to stage. another, even with the mask on.

El Vida was the first festival to apply the protocols rehearsed at the Love of Lesbian concert in Palau Sant Jordi before 5,000 people, but the logistics here have been more complicated because Vida welcomes 10,000 people every day for three days.

Once inside, the festival’s own characteristics have worked in its favor. The venue is outdoors and Vida has always boasted of being comfortable, pleasant and without crowds, circumstances that have made it easier for the most apprehensive to not feel uncomfortable with the many who have removed their masks at concerts.

In principle, the public can only discover the face in the restaurant area, but it is difficult to set limits when people carry the drink from one stage to another.

With their faces uncovered, the spectators, including the recently pardoned Jordi Cuixart, have shown a huge smile at the concerts of The New Raemon, Renaldo & Clara and Biznaga.

A little after the scheduled time, to compensate for the delay in entry due to the queues, Hinds and today’s headliner, Vetusta Morla, arrived, with whom the public touched the sky.

There are still two days of festival left, with Nathy Peluso and Love of Lesbian at the top of the bill and the hope that today’s problems will be solved, as the organization has promised, and it is not necessary to suffer to enjoy.