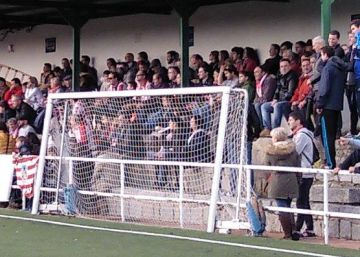 "Delayed", "daughter of a bitch", "scoundrel", "you are doing the asshole", "you are shit", "what a whore you are, whore", "whore, go to scrub", "you are a shit" or " go home, whore. " These were the kind of insults an arbitrator received by fans who were in the stands during a youth soccer match (16 to 19 years old) played on Sunday in San Lorenzo del Escorial.

The meeting was held in the field of La Herrería and was played by the local team, Youth A of the Sports Union of San Lorenzo de El Escorial, club founded in 1919, and the CUC from Collado Villalba. The referee is the daughter of the Councilor for Sports of Galapagar, Mercedes Nuño (of Citizens), who has criticized the attitude of the fans. Mercedes Nuño has denounced that the collegiate had to endure "90 minutes" of such serious insults without "anyone" deigning to condemn them except "a woman (who) has simply seemed exaggerated."

I OPEN THREAD
"Delayed", "daughter of pu", "scoundrel", "you are making the asshole", "you are a shit", "you have taken this afternoon from Apascovi", etc.
Read it whole and in audio at the end. @RFFM_oficial@CAFM_oficial @Futfem

The councilor tells on Twitter that, given the magnitude of the Disqualifications, which claim that they were from local team supporters, addressed them to ask for respect. "What is expected of a tier of fathers and mothers, is sportsmanship and education. However, the response I have obtained has been more insults and disqualifications towards her. To the point of telling me, that if I did not like it, "he explains.

A posteriori Convictions have occurred. It's a statement, the UD San ​​Lorenzo recognizes that a group of fans dedicated themselves to "disrespect and insult the collegiate party." The team has rejected "totally that kind of behavior and any insult" to both the members and the players and technicians. "We don't want you either in La Herrería or in our town," they warn, along with the slogans #NoALaViolencia and #NoALaDiscriminacion.

COMMUNICATED 😡
Yesterday a group of fans dedicated themselves to disrespect and insult the collegiate party between our Youth A and the CUC Villalba
We totally reject that kind of behavior and any insult to colleges, players and technicians
⬇️

The councilwoman has published an audio where the expletives are heard He had to endure his daughter before the "complicit silences", so he feels "helplessness, anger and grief." Silence makes us accomplices. "If we justify these attitudes, what is next? Physical aggression? Let us all do our part so that this does not happen. We should not consider these normal and justified attitudes," the mother adds.

The City Council of San Lorenzo de El Escorial has also lamented and censored verbal attacks by the collegiate and stressed that it considers "any type of violence, including verbal," intolerable towards a woman who is developing her work, and with whom the Consistory is in solidarity ". Therefore, they warn in a statement that these facts are "especially sad in a playful activity, such as football, practiced by young people."

The session has announced that it will ask the club of the locality to take the necessary measures so that these events do not happen again. Remember, also, that next Monday marks the World Day against Machista Violence, a violence that, he emphasizes, "we must eradicate any situation and of course sports." The Civil Guard has no record that the arbitrator has filed a complaint, as sources of the armed institute have told Efe.

Hamilton sets the best time in the first free of the Austrian GP, ​​with Sainz fourth – La Provincia

Bernie Ecclestone, father of his fourth son at 89 – La Provincia