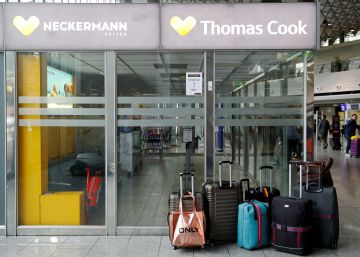 The bankruptcy of the second world tour operator, the British group Thomas Cook, has sown great alarm in the Spanish tourism industry, its main client. Last Monday hundreds of thousands of travelers were abandoned to their fate in 38 countries (53,000 in Spain) behind a Endless list of pending invoices after the failure of a 1,200 million pound group rescue plan. It is the largest bankruptcy lived in the sector, says the president of the travel agency's employer (CEAV), Rafael Gallego, who has witnessed a few due to the transformation of the travel business with the emergence of the Internet and the low cost airlines

A tragedy for the industry, in the words of the Vice President of the Exceltur lobby, José Luis Zoreda, that quantifies the debt of the last three months with Spanish companies at 200 million euros. Throughout the week reactions have not stopped happening, proposals to save the hole that will open its disappearance in tourist destinations and, of course, the first movements of the competition to take over the company's market share.

The immediate consequences of the tour operator's crisis in the markets where he worked will be two: the rise in air fares (as happened after bankruptcies in Monarch Y Air Berlin) and the decrease in hotel companies, whose managers will try to guarantee the 1.2 million places they had hired in Spain, according to Hosteltur. The Canary Islands are a clear example of this. Just two days after the collapse of Thomas Cook Airlines, Ryanair seized the moment to multiply the price of their tickets to the archipelago and Jet2, the low-cost line of the British tour package distributor Jet2 Holidays, has announced 50 additional flights to the islands. While hoteliers, whose dependence on tourist packages to fill their beds is 65%, according to Tom Smulders, vice president of the Federation of Hospitality and Tourism of Las Palmas, have already anticipated their willingness to lower rates.

The Canary Islands are the epicenter of shock plan studied by the Government to avoid the puncture of the industry and one of the main Spanish tourist destinations for foreigners (about 14 million visitors in 2018, such as the Balearic Islands, the second largest affected). And also of the measures that the companies plan to assure the almost million tourists that Thomas Cook was carrying. Because it is now when the Canary high season starts. Ensuring the air connections that have gone to waste is the main way to stifle the situation. Smulders, who knows about the negotiations to try to save some of the group's healthiest subsidiaries (as has happened with the rescued Condor Airlines), see in EasyJet another agile actor to take part of the routes and ensures that "the death of some companies is life for others."

And this is demonstrated by the Stock Exchange, where EasyJet shares have risen 3% this week, the same as they lost in the month until last Monday, when IAG also rebounded, another of the possible winners after the liquidation of the tour operator with 178 years of life, according to Credit Suisse, which adds Wizz Air and Ryanair as possible candidates to fill its place.

Although there is an actor that the market believes can cut the bankruptcy of Thomas Cook, that is the world's first circuit seller, TUI Group, whose shares have revalued 11% this week. The company says that it is still too early to measure the impact that the disappearance of its archrival will have on the industry and rules out its interest in its assets, although the experts consulted say that it has already begun to play its assets. As expected, EasyJet Holidays does it with the hotels of the late Thomas Cook United Kingdom, in which Spanish chains such as Meliá are also interested, according to André Gerondeau, its operations manager.

Because if something is clear about the tourism industry, it is that with the matrix of the British firm the wholesale business of the distribution of travel packages does not die, much touched since the users directly buy trips on the Internet and since the low price war cost. Situation that is now aggravated by Brexit and the slowdown in Germany. TUI Y Thomas Cook have been the last to adapt to changes in customer tastes, to digitalization, although the German says that today 70% of its profits come from its network of hotels, cruises and excursions. But the bulk of its business, which accumulates losses of more than 320 million euros in the first nine months of its fiscal year, remain the circuits, where it recognizes great pressure on the margins.

The all-inclusive travel business may drop 10% in the Canary Islands, Smulders estimates, but the package is more profitable and much needed in long-haul destinations where only the tour operators' planes, such as the Caribbean or Asia, land, Rafael Gallego supports . Between 25% and 27% of international tourists arrive in Spain through these distributors, says Juan Molas, president of the Spanish Confederation of Hotels, who believes that new sales platforms can coexist with traditional ones.

In fact, Laura Hernando, partner of the consulting firm Colliers, points out that analysts do not expect a failure of the model and national and international investors are asking for information on the assets of Thomas Cook. Brokerage has a great future in a sector such as tourism, which grows at rates of almost 4% in the world, that is, above global GDP, concludes Javier Bellido, general director of eDreams Spain.

Booking and Expedia are other contenders in the battle for Thomas Cook's travelers. Especially now that 80% of Europeans hire 'online' and move away from the annual catalog model to opt for personalized and flexible vacations (the so-called “dynamic packages”, whose prices vary according to demand), according to Javier Bellido , from eDreams.

The traditional wholesale model is based on negotiating a quota with hoteliers and charter planes. Hoteliers save the distribution channel with an annual contract that gives them peace of mind, explains Laura Hernando, of Colliers.

Their commissions are opaque, according to André Gerondeau, of Meliá, a company that diversifies risk using its own channel for 30% of sales, agencies ‘online’ in equal measure, tour operators for 20% and the rest corporate sales. In ‘online’ agencies, commissions vary between 20% and 25% of the trip price.