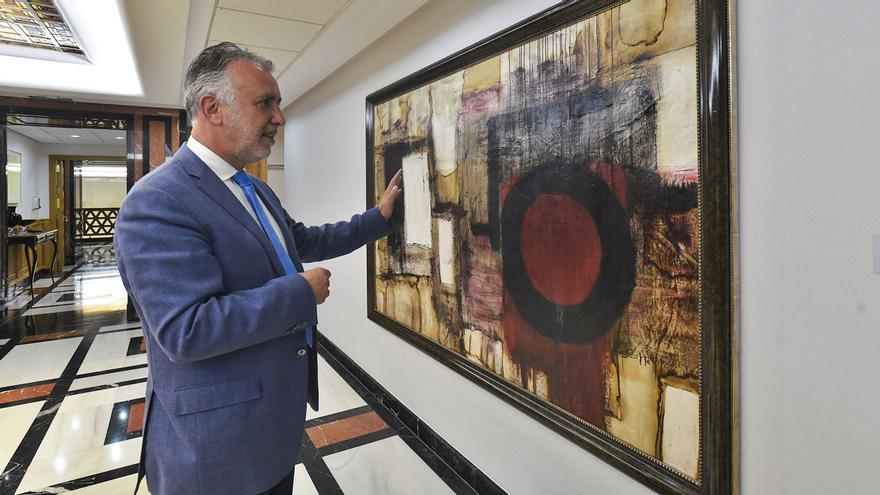 In addition, most of the names that embellish the rooms, anterooms and corridors of the property have been distinguished with the Canary Islands Prize in the modality of Fine Arts and Interpretation that the regional Executive grants each year, since the indigenous painter Felo Monzón, in 1984, in the first edition of the awards, to the sensory worlds of the artist Fernando Álamo, in 2014.

“The paintings give a lot of life and color to the building, in addition to the fact that the collection includes the works of the greatest and these represent, in turn, the artistic heritage of the entire Canarian community,” said Ángel Víctor Torres, President of the Government of Canarias, on a tour around some of the most outstanding paintings and sculptures in the official collection on display.

This artistic anthology began to be forged in the last decade of the 80s from the policy of acquisition of works initiated by Jerónimo Saavedra from his first stage at the head of the regional Executive, who put the first colorful brushstrokes to the official house with works by Felo Monzón, Cristino de Vera and Antonio Saura.

The artistic heritage of the Government Nora Navarro

“Of course, for me it was essential that every office, whether public or private, had pictures on the walls and sculptures on the tables,” recalls Saavedra, who continued this practice throughout his political career, even in his time as Minister in the 90s, where he was fascinated by a painting by the painter from La Palma, Gregorio Toledo, which he inherited during his time as Minister of Education.

The artistic heritage of the Government Nora Navarro

Although some works remain in their specific and invariable corner in offices or common areas of the Presidency, other pieces follow a rotation scheme that responds, most of the time, to a criterion of topicality, relevance or tribute.

This is the reason why the anteroom of the presidential office exhibits a large-format painting by the artist Lola Massieu, a pioneer of abstraction in the Canary Islands, whose centenary of her birth is commemorated in 2021 (Las Palmas de Gran Canaria, 1921 -2007). Under the title A world in decomposition (1990), this great oil on canvas is part of the last stage of Massieu’s pictorial production, in which the artist opens her palette of colors and languages ​​to combine it, at the same time, with a position of reflection and more activist social denunciation.

This piece, which reflects Massieu’s inexhaustible search for his encounter and disagreement with contemporaneity, was loaned to the Centro Atlántico de Arte Moderno (CAAM) for the large retrospective exhibition Inquietud internacional, exhibited between 2016 and 2017. In addition, the collection It features a second painting by Massieu, dated 1963.

The experimental forms of A decomposing world take over from the painting Fósil Anfibio (1975), by César Manrique, which crowned this same room on the occasion of its centenary last 2019. This piece by the Lanzarote artist in mixed technique on canvas is framed in the stage of the return to his native island after his New York journey and reveals that ideology marked by his defense of the environment and the symbiosis between nature and art. Now, this table is located in the anteroom of vice-presidency.

In the same presidential office the unmistakable Spiral is cut out. Viento de Balos (1977), by Martín Chirino, a wrought iron sculpture that stands as an identity symbol of the master of the forge and that seems sculpted by the breeze. “This is the spiral of the pandemic,” Torres ironizes, in relation to television broadcasts from the presidential headquarters throughout the coronavirus crisis, with the spiral as a backdrop.

In addition, this insignia of the fabulous blacksmith also clings to the background the images projected in the great assembly hall, where the second means of expression that Chirino cultivated is exhibited: drawing. His great serigraphy Espiral del viento (1991) reveals an engraving made on paper and copper, based on the reinterpretation of a sculptural figure already made that adopts the schematic configuration of the sculpture’s design.

Likewise, Pepe Dámaso is the most represented artist in the different offices and rooms of the space complex, with a total of nine works acquired as part of the Government catalog. Among them, his work Mafasca (1981) wraps the Vice-presidency’s office with its ethereal shades in pastel color. Precisely, this month the acquisition, by the Deputy Ministry of Culture and Cultural Heritage of the Canarian Government, of a provisional list of 29 works by Dámaso, selected under the criterion of representation of all the creative periods of the artist from Agaete, was made public.

The artist Manolo Millares is also one of the most reproduced in different spaces of the building, with a privileged place for his emblematic arpilleras, his expressive material par excellence, which shows off his Large-format Painting No. 12, exhibited in the auditorium.

Then, the path that leads to all the rooms mentioned inevitably passes next to the Landscape in Red (1991), an acrylic painting on canvas by the artist Baudilio Miró Mainou, whose centenary of his birth is also commemorated this year (Madrid, 1921-Las Palmas de Gran Canaria, 2000). Its reddened evocation of the island geology, as well as the textures, shadows and reliefs of its rocky landscapes, illuminate the access to the heart of the building, located at the opposite end of the Manrique Amphibian Fossil.

Numerous names complete this artistic legacy, headed, from this list, by pieces by Fernando Álamo and Segunda Herrera, followed by works by Juan Ismael, Toni Gallardo and Óscar Domínguez. In short, a diverse artistic collection that includes a part of the story of the history of art in the Canary Islands and that embellishes the space where the pulse of the daily evolution of the islands beats.