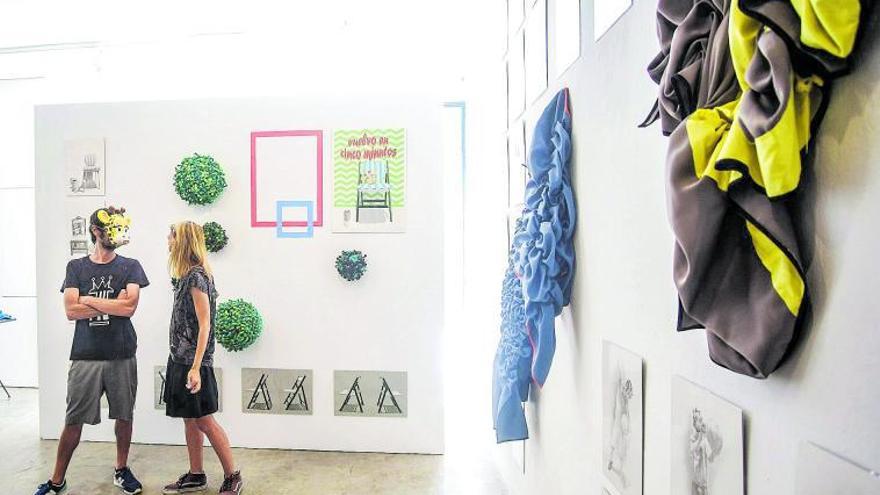 The material experimentation of Julia María Martín González (La Orotava, 1979) weaves her artistic search into the expressive possibilities of fabrics, embroidery and tapestries, while the artist Ayoze Jiménez Villalba (Las Palmas de Gran Canaria, 1978) projects his sociocritical discourse on canvases and murals with hyper-realistic drawings and the language of steet art. In life, both have been sailing in the same boat for 20 years but, in art, their antagonistic worlds converge for the first time in a joint journey, forged as an artistic-naval battle, in the Saro León Gallery.

Under the title Touched but not sunk, the germ of this trip was born from the conflict during the search for formulas to harmonize two opposing imaginaries without colliding in the room. And then, the idea emerged of articulating the montage as a playful exercise based on one of his favorite board games: sinking the fleet.

“After working on several ideas and discarding them, the challenge was getting inside us, because our work is very different,” says Julia, “so when it comes to facing the location of the pieces in the room, we decided to take it. Like a game”.

The result of the game is an exhibition coexistence between two formal languages ​​that coexist in the room since, as the artist indicates, “we do not conceive this exhibition as a group show, but as two individual exhibitions that coincide and overlap in the same space and at the same time ».

But the intrahistory of this exhibition is that, inspired by the «game of boats», the artists reconverted the gallery into a board based on the reproduction of the measurements of the room in two analogous planes, divided into 25-centimeter modules which the squares represent, and where their works of art embody the tiles. Then, each one drew their own individual montage on a grid behind the other’s back: Ayoze, in red; Julia, in blue. And then they developed a real game to confront the itinerary of their pieces-tokens “and bring the runs to the same definitive plane.”

A drawing by Ayoze Jiménez, in the foreground, and next to it, a set of three-dimensional pieces by Julia María Martín. Jose Carlos Guerra

“Then we realized that there were pieces that touched or stepped on each other and, in order not to conflict, we decided that these works would disappear from the room, leaving only a trace or record on the wall,” says the artist. For this reason, this interdisciplinary mosaic houses some gaps, indicated in blue and red as the grids of their respective squares, which correspond to the place where their works overlapped, like two ships touched by the chance of the game and sunk in the void. From the living room. And the rest is water: the between the lines where the works of both establish a dialogue, “that if there is one, it is totally fortuitous”, adds Ayoze.

In this sense, both artists agree that Touched but not sunk materializes a shared adventure “where the creative process has more weight than the result.” “At the moment when we play with our works as tokens, we have counteracted the importance of the pieces to give it to how we have placed them in the room,” says Julia.

For his part, Ayoze admits that “the simple thing would have been to juxtapose both worlds, but that idea is so conventional that it aruña”. “After investigating this form of montage, the game of fortune has determined the location of the work on the walls and we love the result,” he adds.

Her figurative drawings reflect an artistic drift that evolves towards “the disappearance of the character”, while Julia refines the techniques of knitting, embroidery or crochet – “so misnamed feminine, underlines” – with which she weaves three-dimensional shapes from a redoubt of concentration and calm, in the antipodes of our vertiginous social rhythm. “This is the convergence of two unfinished work processes, which are still in full search,” says Ayoze.

Likewise, the exhibition only reveals the legend of this ship map at the entrance of the gallery, where the three planes of the artistic game are exhibited in blue and red. And at the back of the room, a chest gathers a series of joint pieces, drawn with the lines and colors of Ayoze, and sewn with the threads of Julia. Both artists affirm that “in 20 years of coexistence, neither has been contaminated by the artistic discourse of the other, although our only discussions always come from art.” Minutes before this artistic ship set sail at the Saro León Gallery, where it will anchor until July 30, the artists confessed that “we told Saro that this proposal either ended up separating us or it would strengthen us forever.” But Saro León knows in which waters to row.