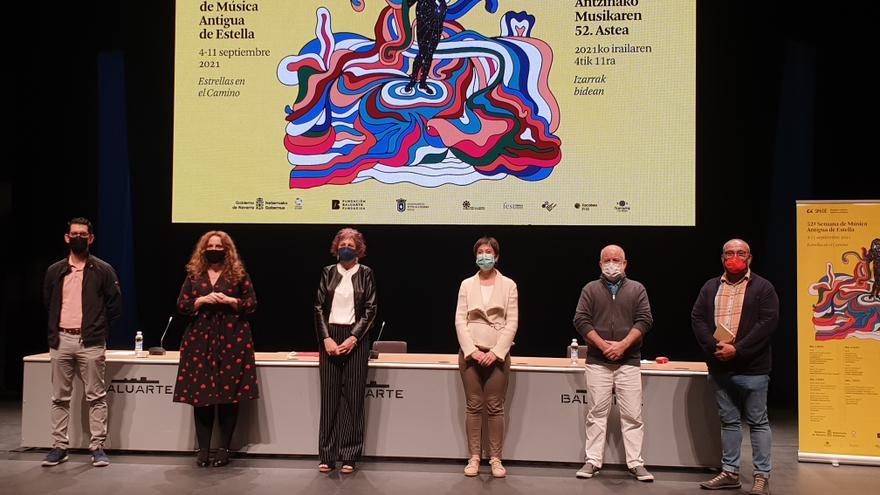 Pamplona, ​​Jun 28 (EFE) .- Estella’s Ancient Music Week (SMADE) reaches its 52nd edition, in which it recalls the enormous importance of the Camino de Santiago in shaping modern Europe and highlights the artistic and musical influences that its layout has left over the centuries in the Iberian Peninsula and, particularly, in Navarra.

During the Middle Ages, the Autonomous Community was the gateway to the Apostle’s domains for those pilgrims from the other side of the Pyrenees, recalls the Navarrese Executive.

The contest will be held between September 4 and 11, under the motto “Stars on the Road”. In this way, it will join the Xacobeo commemorations with a poster that brings together 19 proposals whose programs cover a wide range of periods, styles and instruments in order to offer as complete a perspective as possible of the period that elapses between the Middle Ages and the Baroque.

In her presentation, the Minister of Culture and Sports, Rebeca Esnaola, highlighted that she is presenting a program whose hallmarks will be “quality and the combination of young values ​​with established artists and groups.”

The activities will take place in different enclaves of the city that had already received proposals in the previous edition. The objective of this expansion lies both in the implicit tribute to the pilgrimage routes and in the festival’s desire to relate the material heritage of the community with the intangible and exemplify the way in which both have been nurtured by the Jacobean phenomenon.

In this sense, the artistic director of SMADE, Raquel Andueza, highlighted that in this edition “we have wanted to pay tribute to the pilgrimage routes to Compostela and claim their imprint on the culture, arts and thought of the Iberian Peninsula” .

To do this, it has designed twenty “very different” proposals, which bring together established figures, Navarrese and international artists and promising young people and include a small walking route, a viewing of stars and a program to attract young talents.

The activities will start on September 4, when at five o’clock in the afternoon the Bell Ringer of the Cathedral of Pamplona will ring all the bells of Estella to inaugurate a SMADE with its rolls that will enrich its identity with the Jacobean resonances.

As a complement to the strictly musical programming, it incorporates three novelties closely linked to the Jacobean character of this edition.

Thus, on the morning of September 5, the On the Way activity will allow three emerging groups (El Parnasillo, Ensemble Allettamento and Anacronía) to offer several sessions in three different enclaves (the hermitage of San Miguel Arcángel, the Church of the Holy Sepulcher and the Iratxe monastery), so that people who wish to can move from one to another.

In the same way, in a festival that takes the Camino de Santiago as a reference, allusion is made to the stars, so that on the night of September 8, the director of the Pamplona Planetarium, Javier Armentia, together with the physicist Joaquín Sevilla will offer to the attending public his explanations about the celestial vault, in the suggestive setting of Santa María de Eunate, with his words enveloped by the sounds that Edurne Aizpún’s harp will distill.

One of the main novelties, by its very nature and because it represents the beginning of a new line of action within the contest, lies in the # GeneraciónSMADE program, developed thanks to the support of the Estella City Council.

Vulnerable groups are also specially catered for and thus on September 6 the Artefactum group will bring its music to the La Merced neighborhood, where the Estella-Lizarra City Council is working on a social integration program.