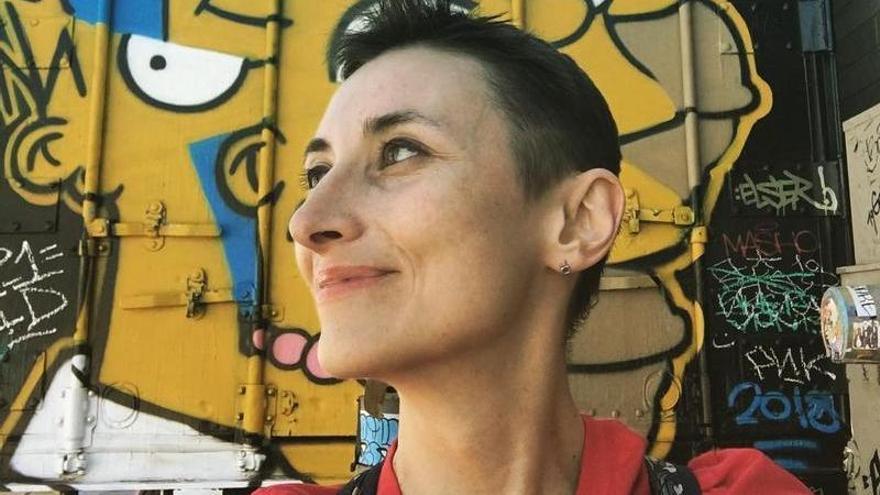 Victoria Lomasko (Moscow, 1978) picks up the call in a huge warehouse with a half-painted mural in the background. She is in Belgium, where she went into exile when the war started in Ukraine and left Russia because the harassment was unbearable. "As soon as I make any comments on my social networks, they will look at my work and they will see that for more than ten years I have been an opponent of Putin," she explains in Russian while an interpreter translates her words. She insists on doing it this way because she wants to expand at ease and at the same time be very precise in her attacks on the president, something that her English does not allow.

For the past several years, Lomasko has kept a low profile in Russia. She was not officially censored, but no gallery owner dared to count on her. At an international level, more and more opportunities arose for her, but that has also turned against her. Victoria is what her government calls a "foreign agent," a dangerous status since sanctions in response to the invasion began. "That category automatically makes you a national traitor and someone to persecute. The best thing you can do is leave before they find you," the Fine Arts graduate assumes.

At a financial level, it was not affordable for him to stay either, since all the accounts and cards that received money from abroad are blocked. "I should have looked for a job in Russia and they would never have given it to me. The first thing they do in the selection process is to google your name and with me they would have gotten a caricature of Putin, which is reason to go to court and pay up to ten years in prison," he says.

Some of the vignettes that would be expensive in court appear in Other Russias (Godall Ediciones), a series of graphic reports that show the other side of a country of 146 million inhabitants that is impossible to homogenize, and less under the figure of its president. . In ten years (from 2008 to 2016) he has drawn skinheads, prostitutes, ultra-nationalists, slaves, LGBT activists or places of emptied Russia. She is convinced that the most problematic would be an illustration from the En feminine collection, where an old lady asks: "Where can I get a Kalashnikov to kill Putin?" "I painted it in front of her, at the time, but they could accuse me of an attempted attack on the president," she says.

Lomasko takes his art as a civic and journalistic exercise: "As a matter of principle, I don't draw from photos or videos, and I rarely make comics. For me it is important to finish my compositions in the same place in the scene, feeling the rhythm and the energy of what is happening. It is a way of accessing where the cameras are not welcome, such as brothels, the interior of a reformatory, the trial against an opponent or ultra-nationalist demonstrations. It is also the most sensitive art form in a country that controls its media. "Censorship has become widespread and the Russian Orthodox Church has merged with the state apparatus," she says, which is why she packed her bags before this book landed her in more trouble.

"I decided to leave because my country was not only becoming a dictatorship, but a fascist dictatorship, and if I stayed I would have to shut up and that means agreeing with what is happening there," he says. The alternative at first was Kyrgyzstan, a post-Soviet space where he could live and work with a Russian passport. But finally they offered him a visa in Belgium that expires in a few months and after which he must apply for political asylum elsewhere.

Lomasko feels caught between two fires. First, in the spotlight of her country, where many dissidents "who are having a terrible time" have been left behind. On the other hand, she appreciates the hospitality of European citizens, but not that of their bodies. The artist has a very vehement stance against boycotts. "The systematic banning of an entire culture and a people seems horrible to me, unlike sanctions. The common people suffer from them, yes, but the economic one is the best way to go against Putin and support Ukraine," compare her.

She herself has suffered from this institutional Russophobia: "Every week I see how they deny me projects in which to participate." For example, a month ago she had approved a painting and sociology course at the University of Manchester and was about to be canceled due to her nationality. In the end, the university agreed to move the consultation among the students and all of them supported that it go ahead. She has also seen that the documentary that she is shooting right now in Belgium about her work loses support at a scandalous speed. "It seems that Putin is going to give them a medal for going against opponents and dissidents. He will be very happy to see how they close all the doors on us," she laments.

"Refusing to collaborate with certain people by looking at their passport and not their position within the country seems to me to be a shame and an absurd mistake. All the anti-Putinist forces should be united," he asks. Just take a look at the mural he is painting on the Belgian ship, full of violent interpretations of the symbols and slogans of imperialist Russia to give them "the opposite meaning to what Putin intends." This difficult duality has been reflected by the legendary graphic novelist and cartoonist for the New Yorker Joe Sacco in a strip Inspired by Victoria Lomasko's life as a refugee.

"I cannot keep quiet while my country launches a brutal attack against another." Although Lomasko's position is openly dissident, she is not as ruthless with her compatriots as other opponents. "All Russian citizens are accomplices in Putin's crimes," she said filmmaker Vitaly Mansky. "It is a personal decision, not a global one. You have to understand that anyone who has a job right now in Russia and takes a stand against the war is going to lose it and never find it again. I am not willing to demand heroism the Russian people in this war and I cannot blame people who have children or are in a difficult situation for not being brave enough", defends the artist.

"The Russians that disgust me the most are those who were close to power, they could have stopped this horror and they didn't. I also hate the official Russian institutions related to art, because they have spent years censoring everything they have could. But I don't hate people who live in misery or in the provinces. For them, life is already hard enough," he continues.

In fact, the comic Other Russias explores these blank spaces of the supposed "Putinian stability". He divides it into two: the Invisibles, which are the outskirts of Moscow, where the different social groups are isolated from each other and have no access to the social elevator or to public space; and the Airados, those opponents who began demonstrating by the thousands since 2012, from the Pussy Riot and the protest over the rigged 2012 elections to the huge 2016 truckers' strike.

"If Russia were a European country, these demonstrations would have led to a change of government or a reaction in power. Because all the opponents, for the first time, understood each other very well. But since we are a half-Asian dictatorship, it ended only with repressions and lawsuits against the organizers," he compares. "Our population has never had access to basic rights that Europeans have known for a long time and the same cannot be demanded of them," says Lomasko.

He laughs at comments like that of Boris Johnson, who addressed the Russian population asking them to find a VPN to avoid media censorship and to read the truth. "Only 20% of the Russian population has access to this technology and in the provinces nobody directly. For them life is not life, it is survival. Their only concern is to have potatoes to feed their children. I understand that they are not interested in finding out of the war," he defends.

She also criticizes those who, from the West, disfigure her and other opponents who do not speak out against the war. "People are taken directly to the police station when they get out of the subway, they don't even have time to take out the banner. Social networks are full of videos in which someone takes out a blank piece of paper, a drawing of a dove of peace or Tolstoy's novel War and Peace and they arrest him," he explains. She assures that even if 100,000 people peacefully took to the streets, it would not stop the war, because "people know that the authorities are willing to use weapons."

Regarding the prospects after the invasion, Lomasko is not optimistic: "Unfortunately, our society is very divided. There is even the possibility of a civil war. But without a doubt, a huge earthquake awaits Russian society and it will change its current state very much.