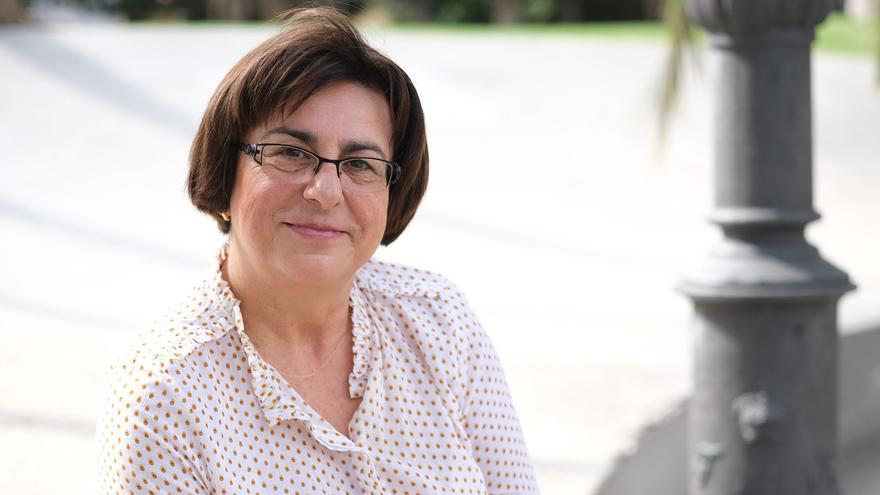 Marivi Gallardo He passed the same roundabout over and over again to go to work. One trip after another by car where he always found the same representation: a penis-shaped graffiti on the traffic sign. «One sees these demonstrations and the obvious, nobody gives importance to these symbols because they consider them jokes, acts of vandalism, but, suddenly, it began to bother me and I asked myself: why?». That little sting gave rise to an investigation that has taken her in recent years to different latitudes. From this concern to investigate the apparently insignificant meanings, the book-essay Fallocracy and society. A multidisciplinary vision from the observation of everyday lifewhich is presented tomorrow at 7:00 p.m. at the Gran Canaria Island Library. A space where the authority of the phallus is questioned.

Throughout the text, the artist shares her concerns and views of the routine with the female architects Elena Lacruz and Noemí Tejera, the psychologists Sara Blasco and Iñaki Mediavilla, the sociologist and anthropologist Lucía González and, to complete this circle, with the pedagogue Javier López Hernándezpromoter of groups of Dissident Masculinities. A wide range that analyzes from different disciplines the manifestations of masculinity in contemporary times and provides a theoretical corpus to photographic work.

Throughout 180 photographs, Gallardo collects the representation of drawing in the Canary, peninsular and world cities. Whether in his hometown or in Tokyo or Paris, he repeats the same pattern: the erect and vertical male member that shows his virility. Two circles and a line. «The images convey ideas and, in the photographic documentation, one can observe the stereotypes and the roles that being a man should have, that is, what type of relationship they should have with affectivity, ego, violence or sexuality.». Why does a teenager teasingly draw a penis on his partner or sketch it on the corner of the table? It is an innocuous question, but one that is transferred to the walls, to the lampposts or to the benches in which this apparent bravado is rampant, although, in reality, it speaks of a historical legacy that resonates in the cultural heritage.

The sociologist Pierre Bordieu and the philosopher Jacques Derrida They have already theorized about phallocentrism and its privileged imposition in the construction of meaning in language, literature, philosophy or hermeneutics, as Gallardo points out in the story. The construction of hegemonic discourses has been done from the masculine, as different historiographical sources show.

Meanwhile, in the common story, some news, even at an international level, speak of this phenomenon, such as the examples in the book. In 2020, two pilots of a Boeing 737 they drew a penis in the sky in support of a Russian national team player who was expelled for leaking videos of sexual content and another striking fact is that there are workers in the Tour de France who are dedicated to erasing the signs on the asphalt.

Change of aesthetics, change of speech

These phalluses, after all, are the early expression of men in their sexual awakening. However, the depth of the graffiti is enlarged when contemplating the context when the hypersexualization of women continues, the commodification of bodies or, on the contrary, the procession of a rebellious chumino saint is scandalous. «What is striking is the overexposure of the member, the ostentation of having it, which does not happen with the female sexual organ.», says the artist.

Likewise, the visual creator cites in the text the philosopher Amelia Valcárcel when he speaks of aesthetics as a natural sign of ethics. Therefore, when it changes, there is usually a process of transformation of values ​​that accompanies it. "There's a whole piece of cultural symbolism that underlies that we're not aware of at all," he stresses. «One fact of this hegemonic and prevailing masculinity is that it constantly has to reaffirm its role. Actually, it is a fallacy since it responds to a social convention».

This project, of which he hopes to make an exhibition later, joins Gallardo's long career. Among his samples, stands out peripheriesthe dance of those left over, which was exhibited at the Nahim Isaías Museum in Guayaquil in 2021; In the midst of your pride (2018) or Flag is female? (2017). In addition, the creator has previously published another book, Think?, 11+2 Images. Now, the opportunity lies in pitting the system against its own contradictions.