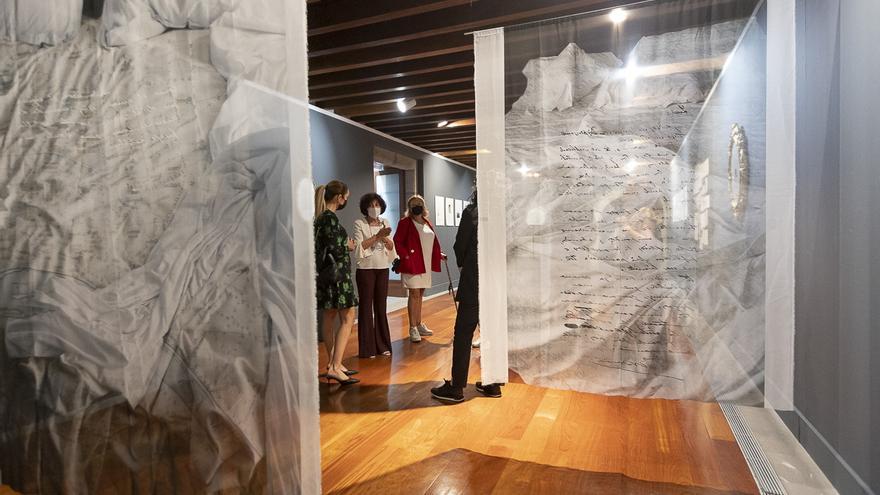 The artist Fabiola Ubani makes a guided tour of the exhibition on January 13, at 6:00 p.m. and 7:00 p.m. Galdós intimate (letters), that welcomes the Pérez Galdós House-Museum since last October. The curator of this exhibition will be in charge of guiding the tour to explain how, based on the epistolary collection of the famous writer, he has delved into the most intimate facet of Galdós and he has done a graphic work in which handwritten letters are incorporated, the spellings that originate from the superposition of pages and the writing that turns into textual drawings. To attend this free activity, with limited places, prior registration is required via email [email protected]. This exhibition can be visited at the House-Museum until January 31, from Tuesday to Sunday, from 10:00 to 18:00.

It is a complementary proposal to the sample in which you can see a graphic work made up of almost thirty works in which the artist incorporates her particular gaze to each physical epistolary element to investigate intimacy. The pieces, made up of lithographs, photography, photoengraving, embossing, digital printing and artist's books, as well as a sound archive, basically focus on the letters that, according to the artist's criteria, were key in Don Benito's relationship with each of his four recipients, Emilia Pardo Bazán, Concepción Ruth Morell, Lorenza Cobián and Teodosia Gandarias.

On the other hand, Ubani will direct on January 25 and 27, in the aforementioned Galdosian museum and in the afternoon (from 5:00 p.m. to 8:00 p.m.), an oriental binding workshop and sumanagashi or Japanese marble, also linked to the cited exposition.

Fabiola Ubani, born in Navarre and graduated in Fine Arts by training, combines his teaching work at the University of Las Palmas de Gran Canaria with an intense artistic production throughout a career of more than twenty years. Interested in engraving as a form of expression, from the beginning she discovers the possibilities offered by the hybridization of the processes of this traditional technique with those handled in other fields related to the multiple reproduction of the image. This led him to incorporate into his work as a recorder the techniques used in the origins of photography (bichromated rubber, cyanotype), the use of the laboratory for the generation of intaglio plates from lith film, electrography as an image transfer tool. and the exploration of the digital image as a resource in the achievement of visual textures and, ultimately, a language of expression in itself.

Making his academic and artistic facets converge, in 2016 he formulated his doctoral thesis under the title 'Graphic art and technology (a private relationship)', in which, following an analysis of his work, he reveals the fluid relationships that always have had engraving and photography, and delves into the concept of what in the field of visual arts has come to be called 'digital matrix'. In addition to his work with the Galdós letters, he has collaborated with the artist José H. Afonso in the folder 'Around Galdós', published by the Cabildo de Gran Canaria in December of last year. This year he also exhibited a part of the project 'Cartas Galdós' within the framework of the First Meetings of Current Art 'The house taken', in the Miller Building in the capital of Gran Canaria.