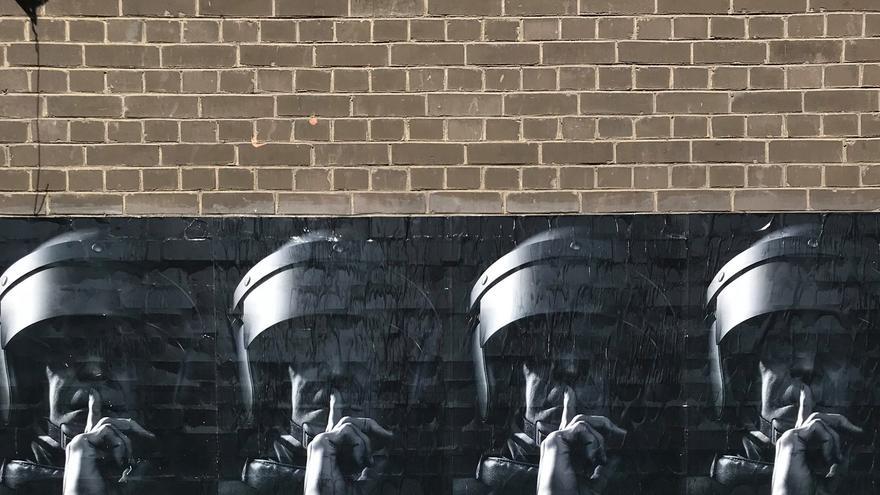 Throughout this interview, in which the group founded in 2006 has preferred to answer the questions in writing, it will be explained that everything is capable of becoming an artistic act. Even a police protest, because “art material can be anything.” But the most accurate definition of art they propose was written by the collective Preiswert, who performed in Madrid in the 1990s and in one of his actions one of the advertising posters intervened on the subway platforms of the Sol stop and distributed leaflets with the slogan of looting El Corte Inglés on Carretas street, the October 17, 1993. The phrase reads: “If the police are after you, you are making art.”

That is what happened to Democracia (Iván López and Pablo España, former founders and members of the El Perro collective) after presenting their work We protect you from yourselves (“We protect you from yourselves”), in 2013, and 18 portraits (2014). They used riot gear photos of the National Police in action – although hiding their identity – before the Organic Law of Citizen Security, also known as the gag law, was passed as a reaction to the outraged movement. They believe that these images are used as a “spectacularization of the repression” in the press. The artists explain that in the media the scenes represent both the brutality of the State and the firmness in the defense of constitutional freedoms. Faced with the ambiguity of this message, they presented the “unexpressed ideology” of the forces of order with phrases incorporated into the photos, under the aesthetics of an apparent advertising campaign.

“We are the rule of law”, “We or chaos” were some of the slogans that they extracted from a text by Luis Navarro, a philosopher and former military policeman, to analyze the intimate relationship between order and the police. It was not the slogans that upset the police, but the use of his image. Democracy was sued by the Unified Police Union (SUP) before the Spanish Agency for Data Protection (AEPD), which determined that the right to create protected artists and there was, therefore, a very serious infraction for which they would have had to pay a fine estimated between 300,000 and 600,000 euros. Did they lose freedom in their legal process to defend themselves from the police authority? “We have gained in caution”, they respond. Now the series is only exhibited outside of Spain.

The price to charge against the abuse of power seems high. “We are not going to complain that by dealing with controversial issues you expose yourself to possible persecution, lawsuits, complaints … in addition to making it more difficult to have greater visibility just because of that. We believe in art as a communicative act and, as such, It has to be public, without thinking about consequences but knowing how far the law allows you to go, “they say. With their proposals they not only question abuses but also the mission of art in society.

On We protect you from yourselves they chose the resources of advertising as a strategy for disseminating the images so that they could circulate “in public space and not only in the space of art.” The production of the series is reminiscent of clothing advertisements in a department store. “This spectacularized image of the riot police alludes to the fact that the social structure is endured by the legitimate violence that supports it, that these are the elementary foundations that constitute it,” they explain.

Last November 27 the police unions called a demonstration in Madrid to reproach the Government for the reform of the gag law, which has not yet begun its parliamentary process. The march was joined by leaders from the right and far right. The group of artists find it “worrying” that the police demonstrated against the “repeal” of the so-called gag law. “That an organization as not very radical as the Council of Europe considers the law arbitrary and disproportionate gag, already tells us that its defense seeks to restrict the right to dissent, to freedom of expression, assembly and demonstration. That some public officials position themselves in this way in front of part of the citizenship, it has to make us think to what extent the police are at their service, respecting their rights and freedoms or their own interests, “they reply in writing.

In 2017 they created a monument to the riot police made of Carrara marble and with a hyper-realistic treatment. The agent appears with his clothing, with one hand he grabs the shotgun that crosses over his chest and with the other hand he orders silence. They titled it Working class. On the pedestal they made visible the discussion held by the bosom of the left about whether or not the police are working class. That is why Democracy believes that the demonstration at the end of November responds “to something as basic as protecting oneself from the consequences of possible irregular actions, through the dissemination of images.”

These artists have suffered the consequences of this protection, which a year ago the Constitutional Court limited by lifting the ban on recording police officers without authorization. “That police officers cannot be filmed in the exercise of their functions is a basic demand of all their unions,” they say and recall that the civil rights movements recommend it. They would like to place their marble monument at the gates of any center of political power, because “all power is authoritarian and repressive even if it has been democratically elected.”

One of the demands of the police unions is that they remain “defenseless” in the exercise of their work with the proposed reform. Democracy does not see the defenseless police: “When you see that artists in our country have ended up being denounced, convicted, imprisoned or exiled for their creations, then you get a very clear idea of ​​where the weakest part is.” That is why they believe that it will be very difficult for citizens to recover the spaces of freedom that are taken from them. With Be quiet, of 2018, they insisted precisely on questioning the message of obedience to authority. They printed posters with the image of a riot police ordering silence and they posted them on the streets of Brussels and the Belgian city of Charleroi.

For almost two decades, the artistic work of Democracia has been committed to denouncing the injuries of citizens’ rights, although they recognize that art is not the only opposition resource, that the most important thing is to denounce authoritarianism and abuse. as it is even “to think and to propose the abolition of the police”. “It is true that at a time of persecution of journalism when trying to document police actions, art has served as a” protected “space from which to assert the right to create to make these issues clear”, reflect the members of the collective.

What generates more suspicion and suspicion: an artist or a riot police? “It depends on the environment. There are places where an artist is suspicious, but generally a riot control produces more suspicion. An artist can be pedantic or heavy, his work can be infumable and cannot even be seen, but you can’t even see it. he is going to jump an eye to look at her “, they answer. The riot control monument piece was also a critique of masterpieces, in which the canon of art acts as an authority demanding absolute obedience. And although, for some artists, the canon is meant to be destroyed because it is the symbol of power, they explain that “the symbolic violence that any artistic canon can exercise is not comparable with real and effective violence on bodies.”

For when a series on judges, laws and abuses in their interpretation? “It is not the first time that they ask us. But at the moment it is not among our objectives.”