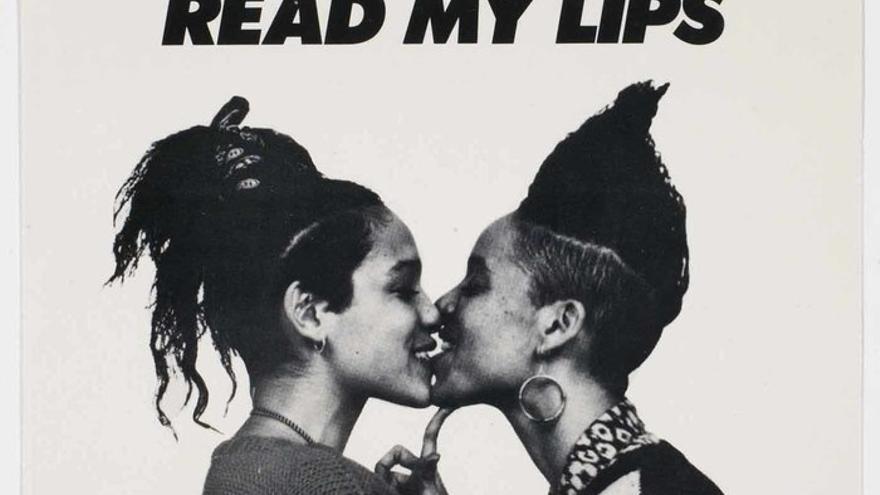 In March 1986 New York was filled with black billboards with two words written in white under a pink triangle: "Silence = Death" (Silence = Death). That was the first iconic image of anti-AIDS activism, which would later be stamped on T-shirts, badges and stickers. And it was also an artistic creation made urgently to circulate outside the museums, using guerrilla art techniques to reach the largest population possible.

While HIV was killing thousands of people, the government's lack of action, silence, lack of funding for research and lack of information, made those affected by HIV themselves stand up to point out the culprits and seek solutions. One of the ways to do this was artistic creation, led by the ACT UP collective, which created the most radical and relevant examples of political art of the late 20th century.

Andrea Galaxina (Santander, 1986) publishes 'No one looked this way. An essay on HIV/AIDS' (The first cry). Galaxina explains that "it was a terrible crisis" and shows "how with alternative strategies such as mutual support, self-organization and care, life could be made more livable." "It is very inspiring to see how activism and cultural production were organized in this crisis. Now that we are in a situation of health crisis, of increased precariousness and the rise of fascism, to see that in history there have been formulas that have allowed people have more dignified lives, it's inspiring, it empowers you," he says.

On June 5, 1981, the first recognized cases of HIV were published in a US medical journal, reporting five cases of homosexual men with a very rare type of pneumonia and cancer.

Ronald Reagan had been in power for six months and with him the repressive policies, which sought to deactivate the activist movements that had grown in the 70s. Feminism, the civil rights movement or the gay liberation movement were enemies for conservative morality . The anti-abortion movement gained enormous strength at this time, supported from the White House. And in parallel, economic policies were cutting access to essential resources for the most vulnerable people.

Homosexuality was still illegal in the United States. Anal and oral sex between adults of the same sex was prohibited, even in private, and someone could be fined or jailed if they wore more than three pieces of clothing that did not correspond to their gender. Homophobia and lack of information about AIDS led to homosexuals being criminalized and blamed for spreading the disease. And although in 1983 it was discovered that its cause was a virus, the media pointed to two types of victims: the innocent, who had been infected by a transfusion or during pregnancy, and the guilty, the promiscuous gays.

Faced with this situation, the activist groups wanted to channel the anger to produce a transformative movement. The most important group was ACT UP, which was committed to direct action and civil disobedience and used artistic tools to carry out spectacular actions. "ACT UP is going to have a lot of influence," says Andrea Galaxina, "in the face of a more affluent or welfare type of activism, it proposes direct action strategies to transform reality. The anger channeled through its actions caused very important changes in how told the epidemic and how the sick were represented". And it also brought about changes in health protocols, since, for example, it managed to include the symptoms of AIDS in women and thus recognize them as affected. "ACT UP put HIV on the agenda and this is part of the rage: if nobody does it, we do it," adds the researcher.

The poster 'Silencio=Muerte' ended up having enormous transformative power and many of the collective's actions were financed with it. "It is the fundamental work of art of the AIDS crisis, its impact exceeds the crisis itself and has been extrapolated to other issues such as homophobia or racism," says Andrea Galaxina. The work predates the founding of ACT UP. It was the idea of ​​a group of people who, in 1986, met in New York to share their experiences on HIV and who decided to take political action and reach out to the lesbian, gay and general population. They all belonged to the world of art, design and advertising, knew the codes that could work and decided that the poster was the tool. The motto would carry the pink triangle with which the Nazis marked homosexuals in the extermination camps. After printing it, they realized that the triangle was upside down, pointing up, and they liked that better: it turned the idea of ​​victims on their head and made them powerful.

New Museum, a museum with an alternative curatorial bent, commissioned ACT UP to make an AIDS-related installation for their windows. This is how the group was born big furry, which made a great artistic production connected with the actions of ACT UP. For the New Museum they made an installation reconnecting the idea of ​​the Holocaust with AIDS, using images from the Nuremberg trials against photos of public figures who had made homophobic statements.

Gran Furry was a group of creators with a very close relationship with the world of institutional art. His first commission for a work of public art was in 1990 with 'Kissing doesn´t kill (Kissing does not kill), which was placed on the sides of buses in many cities in the country. "They collect an iconography present in half the world, that of Benetton. They reuse their images of people of different races, with colored clothes, to criticize the commodification that makes HIV a clothing brand," notes Andrea Galaxina. He refers to the campaign that the multinational Benetton made with a photo of the artist Therese Frare, who photographed the body of a very sick activist surrounded by her family, and who became one of the icons of the epidemic. Gran Furry twisted the Benetton codes and transmitted a direct message: AIDS is not spread by kisses.

These artistic groups are situated within a current in which the traditional values ​​on which Western art was based were questioned: the idea of ​​the author, of originality, of singularity. " They break with this because they make works where there is no author, the authorship is collective. And that are reproduced in an infinite way, that are shown outside the canonical places of art. They are in the street, on the walls, they pass by in hand or on the bodies themselves, when they are printed on T-shirts", explains Andrea Galaxina. "All this is also a reaction to a situation that was taking place in the art world in the 1980s, in which absolute splendor was lived. Money from the stock market and from speculation was invested in art, which became the object of pure speculation, and this type of work breaks with these logics", he adds.

Gran Furry participated with a poster in one of the most important actions of ACT UP. It was at the headquarters of the FDA (the United States government agency responsible for regulating drugs and clinical trials) in 1988. The facade of the building was covered with posters with two phrases: "The Government has blood on its hands" and "an AIDS death every half hour", along with bloody handprints. The action, in which all ACT UP groups in the country participated, was a victory for the movement: the The drug approval process was streamlined, treatments became more accessible, and people with AIDS, people of color, and women began to be included on government advisory councils and pharmaceutical companies.

Gran Furry's influence was enormous. In 1990 they were chosen to attend the Venice Biennale and they did so with an installation that focused on sexism in the AIDS crisis, women's reproductive rights and the use of condoms as prevention.

In the installation there was an explicit photograph of an erect penis in black and white with the slogan: "Sexism rears its unprotected head. Men: use condoms or piraos. AIDS kills women." Opposite, an image of Pope John Paul II, who had made statements against the use of condoms. There was a big scandal and many complaints, even the president of the Biennale threatened to resign if the image of the Pope was not removed. What was achieved was enormous visibility for the collective and for people with AIDS.

During the 1980s and 1990s, anti-AIDS activist art served to turn diseased bodies into political bodies. "There is an unprecedented phenomenon of transforming the patient into an expert in their disease. It is clear in ACT UP, where there are people who, without coming from the world of medicine, become self-taught medicine specialists. And they managed to be part of panels of experts from the US government, from the UN, along with top-ranking specialists," explains Andrea Galaxina.

The only drug approved for a long time to combat AIDS was AZT. Its effectiveness was unclear, the side effects were severe, and for many years it was the most expensive drug in history, costing $10,000 a year. Two members of Gran Furry made the poster 'Enjoy AZT', (Enjoy AZT) playing with the slogan and aesthetics of the Coca-Cola ad. "Thus they criticized that something on which the lives of so many people depend responds to the same logic as consumer products. AZT made activists suspicious: its use had been approved very quickly and a company had a monopoly on its exploitation and could set its price," says Galaxina.

The trail of ACT UP reached Spain in the 90s in Madrid groups such as La Radical Gay and LSD, which drank from theory queer and practiced direct action. "They are very small groups with little capacity for impact, but they are absolutely pioneers in bringing these ideas and ways of doing things to Spain. They have greatly influenced a way of doing activism, they are a counter-narrative to more institutionalized activism," says Andrea Galaxina.