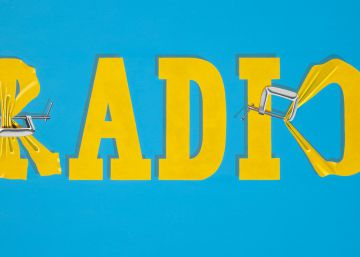 If the applause were a barometer of enthusiasm in the art market, those heard in the houses Christie’s Y Sotheby’s New York's biannual week of billionaire auctions of impressionist, modern and contemporary art were scarce. The weather is too uncertain to encourage sellers to offer their most valuable pieces and buyers are also unwilling to pay a premium for works for sale.

The economic anxiety in China, the protests in Hong Kong, the Brexit, the political rhetoric against the billionaires in the US and the elimination of a tax exemption that benefited the collectors explain that the accelerator's foot is lifted. It's a very different reality than when it was sold two years ago the Salvator Mundi, attributed to Leonardo, for 450 million dollars.
Sotheby's, Christie's and Phillips, the three largest auction houses, this week made sales of around 1,200 million dollars (about 1,086 million euros). That represents a 25% drop from a year ago. It is within what was expected and there was only one piece among 1,950 lots (Hurting the Word Radio # 2, of Ed Ruscha) that surpassed the mark of 50 million dollars counting on the commissions. You have to go back to November 2009 to see something similar.

We had to wait for lot 18 the first night in Christie's so that the public was encouraged. It was with the sculpture Form uniche della continuitá nello spazioby Umberto Boccioni. It sold for $ 16.2 million, setting a record for the Italian futurist sculptor. The scene was repeated a day later at Sotheby's. The star lot was the picture Charing cross bridge, Claude Monet, which sold for 27.6 million, as estimated. But the applause went to Byou d'homme, by Alberto Giacometti, auctioned for $ 14.3 million, twice as expected. The rest except People Strolling in a Park in Parisby Vincent Van Gogh, he complied.

The focus was thus on the painting by pop artist Ed Ruscha (Omaha, 81 years old). It sold for 52.2 million dollars. It is the highest price paid this season, although it was far from the 92 million for which it was auctioned last year Chop Suey, from Edward Hopper, and the 69 million Women as Landscapeby Willem Kooning. Nor did it reach 55.4 million Composition With Red Strokes, of Jackson Pollock.

Christie's raised on the third night 29.5 million with Sur la Terrasseby David Hockney, within the margin. It was what Sotheby's expected with the sale of Untitled XII from Willem de Kooning. Coq, Femme dans a fauteuil Y An assis, by Pablo Picasso, they complied with the minimum. Beatrice Hastings assise, by Amedeo Modigliani, did not even reach the estimate. Neither NUS from Picasso.

The expectation in previous seasons was so high that the current moderation is perceived as almost catastrophic, when in reality it is not so extreme. Blue over redby Mark Rothko It sold for 26.7 million. The return for its owner is enormous when compared to the 5.6 million in which it was auctioned in 2005. The only applause, however, went to PH-399from Clyfford Still, which sold for 24.3 million in a bid that lasted 15 minutes.

The global art market was valued last year at 67.4 billion dollars, the second largest record since 2014. The United States, the United Kingdom and China are the most important countries, with 84% of sales. The auctions moved $ 29 billion in 2018, with five houses splitting half of the cake. Christie's and Sotheby's, which has just been acquired by tycoon Patrick Drahi, are the dominant ones.

Christie's leads the business since the beginning of the last decade. Last year it had sales worth 7,000 million, an increase of 6% compared to 2017 as a whole. This performance was due in large part to the Peggy and David Rockefeller collection, which generated 832 million, 16% of the total reported. It eclipsed Sotheby's, which recorded sales of 5.2 billion in auctions, which rose 15%.

But the market slows and the margin narrows between the two competitors, who fight for each piece. Christie's recorded sales of 2.8 billion in the first half. It is 22% less than a year ago. Sotheby's were around 3,100 million. Contained the fall to 10% thanks to the record of Meulesfrom Monet. They were affected by moderation in Asia, where sales fell 53%, according to Deloitte.

From the department of impressionist art in Christie's attributed the pothole to a contraction of the offer. The slogan of the pieces, they explain, was made when the economic outlook was uncertain. Demand for high quality works below 20 million, they say, is good and interest is growing for artists who were outside the auctions, such as Norman Lewis, which opened with Ritual.

Sales guarantees are another indicator of market health. It is an opaque tool that allows establishing a minimum sale price for the work of art before the bid is launched and serves the auction houses to limit the risk. So Sotheby's and Christie's managed to keep the market alive for the last decade. The pieces sold with this controversial technique hit the ceiling in 2017.

The data shows that it deflates. This change in trend is explained because the expectation generated by auctions is no longer so great. Last year, for example, 40% of the works offered with guarantee were sold in the low range of the estimated price and 12% of the guarantors returned home with unsold jobs, because they did not achieve the expected minimum.
The trend accelerated in the first half of 2019. Buyers are increasingly reluctant to compete against someone who plays with advantage. In fact, the fear of collectors is that these guarantees fueled speculation. What nobody argues is that by limiting its use, the market will better reflect what the real demand is and the result of the auctions will also be less predictable.

‘Miller’ sold out for its official premiere – La Provincia