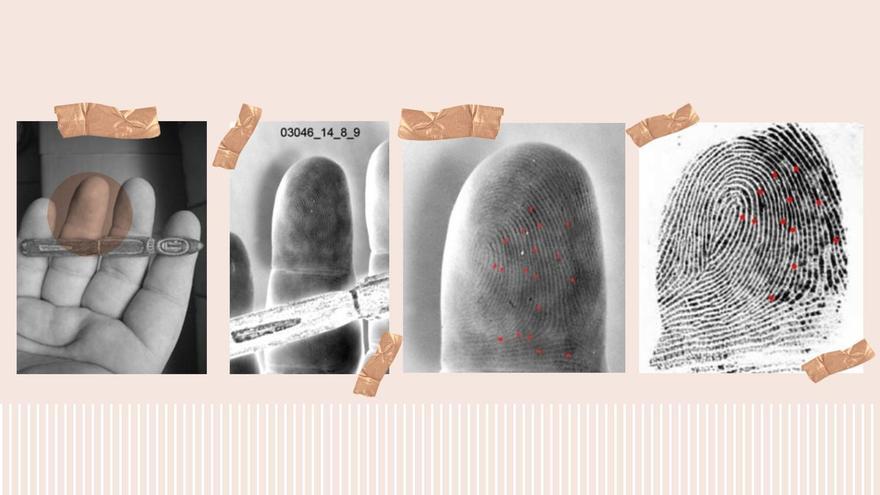 Last May, the Merseyside Police, in the United Kingdom, released an exceptional investigation. He had captured a narco named Carl Stewart thanks to the fact that he had inadvertently posted a photo of his hand. Stewart was fond of Stilton blue cheese and posted a photo of himself holding onto a freshly purchased slice on Instagram. That put him at the scene of the crime. Only his palm was visible but it was enough to identify the fingerprints.

The case He went around the world and came out in all the international press. But there were those who raised their eyebrows. One of them was Luis Monje, biologist and professor of scientific photography. That sounded good to him. In Spain, years before there had been a similar case.

In September 2014, the scientific police received a request from the Historical Heritage Brigade. They had discovered an online auction of protected pre-Columbian pieces. Were small figurinesSo the dealer who sold them photographed them while holding them in La Palma of his hand. It was just one more selfie. With one hand he held the mobile and photographed the statuette with the other. The police only had those photos and the Heritage brigade tried their luck with their fellow Scientists.

Samuel Miralles, a scientific police specialist, recalls the case and the applied technique. “The function of the imaging technology section is to bring out information that we cannot see with the naked eye, to enhance the image for forensic purposes, to enhance the bits in the & rdquor; file.

Miralles explains the details in a room in the Canillas police complex, in Madrid, together with his colleagues who participated in the case. When uploading a photo to the web, it loses quality and the scientific police reverses that process as much as possible. Once the image is improved, refined in contrast and sharpness, go to the identification section. “Let’s go combing the footprint so that it gains contrast and resolution & rdquor ;, explains Juan Cuadrado.

With the combed fingerprint, they looked for the points that identify each person and if it coincided in a police database. “Of the 10 photos, we identified it in seven of them. In three of them there were no necessary points & rdquor ;, adds the agent Elena Ruiz Mediavilla.

In standard identification, the police need twelve matching points on the fingerprint. In the end they had it for three different fingers of the left hand. That was the hand with which the seller held the figurines while photographing with the right hand. The trafficker was a 41-year-old man with a history of property crime.

The case continued its course and in July 2021, Miralles, Mediavilla, Cuadrado and Juan Carlos Jara they published the research in the scientific journal ‘Forensic Science International’. Ana Garcia, head of the Central Identification Unit service, jokes that she was about to move the case in the international press when she saw the repercussion that the British case had had.

Monje explains that the technique is relatively new and that it is not more than four years old and that it is only one of the fields of forensic photography. “The foregoing is only something minimal and anecdotal within the great field of forensic photography, which increasingly encompasses more and more specialties: visible photography, IR, UV, thermographic, fluorescence, luminol, fingerprint highlighting, footwear, vehicles, copy documents, counterfeit authentication, mobile image analysis & mldr; & rdquor ;.

Traces can be identified from a photo of the hand. But not only that. “In addition to the main one (fingerprint information), we can deduce many professions (by their typical marks and calluses). Rings, watches, spots & mldr ;, also provide a lot of information & rdquor ;, points out Monje.

We live surrounded by cameras and more and more, the police come across images that need to be enlarged, processed and improved to identify license plates, for example. “10 years ago, how many people with a camera did you see on the street who were not tourists? Surely less than 0.1%. Now they are the 99% who carry a smartphone with an automatic camera and people photograph and record any event they see. This translates into thousands of graphic evidence flooding the courts & rdquor ;.

The commissioner of the Central Identification Unit, Begoña Sánchez, points out that it is not complicated for judges to accept these tests. “We work with quality standards to defend them in a trial & rdquor ;. The Scientific Police specialists do not deal only with those who send them.

Having everyone wearing a camera gives the police more work, but not just because there is more evidence. “There are also more and more people who know how to edit these photos and can falsify them with enough quality to deceive the judge & rdquor ;, explains Monje. He chairs the Spanish Association of Scientific and Forensic Image that has formed a group of digital authentication: “We try to teach the judges to detect and reject in a simple way any doubtful photo and if it is important, we take action to analyze it and detect from the mobile with which it was made, the areas that were forged & mldr; & rdquor ;. Photos leave their mark.