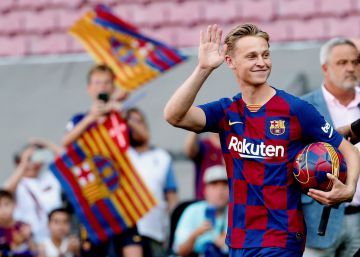 The disputed shirt of the Barça checkered that is not painted to Frenkie de Jong. The new clothing could hardly have a better model than that of the Dutch international midfielder from Ajax, aged 22, signed for 75 million and 11 variables in an operation formalized in January by President Josep Maria Bartomeu. The 19,850 azulgrana fans who met in the stands of the Camp Nou were captivated by the technical details offered by the player in his presentation as a Barcelona player.

To De Jong, photographed alone and in family – energetic partner; excited mother-, he was relaxed and happy, protected by his face of a rogue or his "magic smile" -definition of the speaker in a nod that evoked Ronaldinho- just as grateful with the popular heat that when he left the Cruyff Arena. "I'm looking forward to starting," he warned after sharing a round with the FCBEscola team, kissing the shield and greeting fans who carried a sign from Arkel, their first club in the Netherlands.

"Today begins a new era," Bartomeu announced, "because we have discovered the player we wanted, the one that fits our possession and attack game, a Dutchman that we hope will leave a mark as many of his countrymen have done. He is a very special footballer who has made an effort to come because he was clear that his club was Barça ".

Technical secretary Eric Abidal defined De Jong as a key player to fit in the Barça game: "He has quality, an impressive physique, short and long pass, timed the game, gives him speed and can play both pivot and indoor".

Very expressive with the ball, De Jong responded with short and quick phrases to the many questions asked at the Auditori 1899 of the Camp Nou. "For me the decision to sign for Barça was easy," he said, after confirming that the visit made by Barça president Bartomeu to Amsterdam was decisive. "He told me that they had a lot of confidence in me and that they were confident that he could be a key player in the future."

De Jong loves the Barça style and his yarn with Ajax through Johan Cruyff. "There is a special connection," he replied. "It's great that they aspire to play in a similar way. It was always a dream to play at Barça. " The Dutch midfielder, who usually carries the number 21 and has declared himself an admirer of Messi – "obviously is the best" – did not dare to guarantee as a journalist asked him that Barça will win the League and beat Madrid.