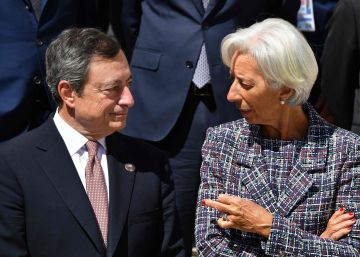 New winds blow in the European Central Bank (ECB). After his appointment is put to a vote in the European Parliament, Lagarde will arrive on November 1 to an organization whose visible heads will be very different from what was until now usual. President Lagarde and Vice President Luis de Guindos will star for eight years the press conferences in which each month and a half will explain the measures agreed by the Governing Council. Both have served as government ministers (conservatives). And none has headed a central bank of the eurozone. This differentiates them from the majority of presidents and vice-presidents that the ECB has had since its founding (although both Wim Duisenberg and Vítor Constâncio participated in governments, both also serving as central governors).

The question seems obvious: What will this new profile bring to the institution that was decisive in overcoming the Great Recession of 2008 and, above all, what role will it have in fighting the next crisis?

"I have a broken heart," confesses Francisco Vidal, Intermoney's chief economist, as soon as the conversation begins. On the positive side, this analyst believes that in the short term the French woman who started her political career with Nicolas Sarkozy will be able to take advantage of her years of work by sewing alliances at the highest level and her contact agenda. "She is a very intelligent woman who has managed to surround herself with a great team. And with a great capacity for communication, something basic to be president of the ECB, "he says. But Vidal is more concerned about the challenges he will have to face in the medium and long term. "The greatest difficulty will come with the next crisis, which will most likely break out when the fiscal and monetary policy tools are almost exhausted. It will then be more necessary than ever the technical profile that she does not have, "he concludes.

The time is gone when, as ironically, a note by ING said on Wednesday, the ECB had a president "who seemed to wake up in the middle of the night and recite all the components of the last indicator of memory. advanced data of the European economy ". "Lagarde will probably be more a moderator than an intellectual genius of monetary policy," the bank continued.

Jorge Sicilia, chief economist of BBVA Research, relativizes the importance of the president / vice president duo, insisting that the ECB Governing Council is a collegiate body in which all its members contribute to making decisions. "If anything, I would have preferred that the decision of the new president of the ECB had been taken away from the rest of appointments in this political negotiation to several bands and for numerous positions." It would have been more neat and sure that the ECB would have squared this option more " , Add.

The other big question is what kind of policies Lagarde will adopt at the head of European monetary policy. And, according to how the markets reacted, investors anticipate that Lagarde will move away from the side of the hawks. In the optimism of the markets it is difficult to discern if it is explained by the conviction that a Lagarde at the head of the Eurobank will not take the whip out of monetary orthodoxy or by having avoided the appointment of the German Jens Weidmann, leader of the hard sector and one of those who sounded like a favorite.

Exchanges across Europe closed higher, with the indices of Italy, Greece, Ireland and Spain leading the rises. The news from Brussels also helped alleviate the debt market, with falls in the profitability of the bonds of all countries, especially the Italian. The euro also gave way to the dollar.

"We believe that Lagarde will continue with Draghi's policies, prolonging monetary expansion for a longer period of time, either through an additional rate cut or by resuming the asset purchase program," says Gabriel Ximénez de Embún, investment director at Credit Suisse Management.

The arrival of Lagarde – added to the imminent departure of the Frenchman Benoît Cœuré – raises the importance in the ECB of the newly elected chief economist, Philip Lane, who remains one of the great connoisseurs of the twists and turns of monetary policy. If nothing is crossed in his appointment, Lagarde will appear after his first Council of Government on December 12. By then, it will be clear if threats such as Brexit and commercial war have been fulfilled and the current economic slowdown is already a crisis. It will be the first test in which the new president will have to show her nose to manage interest rates or devise imaginative monetary policies.

It is impossible to predict what kind of maximum responsible for European monetary policy will be Christine Lagarde. But some of his statements in recent years allow us to track his opinions on the extraordinary measures that the big central banks of the West have adopted in the last decade to fight against the Great Recession. And from them we can deduce a support that would take him away from the theses defended by the most orthodox. "Monetary policy should remain lax while inflation is below its target," he said in his speech in April. A delicate moment for the global economy.

"The big central banks have taken the right decisions," he said in 2012 in reference to asset purchase programs promoted by the ECB, the US Federal Reserve and the Bank of Japan.

"If we had not had negative interest rates, we would be in a much worse situation today," he said in 2016. More recently, after the Fed and the ECB showed that they were going to slow down their monetary normalization process, Lagarde praised this decision. "When the next crisis arrives, something that will inevitably happen, the authorities should use all their tools to maximize their combined effect. This means supporting demand through a looser monetary policy and fiscal stimulus where possible, "he wrote on the IMF blog last January.