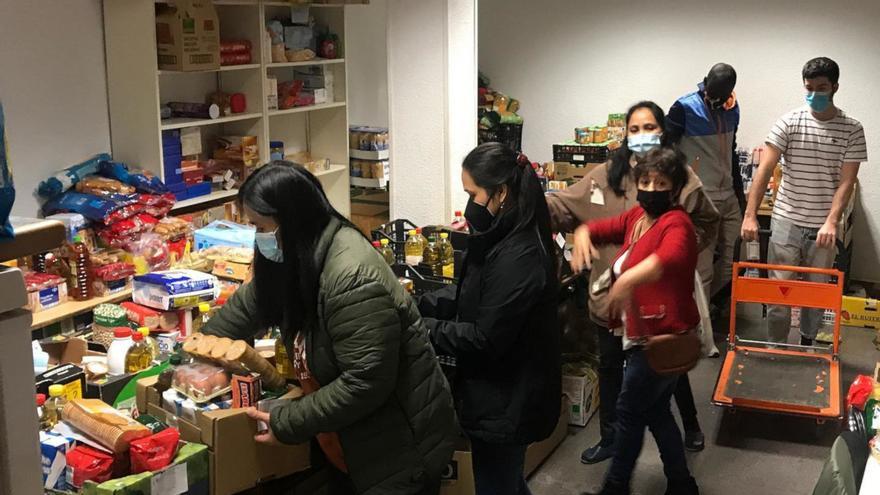 The Neighborhood Area of ​​Arganzuela, known as EVA, is exhausting all possibilities to prevent the Madrid City Council from leaving them without facilities as of next Monday. The residents that make up the project, which has been underway for four years in a wing of the Legazpi Fruit and Vegetable Market, have asked the courts to stop the municipal decision not to renew the assignment of space with precautionary measures. The appeal presented is based on the fact that the group is providing “basic services”, such as the distribution of food every Sunday. EVA operates since May as a self-organized solidarity pantry and serves a hundred families a week.

“In a situation as exceptional as this, in which hundreds of families are suffering the ravages of a health and economic crisis that the administrations cannot fully cope with, it is necessary to keep the EVA Association in the use of the Market of Fruits and Vegetables so that it can continue to carry out the essential activity of feeding the families of the Arganzuela district in a situation of extreme poverty, “says the appeal, which adds one line at a time that, if the building is already returned to the City Council, attended would remain in limbo “due to the collapse of the Madrid Social Services.”

The District Board of Arganzuela, governed by the PP, informed the neighborhood space that it had to return the keys to the Market on February 8. In January, the group requested a four-year extension of the 1,000-square-meter property. It was possible by contract, but it was denied without the possibility of negotiation on the grounds that it is planned to establish a Samur-Civil Protection base in that space. In EVA they consider that it is an excuse and they think that it would be compatible to go ahead with the decision and implement the public infrastructure because there is room for both.

EVA was the first transfer of public space to a neighborhood project which was carried out in Madrid under the framework approved by the Manuela Carmena government to hand over disused places to citizen entities, and which required to attend a merit contest open to those who wanted to obtain them, in order to avoid arbitrariness in this type of awards. His proposal was the winner of the nine that attended. In four years, according to the appeal presented to the courts, the association has developed more than 400 free activities for the neighborhood with the participation of more than 20,000 people.

The neighborhood space consumes the discount time with mobilizations that force the City Council to change its mind at the last minute. Last weekend he called a protest and there is another demonstration scheduled for next February 7 at 11:30 a.m., the eve of your compulsory departure from the Legazpi Fruit and Vegetable Market.

It is not the only case of assignment revoked. The City Council does not want the Chamberí House of Culture to continue to be self-managed by the residents of the neighborhood. This assignment, also agreed with the Government of Now Madrid, ends in March. They will probably be followed by the rest of the spaces assigned as of 2017 to neighborhood entities. Although the City Council assures that it is being studied “case by case”, the PP has celebrated the end of the transfer of EVA through the Twitter account with the following message: “The chiringuitos of Carmena Almeida convert them into public spaces”.