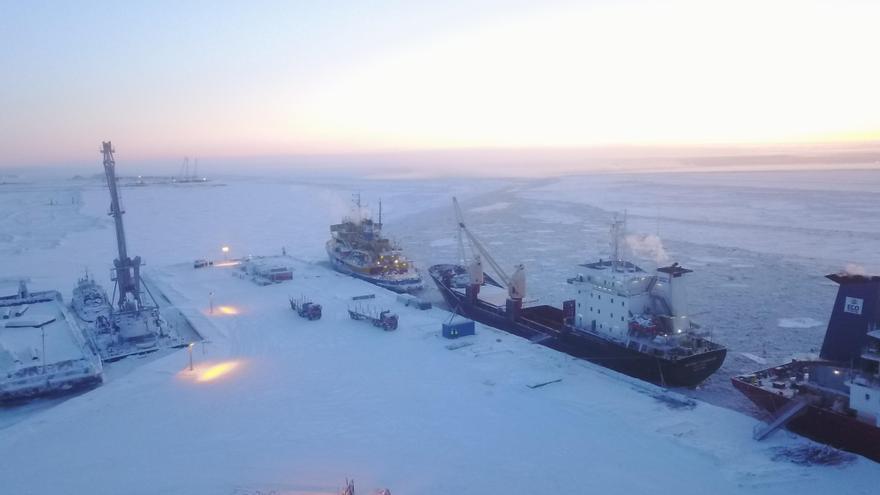 The climate change that is melting the Arctic at full speed is a useful tool for Russia – the world's fourth largest emitter of CO2 – in its conflict with the West over the Ukraine border. The more global warming destroys the frozen northern sea, the more cash register The Russian Federation does with the gas and oil it extracts from the Arctic, transports across an ice-free ocean and sells, in large quantities, to the European Union.

The Russian government is not a public denier of the climate crisis. The country ended up ratifying the Paris Agreement in 2019, four years after its adoption in 2015. But it drags its feet. In fact, last December he vetoed a UN resolution which described climate change as a threat to world peace and security.

At the same time, expects to obtain more and more gas and more coal, (without reducing the level of oil), that is, the fossil fuels that cause the climate crisis. In addition, Russia is "the main supplier of crude oil and natural gas to the European Union", exposed in a simple analysis of the European Statistical Office in view of imports from the EU.

Russia's energy strategy plans to increase gas production by 35% by 2035 (including 52% of coal), According to the latest UN analysis. And the Arctic is full of hydrocarbon deposits that Russia does not give up.

"It has granted tax exemptions to extraction to promote new oil and gas developments in the Arctic region in addition to the production and export of liquefied natural gas (LNG)," reports the work of the United Nations. In other words, converting one of the areas that suffers the most from the greenhouse effect into fields for extracting precisely the cause of this climatic change.

In this context, the President of the Government, Pedro Sánchez, said on Wednesday that a Russian attack would have "massive consequences in terms of sanctions. Very serious for its economy." The head of European diplomacy, Josep Borrell, stated a day before that the Union's response would be "fast, determined and united" since "Europe is in danger" because of this crisis.

Greenhouse gases released into the atmosphere by burning gas, oil, and coal trap heat bounced back from the Sun. In this way, the Earth overheats. And the Arctic does it much faster than the rest of the planet. The latest evaluation of the UN Scientific Panel of 2021 said that its rate was double the global one. However, the reality could be worse: last December a NASA paper stated that the speed was four times higher.

In any case, that heat melts the northern ice at an unparalleled rate. The last 15 years have been the ones that have registered the 15 smallest minima of Arctic ice extension in the summer since there are measurements.

The volume of ice experiences an average decrease of 35% in winter and 75% in summer, according to the Organization for the Exploitation of Meteorological Satellites, Eumestat. To this is added that the ice layer is thinner and thinner: the average thickness, which in 1980 exceeded three meters, did not reach 1.5 meters in 2008. And that means large areas free of ice, a frozen sea easier to break and for longer in the year. A field open to drilling and transportation.

In 2021, the transport of goods on the so-called Northern Sea Route (NSR) – which links the Barents Sea with the Bering Strait through the Arctic – set an absolute record: the ships carried 35 million tons of cargo, 350% more than just five years ago, according to Russia's NSR Public Council, an agency under the Ministry of Transport.

At the head of maritime traffic were oil and gas tankers: "The key cargoes are liquefied natural gas from the Novatek project and oil from the Gazprom project", pick up the agency in your monitoring. The Russian objective is to reach 80 million tons in 2024 and 110 million in 2030, according to the official objectives of the Executive of Vladimir Putin.

The North University of Norway Check the traffic data for this route. In the meltwater season, between June and October, the voyages have gone from 1,651 in 2019 to 1,950 in 2021. The main actors? Hydrocarbon projects such as Yamal LNG, Arctic Gate, Jarasavey Field or drilling.

Russia is not in simplistic climate denial. It has presented its emission reduction plans to the UN and has announced "climate neutrality" by 2060. Is it an active agent against global warming? Their plans have been rated as "critically insufficient" by the organization Climate Action Tracker (CAT).

The CAT is dedicated to collecting and analyzing the announcements and plans that states make regarding their commitments to contain global warming well below 2ºC or even 1.5ºC as established by the Paris Agreement. "If all countries followed Russia's strategy compared to their level of emissions, the global warming of the Earth would go to more than 4ºC at the end of the century", he analyzes. Furthermore, "the country has not made any substantial contribution to climate finance."

Because the Russian Federation is the fourth emitter of greenhouse gases in the world and produces about 4% of everything that humanity expels into the atmosphere. It is the economy that releases the most CO2 in relation to its Gross Domestic Product, that is, its way of producing is very intense in greenhouse gas emissions. It also occupies the first places in gases per inhabitant, reaching almost 18 tons of CO2 per citizen.

It is difficult to lead the fight against climate change if the public budget for the production of fossil fuels has multiplied by three between 2015 and 2019 (they reached 9,800 million dollars), as the UN-Environment has calculated, and it is planned invest in this decade 158,000 million dollars in infrastructure for liquefied natural gas, which is transported, precisely, in ships.

The Ukrainian crisis has pitted Russia and the US against each other along with the European Union. These last two have shown this week their unity against the Slavic country. The North American president, Joe Biden, and those of the European institutions and NATO, together with the leaders of Germany, Italy, the United Kingdom and Poland, promised this Tuesday to a “forceful” response if Putin attacked Ukraine.

And in As for oil, Europe imported some 440 million tons of crude oil in 2020. 27% came from Russia, according to Eurostat.

While the Ukrainian crisis is resolved, Russia admits that climate change exists, but, at the same time, it will continue drilling in the Arctic in search of gas and oil to transport it through an increasingly molten sea because the West buys them. And, meanwhile, the ocean of the Great North, like a frozen sea, disappears. The consequences are felt in the rest of the planet, also in Spain.