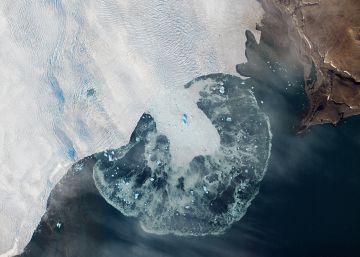 From now on, the world map will officially have five new islands in the Arctic. It is not good news, its appearance is due to the thawing of large areas that are occurring in that area by global warming. In the last three years, oceanographers have discovered more than thirty capes and bays in the area of ​​the archipelagos of Tierra de Francisco José and Nueva Zembla. But not all are officially counted. For this, a confirmation by experts is necessary, which is what has happened with the latter, seen almost three years ago by a student, Marina Migunova.

The university student, who spent hours analyzing satellite photos for her final degree work on board the Vizir, a ship of the Northern Russian Fleet, saw them at the end of 2016, still covered by ice. It has been now when an expedition organized by the Navy of the eastern country has been able to certify its existence after the usual procedure: they sailed to them, landed, and without ice they took pictures and the topographic survey and described them. In addition, they left a plate and a capsule with a compact disc with the images of those who participated in the discovery of these islets whose surface varies between 900 and 54,500 square meters, located in the Nansen glacier area, near the east coast of the New Zembla archipelago.

The trip of that team, which began on August 15 and will last until the end of September, is framed in the ambitious plans of the Kremlin to consolidate in the extreme north of the planet and exploit the enormous resources hidden by the area in its subsoil. Global warming has opened real prospects for exploiting the rich deposits of raw materials, including hydrocarbons, which are found in the subsoil of the Arctic regions. The whole area has gained great economic and strategic importance.

Hence the interest of nearby countries because they are officially recognized sovereignty over parts of this latitude. Russia officially announced its claims in 2001, arguing that the underwater ridges of Lomonosóv and Mendeleev are actually an extension of the Russian continental shelf, but the United Nations Commission, without rejecting or accepting the point of view, requested that investigations be opened about.

It was then when the race began by trying to appropriate areas of the Arctic. Denmark, for example, came into conflict with the hypothesis that Lomonosov's bib is actually an extension of Greenland, —and not long ago the last occurrence of Donald Trump, president of the United States, was to buy it-, while Canada tries to prove that Lomonosov is a continuation of its continental shelf. At the end of March this year, Moscow won a first victory with the recognition, by a UN subcommittee, of belonging to part of the Arctic territory.

During these years, in addition to conducting expeditions to try to gather evidence for their claims, Russia has been determined to boost the commercial route through the Arctic seas with the ambition of make it a viable alternative to the Suez Canal for the transport of goods by ship between Asia and Europe. And to ensure that navigation can be practiced throughout the year, the Kremlin has built a fleet of modern atomic super icebreakers, ships that can advance through layers of ice several meters thick without losing speed or power.

This has been accompanied by an increase in its military presence in the area, the installation of oil rigs and an intensification of the exploitation of raw materials. The last sample has been the sending of the floating nuclear power plant Lomonosov Academician, which sailed towed from Murmansk on August 23 and is expected to arrive in Pevek, on the Chukotka peninsula, from mid-September. There you must give electricity to that port city and supply energy to mining operations, mainly gold.

These activities promoted by the Russian Government have been criticized by environmental organizations, who fear a possible technological catastrophe with the consequent contamination of the area. Not in vain Greenpeace has baptized the Lomonosov Academician as Floating Chernobyl. The authorities, however, minimize the risks, discard the apocalyptic scripts and ensure that they have a program to increase the ecological security of the Arctic.