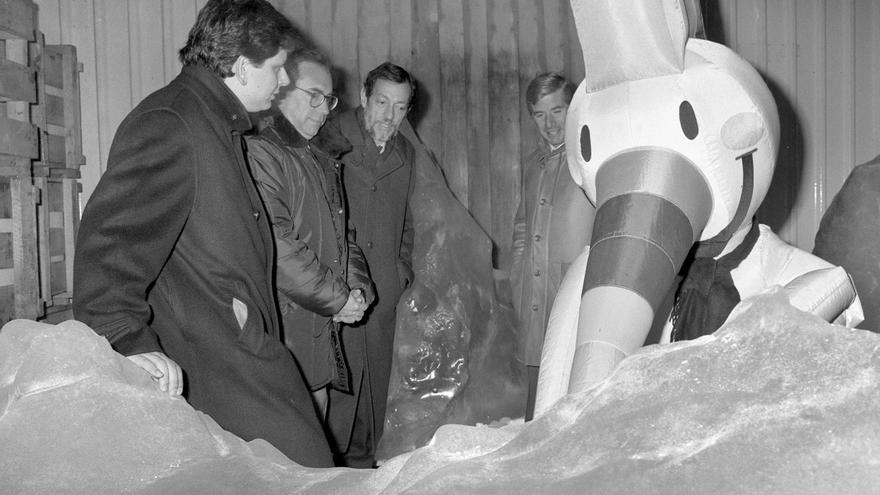 The future looked promising for the first time in a long time: "1992 seemed like the beginning of something," Juan Sanguino writes in As we have changed. The transformation of Spain through pop culture (Peninsula). "The Expo was during that same summer of '92 the place where the future could be visited (before the internet deprived universal exhibitions of purpose)," adds the journalist and writer to locate a vacation in which the country was fought for a instant of the covers of corruption, brick and discouragement. The first wave of the urban development hit the shores of the Mediterranean, the briefcases full of bites came and went and in Seville the architects of the pavilions raised formulas against that model that was already known to be unsustainable for the environment. And for the public purse.

For six months, Seville became the capital of the emergence of passive architectures, which struggled to stop the excess consumption of natural resources. But the vanguard movement served to reinforce the rear. The Andalusian capital turned into the epicenter of the future was the excuse to develop a large-scale operation of "conquering the territory". The provision of infrastructures such as the AVE was the gateway to new territories and more constructions. "The degradation of the territory in Spain has to do with over-construction and that moment was decisive in the process of destruction of the landscape and the natural environment." The quotes are from the historian of architecture, Lluís Alexandre Casanovas, who is responsible for the stellar appearance of architecture and the discourse of the defense of the environment in the new story of the Reina Sofía Museum collections.

This stop at the chapter of Expo 92 in Seville presents a part of the history of architecture pending investigation and a section barely analyzed in the cultural history of the country. In the proposal to eliminate the chapters and compartments, in which the history of art has felt so comfortable up to now, to include a flow of new labels and episodes, the experience of those months is capital in the new museum journey that has raised its director, Manuel Borja-Villel. The reading that Casanovas has made shows the tension between institutional operations and the reaction of a part of the citizenry, against the creation of the high-speed line.

Along with the mockups and drawings of designs such as The palenque, by José Miguel de Prada Poole (1938-2021), hang some posters of environmental demonstrations, which claim the preservation of the natural environment before the arrival of high speed. A photo from the "Unmask 92" campaign sums it up very well: eleven activists at the gates of the Ministry of Public Works and Transport with their pants down and showing their behinds, on which they had their proclamation written. "Train yes, AVE no", could be read when the buttocks of the eleven were joined. Campaigns for the maintenance of the local railway network appear alongside the promise of crossing the peninsula in a jiffy.

There is also room to remember one of the most unfortunate measures of those days and so contrary to the proposals of bioclimatic architecture. In February 1992, a 60-ton piece of ice arrived from Chile, torn from an iceberg. In the press: "Antarctic ice over a thousand years old for the first time in Europe." It was exhibited for the half year that the universal sample lasted and the frozen piece was previously subjected to a treatment to transform it into an exhibition model. After the Expo was over, the ice was returned to its place of origin and this stood out a lot to alleviate the environmental criticism against the bragging.

"The amputation of the iceberg illustrated very well all the controversies about the ideology of the climate. Inside the wooden pavilion they put a large cold room, which contradicted the rest of the architectures that were not very harmful due to the great consumption of energy that it needed to keep the cold. It was the counterpoint. The people who visited him said that he had to put on anoraks, in Seville, in August, to enter the Chilean pavilion. " Lluis A. Casanovas (35 years old, Barcelona) was too young then. It wasn't there, but it has rebuilt the experience of passive architectures.

Casanovas says that at the time we hardly knew that the ozone layer was damaged and that, despite that, architectural proposals were already being raised - since 1987 - that anticipated later concerns such as climate change. He points out as paradigmatic the cases of De Prada Poole from Valladolid and Jaime López de Asiain from Madrid (Madrid, 1933). To the latter we owe the idea of ​​bioclimatic architecture. Both thought of proposals developed in the long term, which could maintain climatic comfort without damaging the environment. "That is the problem of architecture with vegetation, that it takes time and architecture runs too fast. At the Expo, López Asiain was the designer responsible for the entire microclimate experience. They planted vegetation six months before and when it grew it could already be used because it covered and gave shade. Climate comfort needs time ", says Casanovas.

The "bioclimatic roundabout" is another invention by López de Asiain: the idea was to make a cone shape because the funnel accelerates the speed of the wind and cools the space with very little energy. It was necessary to provoke the breeze to lower the temperature of the summer months by eight degrees, without being an air-conditioned environment. "The people who visited it remembered that the feeling of comfort was quite effective," says Casanovas, who has not made a canonical reading of the architecture of the Expo, pavilion by pavilion, but one in which aesthetics and politics are linked .

"What in 1992 could seem anecdotal today are fundamental ideas, such as minimum energy consumption to achieve optimal conditions. In the rooms we wanted to say that architecture must participate in the search for climatic ideas, precisely at a time when they had passed due to several oil crises and the incorporation of air conditioning into architecture transformed it ", says the curator of this part of the Reina Sofía Museum collection.

More than an aesthetic investigation, typical of anthological exhibitions on architecture, this review is a political story about the positioning of architects in their society, but also about the place that museums occupy to tell something beyond "the artistic". For Lluís A. Casanovas, architecture in a museum is important because it is in them where artists develop their work and it is in the cities where they live and interact. "The city and urban development are fundamental for the artist, that is why it is so important to intersperse it with the other discourses of the museum. Here we have made a transversal history and for a wider public", Casanovas sums up his proposal.